The new week will bring more hot temperatures—our first feel of the 90s this year. By the end of the week, some showers may become possible again.

Next 24 Hours: Expect a muggy feel overnight with southeast winds of 5-10mph maintaining low temperatures close to 70 degrees. Tuesday will be a repeat of our recent weather with mostly sunny skies, light southeast winds and high temperatures into the low 90s. The record high to beat would be 92 degrees set back in 2003.

Up Next: Wednesday is likely to be the last day this week with a chance to tie or break a record high as mostly sunny skies again send afternoon readings into the low 90s. Humidity will cause feels–like temperatures to push the triple digits. The upper levels of the atmosphere will cool slightly on Thursday and Friday. Not only will this help to bring down high temperatures but also provide enough instability for some showers and thunderstorms to develop around the peak afternoon heating hours. Over the weekend, a cold front will approach from the northwest. This feature will add even more lift to the atmosphere and increase the potential for afternoon showers and thunderstorms. There are some signs the front could sneak through and lower humidity a bit by early next week. CLICK HERE for your detailed 7-Day Forecast. 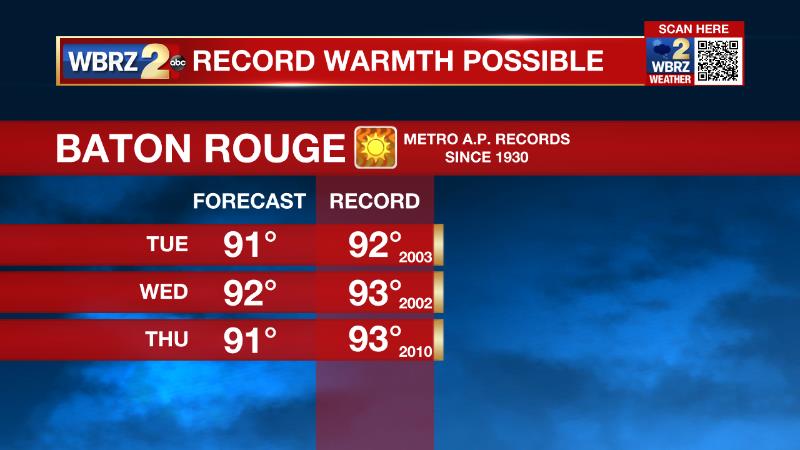 The Explanation: An upper level ridge of high pressure will remain the main weather driver through the middle of this week. This feature will cause sinking air which not only really squashes the vertical motions needed for convection (showers and thunderstorms) but also is a warming process which is helping to contribute to near record highs. Overnight lows will stay above average as well with southeast winds keeping dew point temperatures, and therefore thermometers, in the upper 60s and low 70s. These figures point to a humid feel as well. By Thursday, an upper level trough of low pressure will move westward from the Atlantic Ocean into the Southeast U.S. This system will introduce the cooler temperatures and thus more instability aloft needed to generate afternoon convection. Isolated activity could develop on Thursday and Friday. However, an upper level disturbance spinning through the upper low will really increase coverage in showers and thunderstorms on Saturday. A weak cold front could bring another uptick in coverage on Sunday afternoon. These thunderstorms should be of the typical warm season variety—capable of downpours and frequent lightning. It is toward the end of the forecast period but we’ll keep an eye on the southward momentum of this front to see if it can make it through toe reduce temperatures and dew points by a few degrees.