Layer up, winds to nip through another freeze Wednesday

Temperatures will be anything but fat on Tuesday as numbers will stay below average through Thursday morning. Fortunately, all parades can expect dry conditions. That was not the case on Monday evening. 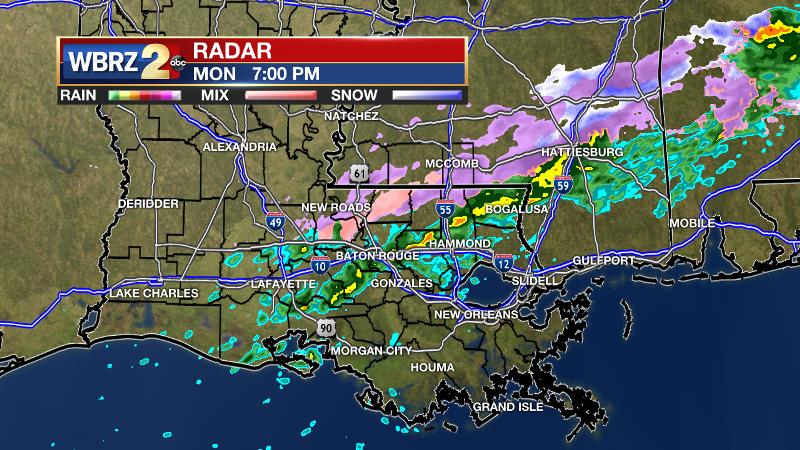 An unexpected batch of showers, occasionally mixed with sleet, zipped through southeast Louisiana and southwest Mississippi between 4 – 9pm. Amounts were inconsequential, but the precipitation itself was inconvenient to parade revelers. The rain and sleet were caused by a very subtle disturbance racing through the mid-levels of the atmosphere. This disturbance was not detected in the morning forecast. Thanks to the rain and subsequent freeze, some isolated patches of ice developed during the early morning hours.

*MOST* areas have dried overnight thanks to wind, but any spots that appear wet this morning could be frozen. Just something to be aware of if you're hitting the road... #LaWX #MsWX pic.twitter.com/ttp8TugmUa

Today and Tonight: Much more sunshine is anticipated for Mardi Gras which may make highs in the upper 40s and low 50s feel a little bit better. Light, north winds will continue though so feels-like temperatures will be in the 30s for most of the day. Another freeze is expected in the northern half of the forecast area overnight beneath mostly clear skies.

Up Next:  An area of high pressure will keep quiet weather around through Wednesday, but this will also hold cold temperatures in place. Look for highs in the 50s and lows just above freezing. By Thursday afternoon, some gradual warming will begin with highs returning to the 60s. The next frontal system will return showers and thunderstorms to the area by Saturday. Above average temperatures will be back as well.

The Mississippi River: At Baton Rouge, major flood stage continues with a level of 42.7’ as of Tuesday morning. Though the classification of “major flood stage” sounds scary, impacts to land are minimal thanks to levee protection. The high water is primarily an issue for river traffic and river islands as well as a few spots north and south of Baton Rouge that will turn soggy along the banks. At this time, the river is projected to crest by late March at a level similar to what was reached last year around 44’.

An area of high pressure will build into the region for Tuesday and Wednesday. This should allow clearer skies but continued northerly winds will keep below average temperatures in place. Another run at freezing will be possible into Wednesday morning. The National Weather Service will continue a freeze warning for most of the area as growing has begun for some specimens. 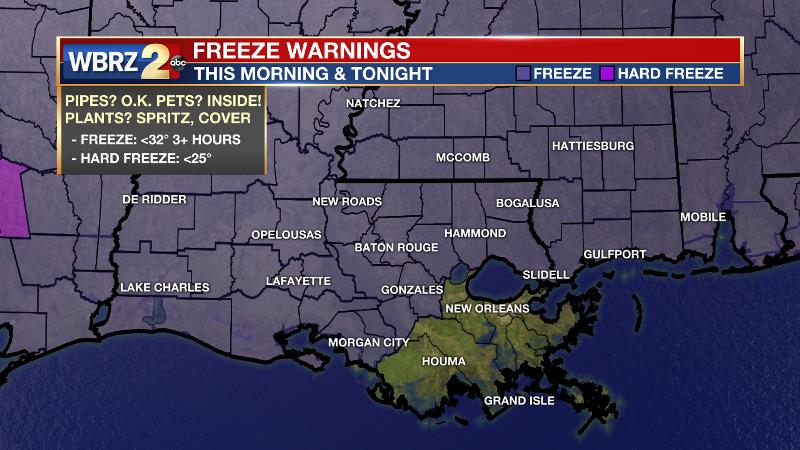 By the middle of the week, the surface high pressure will begin to push away to the northeast and winds will slowly take on an easterly and then southeasterly component. Thermometers will rebound into the 70s and 50s for highs and lows by Friday. The next chance of organized rain looks to come by this weekend. Forecast models hint at a strong system moving through the region Saturday into Sunday. This should bring another round of showers and thunderstorms to the area.