The National Oceanic and Atmospheric Administration (NOAA) has issued a La Niña Advisory. Parts of the United States may begin adjusting for unusual weather during the upcoming cool season.

La Niña conditions are present when sea surface temperatures (SSTs) in in the central Pacific Ocean are 0.5°C cooler than the long-term average (1986-2015). A La Niña pattern is present when these conditions persist for multiple months and seasons. The latest climate models, forecast SSTs remaining 0.5°C below average through the winter. 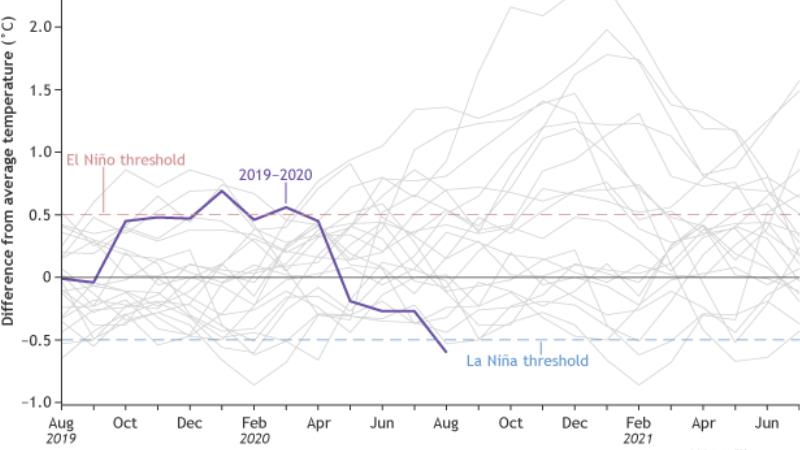 Monthly sea surface temperature in the Niño 3.4 region of the tropical Pacific for 2019-2020 (purple line) and all other years starting from neutral winters since 1950. Climate.gov graph based on ERSSTv5 temperature data. 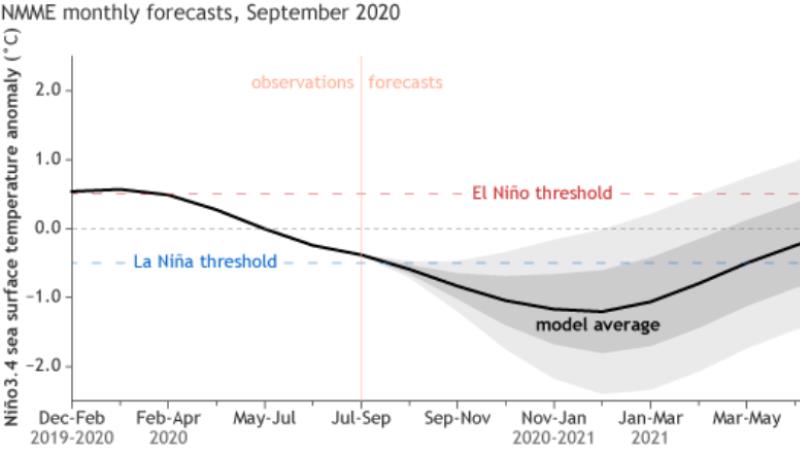 La Niña intensifies the contrast between the warm far western Pacific and much cooler eastern Pacific. This enhances the ever-present circulation in which warm air to rise over the western Pacific, travel east, sink to the surface, and travel back to the west. These subtle changes in climate features are enough to affect weather around the globe.

While every season is different, La Niña (and El Niño) can make certain outcomes more likely. One important global impact is on the Atlantic hurricane season. Anticipating a La Niña, pre-season forecasts called for a very active season due to the resulting reduced wind shear. As of September 10 (the climatological peak of the season), 2020 is on record pace for number of named storms. La Niña winters end up warmer and drier in southern U.S. but colder and wetter in the north.

The WBRZ Weather Team will be here for you all winter long, on every platform. Your weather updates can be found on News 2, wbrz.com, and the WBRZ WX App on your Apple or Android device. Follow WBRZ Weather on Facebook and Twitter for even more weather updates while you are on the go.