Above average coverage in rain and thunderstorms will continue. This will limit highs and create some areas of trouble for the afternoon and evening commute.

Yesterday’s forecast verified well with measurable rain falling in approximately 70 percent of the 13 Parish, 3 County forecast area. Amounts ranged from a quarter of an inch to just over an inch. The heaviest thunderstorm occurred over Livingston, St. Helena and Tangipahoa Parishes where a warning was issued around 1:15pm. No damage has been reported. 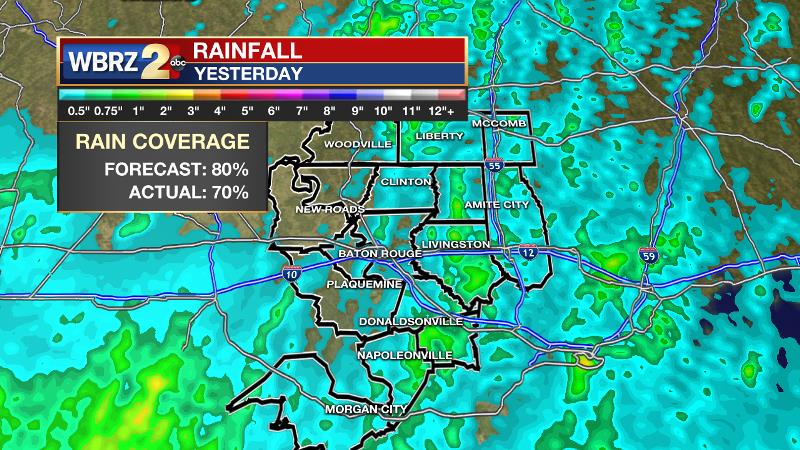 Today and Tonight: Yet another, weaker disturbance will move across the region on Tuesday. We can expect scattered showers and thunderstorms to produce some downpours, frequent lightning and gusty winds—especially during the afternoon hours. Coverage should be lower than Monday with just about 40 percent of the area picking up rain. Highs will make into the upper 80s with lows in the mid 70s.

Up Next: Rain coverage should continue to taper off through midweek, as warmer, more stable air develops over the area. Afternoon showers and thunderstorms will remain possible, as is common in the warm season, but they will be much more isolated. As noted by the National Weather Service, the drier air that will decrease rain coverage, will actually increase the possibility of any storm that can develop becoming strong with gusty wind. Be aware of that possibility through Thursday. High temperatures will get back to average in the low 90s while lows remain in the mid 70s.

The Mississippi River: At Baton Rouge, major flood stage continues with a level of 43.5’ as of Tuesday morning, marking a second crest for the year. Peaking at 44.1’ on March 19, the river set its 7th highest recorded crest at Baton Rouge. At 164 days, this year marks the longest period above flood stage at Baton Rouge. The level will slowly begin to fall, but is likely to stay above flood stage for several weeks to come. The high water will remain an issue for river traffic and river islands, although some inundation will continue for unprotected low-lying areas. The city of Baton Rouge and the main LSU campus are protected by levees up to 47 feet. Some soggy areas and seepage may be noted due to the long duration of high water placing pressure on the levees. As some of the Mississippi River diverts into the Atchafalaya River, gauges at Krotz Springs and Morgan City will stay high as well. This creates backwater flooding in parts of Assumption Parish in areas such as Bayou Chene, Stephensville and around Lake Palourde.

An upper level trough axis was draped across the Baton Rouge area on Tuesday morning. As is common, the majority of the lift associated with this feature is on the eastern side, creating a cutoff in precipitation development around the Mississippi River. 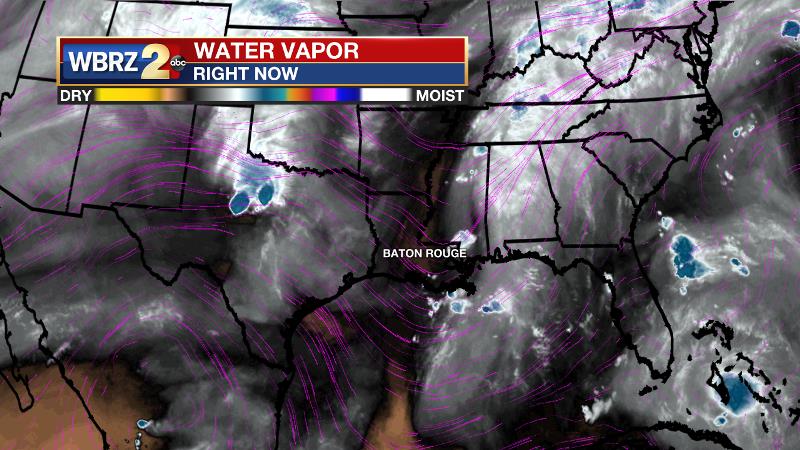