Increasing rain coverage this weekend; Chantal forms in the Atlantic

Simply put, little variation in the weather pattern is expected over the next week. A slight uptick in the coverage of showers and thunderstorms may occur this weekend due to a plume of tropical moisture moving across the Gulf.

Today and Tonight: On Wednesday, look for another sunny start as high temperatures climb into the low 90s. By afternoon, enough instability will be available for showers and thunderstorms to develop. Activity will be scattered into the early evening hours before clouds clear and low temperatures dip into the mid 70s.

Up Next: Rain coverage will remain the scattered status quo on Thursday. By Friday, a weak disturbance in the Gulf of Mexico will allow a plume of tropical moisture to move overhead and enhance rain coverage. Overall, temperatures will be close to average for the time of year, with high temperature “busts” only occurring where rain cooling tamps warming. There are no signs of a major pattern change into early next week. 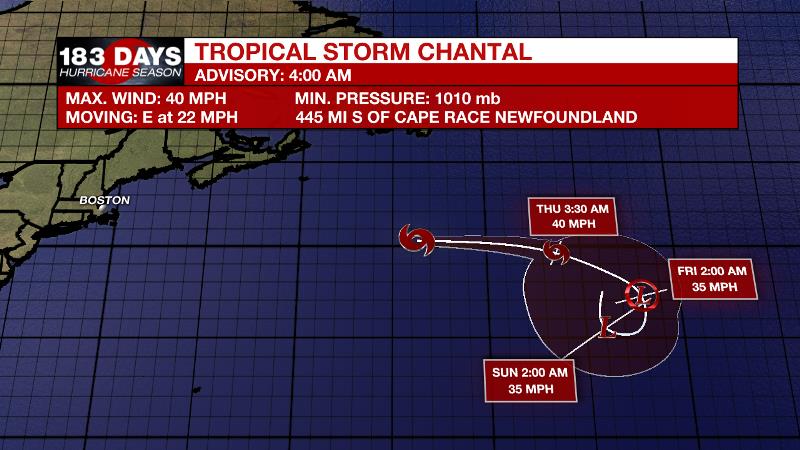 The Tropics: Tropical Storm Chantal formed in the North Atlantic on Tuesday and will continue eastward across the open waters. As of 5am Wednesday, the storm had 40mph maximum winds and a minimum central pressure of 1010mb. Chantal will turn toward the southeast with a decrease in forward speed on Thursday before looping back to the northeast over the weekend. This system does not pose a threat to the United States.

The local area is caught between a ridge of high pressure over the Southwest and Atlantic Ocean. This “weakness” in the upper levels will continue to provide the instability needed for scattered showers and thunderstorms to develop during the diurnally favored times.

Showers and thunderstorms should be "scattered" through Thursday. By Friday and the weekend, activity may become a little more "widespread" (like Monday) due to a a surge of tropical moisture. #LaWX #MsWX pic.twitter.com/J1WcSKV2f3

By Friday, a shortwave trough will move across the southern third of the U.S. as a plume of tropical moisture moves from east to west across the southern Gulf of Mexico. The advancing trough will draw the moisture northward and spread it along the Gulf Coast. The nature of this moisture will be tropical so drenching thunderstorms could lead to some nuisance flooding issues over the weekend. In general, 2 to 6 inches of rain is expected. Locations that get caught under storm downpours and receive the higher end of those totals could experience some brief street and poor drainage flooding.