The pattern will begin to change this week. Look for increased afternoon showers and thunderstorms. In addition, another tropical disturbance may need to be monitored for impact to Memorial Day Weekend plans.

As we've been discussing since last week, a disturbance in the southern Gulf will be monitored by @NHC_Atlantic for increased rain chances along the Gulf Coast over the #MemorialDayWeekend. | MORE: https://t.co/T9j1HDrhT7 pic.twitter.com/o8O7J6MPFA

Today and Tonight: Expect partly sunny skies for the majority of your Monday, with a potential for isolated showers and thunderstorms during the afternoon. This afternoon will likely go down as one of the driest across the area this week. High temperatures will reach into the low 90s this afternoon, cooling into the low 70s tonight.

Up Next: A weak frontal system approaching the local area from the northwest will be increasing moisture and humidity across Louisiana and Mississippi through the beginning of the week. This system will stall, continuing to pull Gulf moisture onshore to keep conditions sticky and allow isolated afternoon storms to develop. Monday through Wednesday will bring highs in the low 90s, lows in the low 70 and about 30 percent rain coverage across the forecast area. The front will break by midweek, but at the same time, as we first told you about last week, a disturbance will likely develop near the Yucatan Peninsula.

The two major computer models hint at another disturbance and Gulf Coast rain potential for #MemorialDayWeekend. This is 9 days away so much can change, but we'll keep an eye for outdoor plans! pic.twitter.com/5XAMcCnjsl

The two key forecast models are in disagreement in terms of track and intensity of this system, with one keeping along the east coast and the other bringing it near the Louisiana coast through the weekend and into next week. In either scenario, increased showers and thunderstorms appear likely Thursday through the weekend. Stay tuned as a wetter forecast could necessitate adjustments to Memorial Day Weekend plans.

The local area will devolve further into the more typical, active summertime convective pattern this week. Daily chances for rain and thunderstorms will be on the build thanks to a weakening upper level ridge, continued moisture return from the Gulf of Mexico and increasing instability each afternoon. The best rain chances will likely come closer to a weak upper level low near spinning along the northeast Gulf Coast. Daily rain coverage will be isolated with about 30 percent of the forecast area receiving rain each afternoon. As that system weakens, focus will turn a disturbance moving out of the northwest Caribbean Sea and into the southern Gulf of Mexico. Forecast models remain in disagreement as to the evolution of this system beyond that point. The GFS model captured this idea first and continued to push a weak surface low east toward Florida over the weekend. The ECMWF model was late to the party but has trended further west and toward Louisiana with a surface low. If this scenario is correct, heavy rain could be a threat for the Memorial Day Weekend. 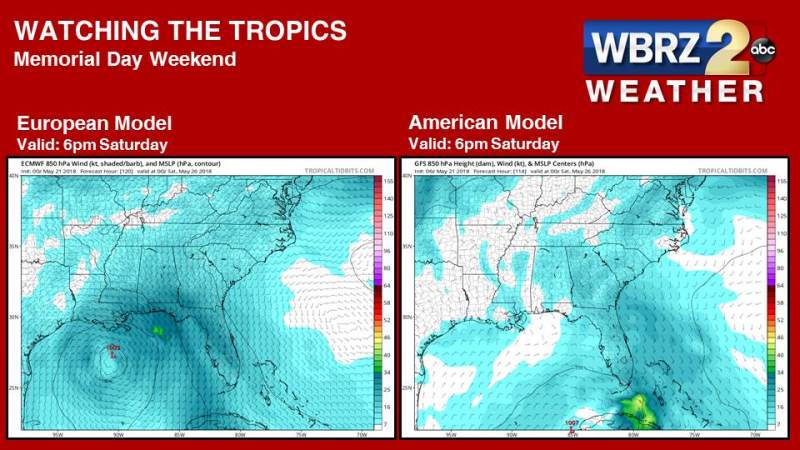 Either way, this system will likely bring much higher rain chances than what occurred during the first half of the month. As afternoon convection gets more active, high temperatures are often held in check, topping out in the upper 80s and low 90s instead of the mid 90s.