Hurricane Season is coming to a close. It was another above average year with the Atlantic Basin once again finishing off the full, 21-name list. While the 2021 discussion will forever belong to Ida, there were a number of storms that affected the United States. The WBRZ Weather Team has listed some of the more significant systems based off of a criteria of meteorological significance, financial losses and fatalities.

#1 – Hurricane Ida: Ida made landfall at Port Fourchon on August 29 with 150 mph winds. Storm surge and extreme winds destroyed the city of Grand Isle. A staggering 172mph wind gust was recorded on a ship in Port Fourchon. Hurricane Ida maintained major hurricane status as it tracked inland through LaPlace. From there, hurricane force winds continued along the I-55 corridor to the Louisiana/Mississippi state line. In Baton Rouge, high winds brought down trees and caused power outages, but the most significant impacts in the WBRZ viewing area were felt in Ascension, Livingston, St. James, St. Helena and Tangipahoa parishes. In Louisiana alone, an estimated $15 billion in damage was done. Ida went on to produce deadly flooding in the northeast, including the New York City metropolitan area. Several tornadoes touched down as well, including a rare EF3 in Mullica Hill, New Jersey. In total, an estimated $65 billion in damage was caused in the United States. Ida would also be blamed for 115 fatalities.

#2 – Tropical Storm Fred: Fred formed on August 11 south of Puerto Rico as a weak tropical storm. Fred then tracked over the mountains of Hispaniola and Cuba, causing the storm to weaken substantially, but dumping flooding rains. Fred re-gained strength over the warmer waters of the Gulf, before making landfall on August 16 over Cape San Blas, Florida with 65 mph winds. The storm would then go on to produce severe flooding across the Carolina's and tornadoes in the northeast.

#3 – Hurricane Elsa: Elsa became a tropical storm on July 1 in the western Atlantic. Elsa then went on to rapidly intensify into a Category 1 hurricane the next day. Elsa's strength was short lived, as it quickly weakened into a tropical storm, crossed over Cuba, and then tracked into the southeastern Gulf of Mexico. There the storm briefly was able to re-gain hurricane status as it tracked off the west coast of Florida, causing rough surf and gusty winds. Elsa then made landfall over the big bend area of Florida as a tropical storm on July 7. The storm would later on spawn tornadoes and dump flooding rains across the northeastern United States.

#4 – Tropical Storm Claudette: Claudette was one of two storms to make landfall in Louisiana this season. The system developed into a tropical storm on June 19 as it moved onshore in southeast Louisiana. Impacts were felt across the southeast, where Claudette spawned tornadoes and produced high winds and flooding rains. Near Slidell, over 9 inches of rain fell, forcing water into homes. Claudette would be blamed for 14 fatalities.

#5 – Hurricane Sam: Sam was a long lived storm, forming on September 22 and not dissipating until October 9. Sam reached a peak intensity of 155 mph on September 26. Bermuda was briefly placed under a tropical storm watch but was spared major impacts from Sam. Using ACE (Accumulated Cyclone Energy), Sam produced the most ACE of the 2021 hurricane season and the 5th highest on record. Since the satellite era, there have only been 12 storms, now including Sam, that maintained hurricane status over 11 days.

Hurricane Nicholas also made landfall in the United States, striking Texas in September. Fortunately, it did not cause any deaths and for that reason we kept it off the list in favor of Hurricane Sam which met some impressive meteorological benchmarks. Notice that a couple of tropical storms were responsible for significant losses of property and life. That should serve as a reminder that all named systems should be taken seriously. 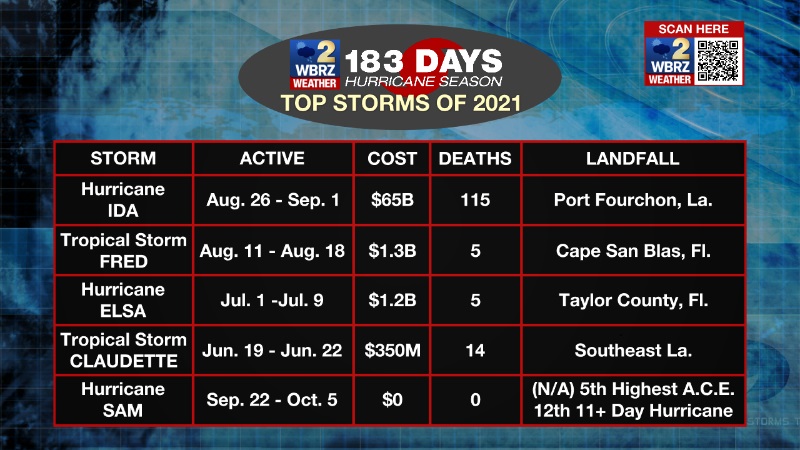 Thanks for trusting the WBRZ Weather Team to guide you through the difficult times in Louisiana. We will have your local forecast right on through May when preparations begin for the 2022 hurricane season.