As of 1 pm Tuesday, Hurricane Sally was located 60 miles East of the mouth of the Mississippi River, moving to the NW at 2 mph with maximum sustained winds of 80mph. A slow forward speed will create major concerns for storm surge and heavy rain near and to the east of center. Sally's forecast track has shifted even further east.

A STORM SURGE WARNING is in effect along the tidal lakes, where 2 - 4 feet of surge is possible as Sally tracks inland. Much higher amounts are expected from Lake Borgne to the Mississippi Coast (4-6 feet).

Hurricane Sally will stay well east of the Baton Rouge area with minimal impacts to the Metro. Some areas along Lake Maurepas and Lake Pontchartrain could have high water (2-4') through Wednesday. Today, expect partly sunny skies with isolated tropical showers in the afternoon. Many locations may not even receive rain. Due to the presence of Sally to our east, expect breezy conditions with northerly winds of 10-15mph and locally higher gusts. Conditions will dry out significantly The week should end on a quiet note with partly sunny skies and just a stray shower Thursday and Friday. A weak cold front could pull the humidity and low temperatures down a bit for this weekend.

Metro Baton Rouge: Any impacts from Sally will be isolated to the individual storms that move through the area. Given the latest forecast, sustained tropical storm force winds over 39mph are unlikely in and around the city. Since the city and surrounding areas are going to be west of Sally's center, rainfall amounts will be very low, just 0.01 - 0.5" over a span of several days.

Locations south and east of Baton Rouge: For areas surrounding Lake Maurepas, Lake Pontchartrain and close to I-55, some elevated breezes are possible, but tropical storm force winds are unlikely. This area is still expected to be west of center but close enough for slightly higher rainfall totals of  1 - 2" over a few days. Finally, 2-4' of surge could still be a problem, especially for south and east facing shorelines during high tide on Monday night. Those with property along the lakes should have completed preparations by now. 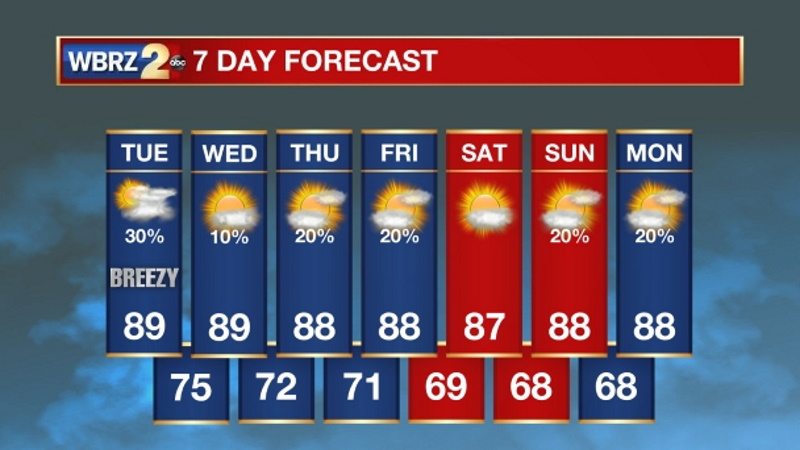