The remnants of Beta will produce a manageable 1 to 3 inches of rain in the Baton Rouge area through Friday. At most, some nuisance flooding could occur, but even that is unlikely. Flooding is happening and will continue for locations along the immediate coasts of the Gulf, Lake Maurepas and Lake Pontchartrain. Persistent east winds of 15 to 25mph have resulted in tides running 2 to 4 feet above normal, especially for south and east facing shores. A COASTAL FLOOD WARNING is in effect until noon Wednesday.

The Tropics: As of 4pm Tuesday, Tropical Depression Beta was producing maximum winds of 30mph and heavy rainfall over southeast Texas. Beta is expected to continue weakening but will move northeast across central Louisiana late Wednesday and Mississippi on Thursday. Heavy rain is possible in southeast Texas and southwest Louisiana. The National Hurricane will no longer issue advisories on this storm.

After regenerating in the northeast Atlantic on Monday night, Tropical Storm Paulette, with maximum winds of 40mph, is not a threat to land. The storm will turn post-tropical, again, on Wednesday. 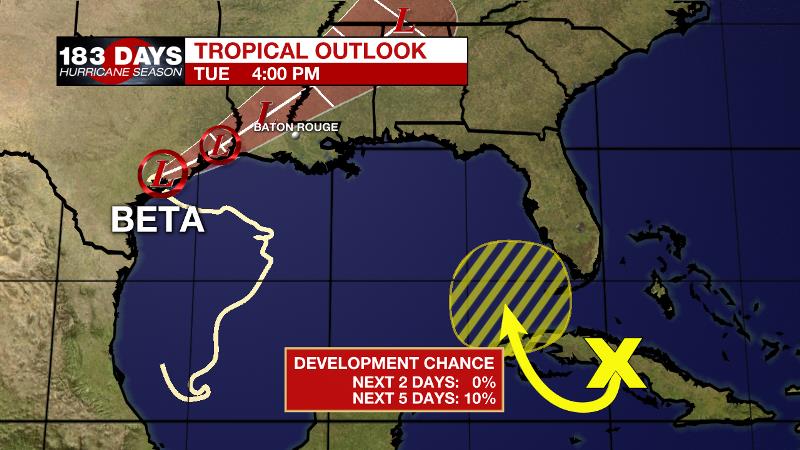 The Next 24 Hours: Mostly cloudy skies will continue overnight with scattered showers. Expect a bit more of a muggy feel with low temperatures holding near 70 degrees. East winds of 10-15mph will continue on Wednesday. Though a peek or two of sun is possible, look for a mostly cloudy day with scattered showers and thunderstorms. Some brief downpours may occur, especially west of the Mississippi River where a FLASH FLOOD WATCH remains in effect through Wednesday.

After That: On Thursday, the remains of Beta will pass due north of the local area. The morning hours will be the final period in the 7-Day forecast when we maintain higher chances for showers and thunderstorms. Pesky clouds may hold on for most of the afternoon even after showers break away. Friday through Sunday will be partly sunny with highs in the mid 80s, lows in the upper 60s and just a stray shower or thunderstorm. A cold front will push through the area on Sunday to dry out and refresh the air mass, though is won’t change temperatures much. A more substantial push of cool air could come during the middle of next week.

The Explanation: Wednesday, the remnants of Beta will lift northeast out of southeast Texas and into southwest Louisiana. An associated boundary (warm front) will be oriented from northwest to southeast across the Atchafalaya Basin. Along and near this boundary, scattered showers and thunderstorms are expected, some of which could be heavy due to the abundant tropical moisture in place. However, the threat for flooding has come down east of the Mississippi River as not much has fallen over the previous few days. Therefore, anything additional should be manageable. On Thursday, the old low pressure center will pass north of the local area. A trough axis will pass through the area with a final push of showers and thunderstorms but that activity should move east by afternoon. 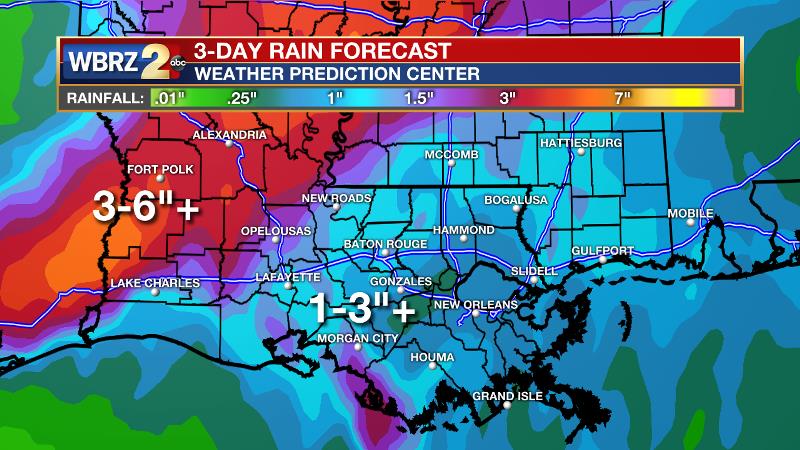 Friday and into the weekend, the weather will trend toward normal for late September. A weak upper level trough in the wake of Beta will remain centered over the local area allowing for some clouds to mix into skies and perhaps enough instability for a stray shower or two. A longwave trough dipping into the southeast U.S. will absorb this trough by Sunday and drive a cold front through the area. This will bring lower dew points (lower humidity) and near average temperatures for early next week. Forecast models are bullish on a strong autumn front moving into the region by the middle of next week.