Front through, two more on the way

Our weather pattern has changed, and it is not finished yet. Another front will pass through the Baton Rouge area over the next 24 hours and this one will reinforce cool air that has already pushed into the region.

Today and Tonight: Actually, the new week will begin much like the middle of last week. With mostly sunny skies, expect high temperatures in the mid 70s and low humidity. Winds will be breezy; out of the northwest at 5-10mph. Overnight low temperatures will be in the low 50s with mostly clear skies.

Up Next: The second cold front in as many days will pass on Tuesday and allow nighttime temperatures to drop into the 40s while afternoons will struggle to reach the 70s. Through most of the workweek, skies will be clear and the air will be pleasant. As we approach the weekend, another cold front will push through the area. This one is shown to be rather potent by forecast models, and could potentially send low temperatures into the 30s. These would be the chilliest temperatures of the season thus far. This front will also bring the next rain chances in the Friday evening to Saturday morning time period.

The Tropics: The tropics are all quiet right now. However, by the end of the week, a broad area of low pressure in the southwestern Caribbean Sea has a 40 percent chance of development. We will keep you posted. 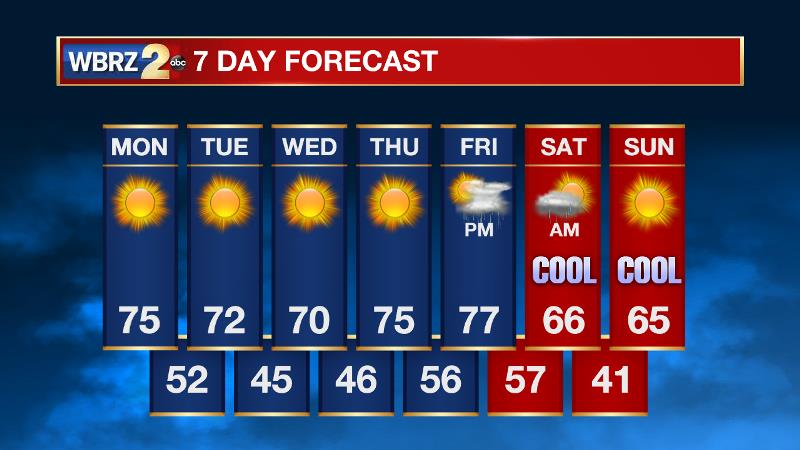 Persistent northwest winds will donate on Monday lending to rapidly clearing skies and the arrival of much cooler and drier air through the day. A sharp shortwave mid-level trough and associated surface cold front will cut across the area on Tuesday. A moisture starved boundary, no rain is expected with little to no uptick in clouds either. The only sign of an advancing cold front will be increasing wind speeds and a significant drop in temperatures. On Tuesday night, lows will have no problem achieving the low to mid 40s across much of the forecast area— just a touch warmer along the coast. The cold pool associated with the trough will stay in place through Wednesday with high temperatures struggling to reach 70 degrees. The cool, dry air mass will continue to support mainly clear skies. For the end of the week, expect a ridge to shift east allowing winds to come in off of the Gulf. With the late fall push of moisture a little weaker, another dry day is anticipated Thursday but temperatures will be a bit more mild. With another fairly cool night but increasing dew points and light winds, some fog could be an issue Thursday night. The forecast gets considerably more difficult and therefore interesting on Friday. Both the GFS and ECMWF model show another deep trough and front moving across the forecast area. However, the GFS is much more progressive with this system and there is a timing difference of almost a day on the front and unsettled weather accompanying it. So, a period of increased cloudiness and showers and thunderstorms are expected either Friday or Saturday. Both model agree that inclement weather will end by Saturday night with much cooler air in place for Sunday. Some lows in the 30s could be possible for the first time this fall season.