Wind, surge and rain from Florence will begin to affect the Carolina coasts today. Amazingly, higher pressure on the western side of Florence will actually lead to nicer weather across the Baton Rouge area.

The Tropics: The Atlantic Basin currently has three named storms and two areas of possible development. Foremost, Major Hurricane Florence is nearing the North and South Carolina coasts. Florence is expected to make landfall in the Carolinas as a category two or three Friday. 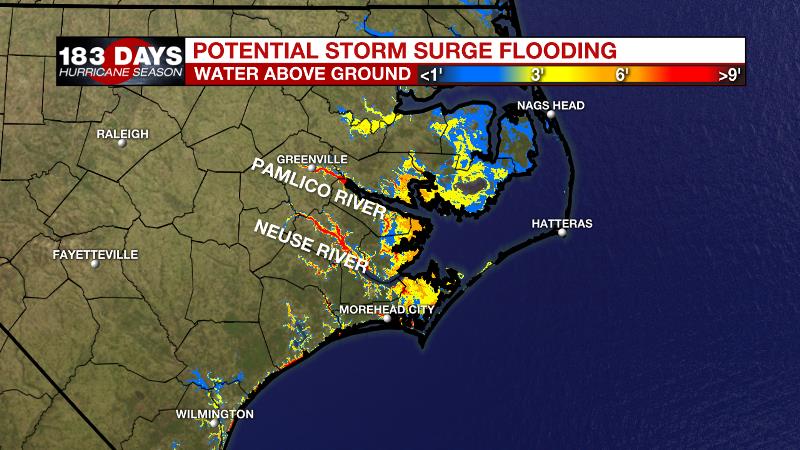 Initially, hurricane force winds and storm surge will be a significant threat along the coast. The National Hurricane Center inundation forecast accounts for a long duration east to west wind flow that will cause water to pile up as high 9 to 13 feet as the flow of the Neuse and Pamlico Rivers reverses. 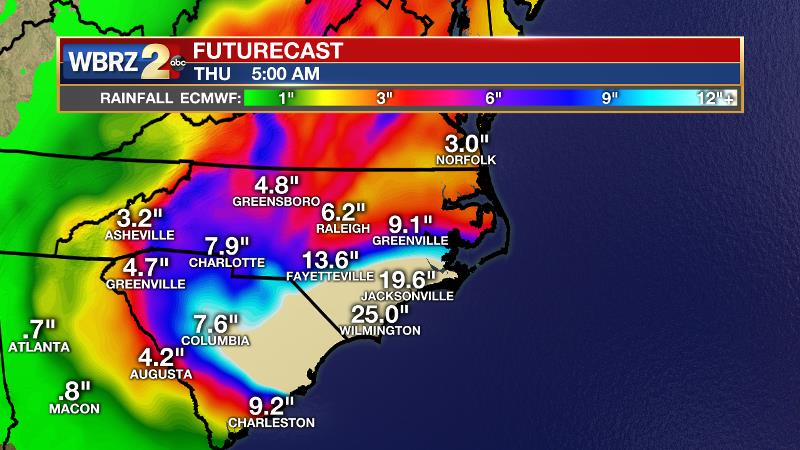 Beyond that, a slow-down in speed may lead a long duration of very heavy rain for much of North Carolina, South Carolina and Virginia—a region that has already seen plenty over the last few weeks. Inland flooding is a major concern. There could be rainfall totals in excess of 20 to 30 inches. Major river flooding is anticipated. Elsewhere, a ragged Tropical Storm Isaac will cross over the Leeward Islands today. The core has nearly opened up with just a few showers and thunderstorms left, but well east of the center. 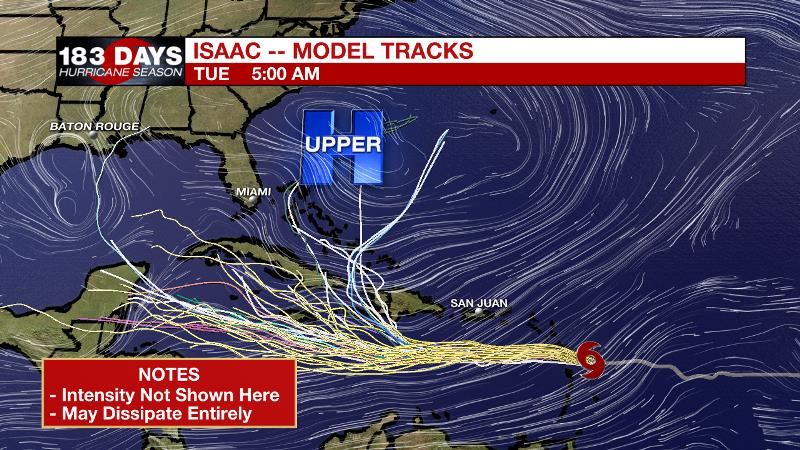 Forecast models have been in good agreement on a track westward across the Caribbean Sea through the weekend but diverge into next week. Some show a hard turn right into the Atlantic. Others carry it west into Central America. Some solutions suggest entry into the Gulf of Mexico. Forecast models have not been consistent on intensity forecasts and may be overdoing it given how weak Isaac has already gotten. 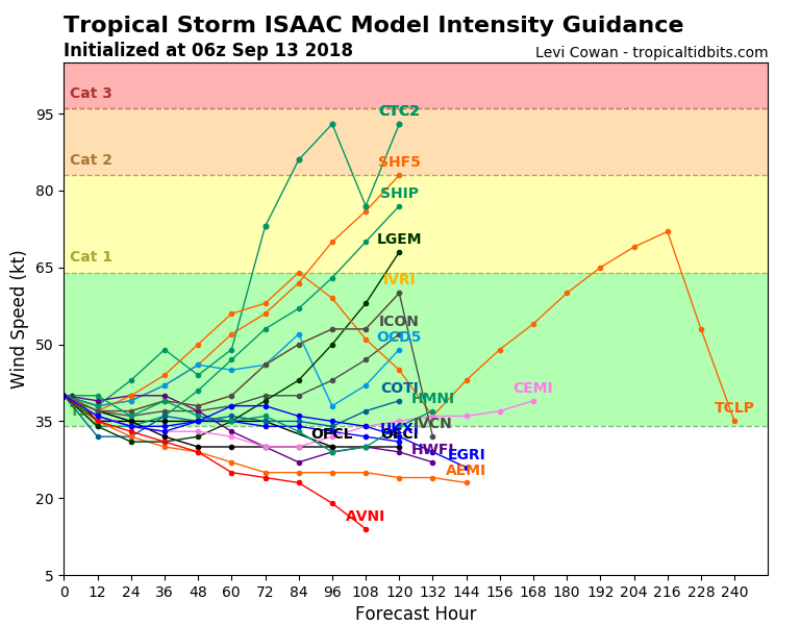 It is likely that whatever path Isaac takes through the middle of next week will be as a depression or open tropical wave. It is too early to make the final call on Isaac’s fate, but is not a cause for alarm at this point. Hurricane Helene is turning north and will remain well out into the Eastern Atlantic, which is where Sub-Tropical Storm Joyce developed on Wednesday. Neither pose a threat to the United States. 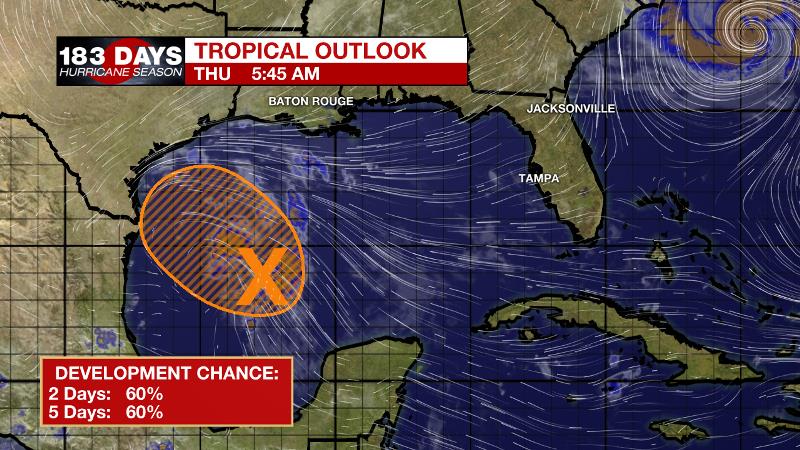 Finally, an unorganized area of showers and thunderstorms in the western Gulf of Mexico is given a 60 percent chance of development by the NHC. The window for organization is small though as this system will move westward across the southwestern Gulf of Mexico, reaching the Texas Coast by the weekend. Other than some offshore swells and an extra shower or two, local impact will be minimal.

Today and Tonight: A slight surge of moisture from a weak disturbance in the Gulf may create a few more showers and thunderstorms on Thursday compared to Wednesday. Otherwise, look for partly sunny skies and highs near 90 degrees. Overnight will be partly cloudy with lows in the mid 70s.

Up Next: The active cycle will continue to ease on Friday and Saturday, as an upper level ridge west of brings a bit more stability to the atmosphere. Isolated showers and thunderstorms, 30 percent coverage, will remain possible during the afternoons. Less activity will allow thermometers to stride for 90 degrees again, which is getting to be above average for the time of year. Even drier and warmer conditions are anticipated into early next week as the area sits on the periphery of the remnants of Florence. 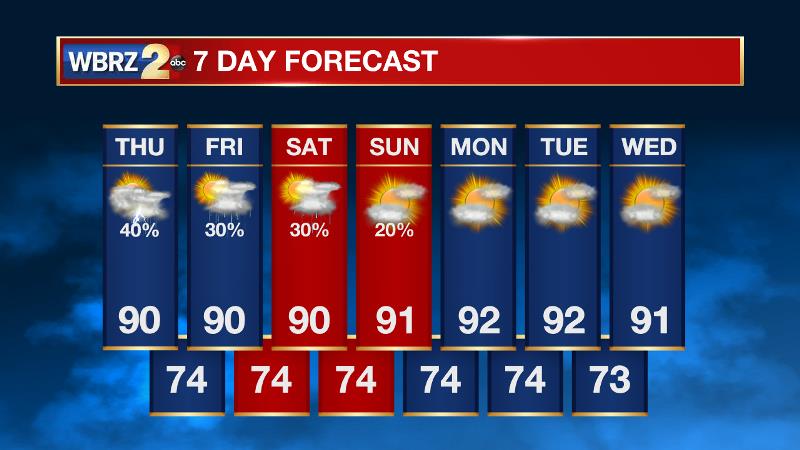 An inverted trough associated with a weak tropical disturbance will move west across the southwestern Gulf of Mexico on Thursday. Some energy and moisture associated with this trough may lead to a little more activity on Thursday than on Wednesday. Additionally, showers and thunderstorms will be possible area-wide rather than being confined to the coastal and western areas. Only isolated activity is expected Friday and Saturday afternoons. That disturbance will move towards the Texas Coast Friday or early Saturday as Hurricane Florence churns in the Carolinas after landfall. Between the two areas of low pressure, a ridge will develop over the interior southeast U.S. and help to minimize convective development. It is a little too early for a definitive call, but this same ridge should also help to keep Isaac away from the local area given how quickly that storm will race across the Caribbean Sea. Of course, with drier afternoons, high temperatures will be warmer and just above average in the low 90s.