A FLASH FLOOD WATCH means conditions may develop that lead to flash flooding. Flash flooding is a very dangerous situation. Be on the lookout for threatening weather conditions and listen for later statements and possible warnings. For more on flooding and how to stay safe, CLICK HERE.

Thunderstorms are expected to become widespread through Monday afternoon. As grounds are saturated from the weekend, it will not take much additional rain to create drainage, runoff and flooding issues. Rainfall rates near or in excess of 2 inches per hour will be common with most thunderstorms. Isolated rainfall accumulations of 5 to 7 inches are possible over the next 24 to 36 hours, including what has fallen so far this morning. 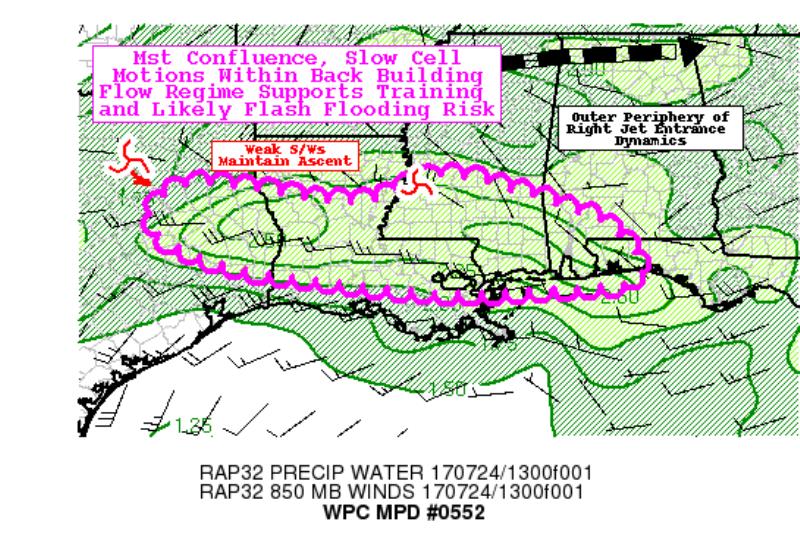 EXPLANATION: A large area with a very unstable and moist atmosphere as well as weak steering winds will create the possibility of flash flooding. The water vapor imagery is showing a trough across the Gulf South and a weak closed low developing in north Louisiana. The lower levels a showing a convergent air mass which is creating uplift to support the development of additional showers and thunderstorms. Given the ingredients mentioned, thunderstorms could produce 2 or more inches of rain per hour, which would lead to flash flooding. High resolution models suggest these trends continuing into the afternoon.

Impacts and Actions: Possible impacts include extensive street flooding, flooding of low lying and poorly drained areas, rises on area rivers and streams, possibly to flood levels if heavy rains persist. Stay in touch with the forecast today with the *free* WBRZ WX App. which sends push notifications to Apple and Android devices if a watch or warning is issued for your location. You can also plug in to the WBRZ Weather Team on Twitter and Facebook. Double-check the forecast before hitting to road home and consider adjusting your route to avoid driving through flooded areas.

Remember: a  watch means “conditions are favorable, and a particular threat could develop” and a warning means that “threat is happening and you should take action immediately.” If a FLASH FLOOD WARNING is issued, seek out drier, higher ground but do not drive across flooded roads as you risk stalling out or being swept away.

For a complete forecast, including the next 7 days, CLICK HERE.