We had a whole two days of fall-like temperatures last weekend. You might have to wait until a little closer to Halloween weekend to feel that again.

The Next 24 Hours: A mostly clear and muggy night is ahead with lows barely dipping into the upper 60s. On Thursday, just enough moisture should be available for a weak upper level disturbance to spawn an afternoon shower or two; the best chances will be south of I-12. Otherwise, look for partly sunny skies and highs in the mid to upper 80s.

After That: On Friday, a weak cold front will push into the area and grab some Gulf moisture to put out scattered showers and thunderstorms. While the front will not change temperatures, it should slightly lower humidity and rain chances over the weekend. If you are looking for cooler air, next Tuesday or Wednesday seems to be the earliest possibility. 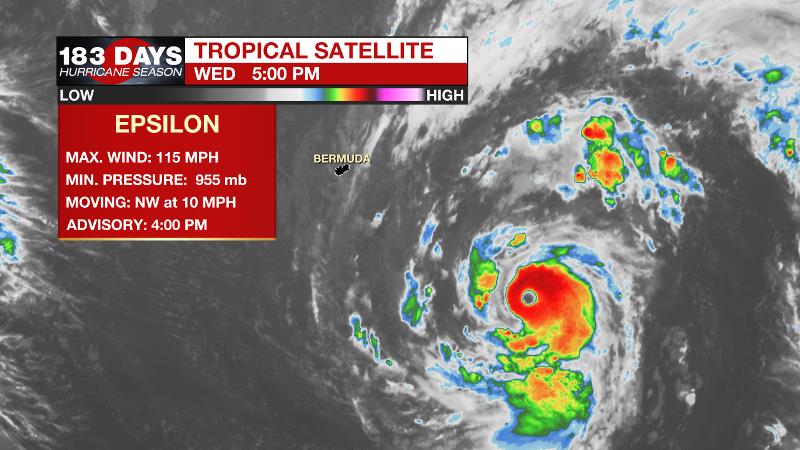 The Tropics: As of 4pm Wednesday Epsilon had become a major hurricane with maximum sustained winds up to 115mph. The storm was more than 300 miles southeast of Bermuda moving northwest at 10-15 but is expected to turn north and spare the island a direct hit. Still, tropical storm conditions are expected. Epsilon will accelerate northeast and out to sea from there.

A trough of low pressure over the western Caribbean Sea has been producing a disorganized showers and thunderstorms. There is a 20 percent chance of development as the system moves north toward the Florida Straits and the Bahamas.

The Explanation: A weak upper level trough advancing from west to east across the southern third of the country will try to stir up isolated to scattered showers and thunderstorms Thursday and Friday. Neither day will bring substantial coverage or amounts. Friday is the more likely to see showers but even then, about half of the area should stay dry. Well above average temperatures will continue even as showers enter the forecast Thursday and Friday, the numbers will only fall by a few degrees and stay above normal. The upper level trough will send a weak front, more like a wind shift boundary, through the area on Saturday. This should create slightly lower humidity and rain chances. A cold front may finally enter the area by about Tuesday of next week but forecast models are struggling to agree on the specifics of this scenario. The American model suggests more of a classic, late-fall pattern involving a strong upper level trough and front leading to strong thunderstorms. The European model stalls the upper trough to the west and brings a weaker push of cool air to the region by the end of next week. As the upper level features enter the western U.S. and begin getting sampled by upper air balloons by the end of this week, the details should become more clear.