Like the weekend, scattered to widespread thunderstorms will be possible across the area. The National Weather Service Weather Prediction Center has issued an outlook for excessive rainfall in parts of southeast Louisiana and southwest Mississippi. The greatest threat for street and poor drainage flooding will be along the coast.

Today and Tonight: Showers and thunderstorms will be ongoing near the coast for the morning hours. After some early sunshine, action will break out inland as well. The thunderstorms will be the pulse variety, meaning they will not have much motion or speed. Therefore, in raining out over essentially one location, 1-2 inches can be expected for most with 3-4 inches where the heaviest storm park. Some nuisance flooding issues could be the result. High temperatures will be near 90 degrees and then low temperatures will be in the mid 70s as inland showers end overnight. 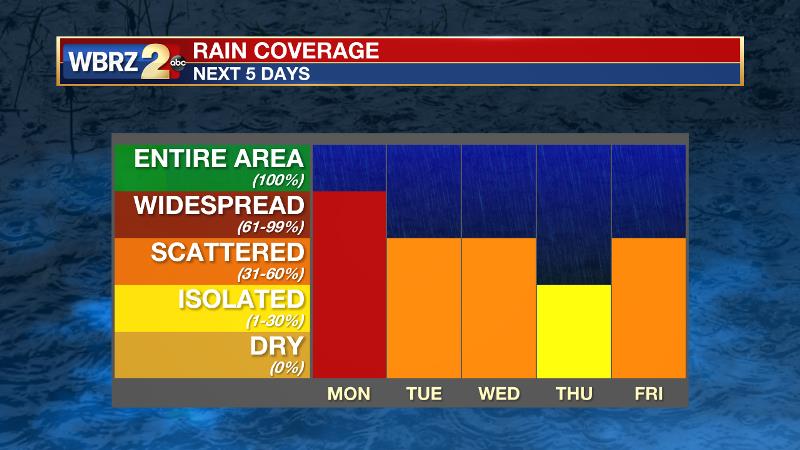 Up Next: The Bermuda High has kept its influence over the eastern Gulf, which is allowing surface winds to be out of the south. This southerly wind will keep dewpoint temperatures elevated, and the atmosphere primed for showers and thunderstorms. Rain coverage will slowly tick back into the scattered or isolated categories later in the workweek, as an upper level ridge of high pressure over northern Mexico, will shift east. A weak Gulf disturbance could develop later in the week to enhance rain coverage once again, but forecast guidance is not yet definitive. Overall, temperatures will be close to average for the time of year, with high temperature “busts” only occurring where rain cooling tamps warming. 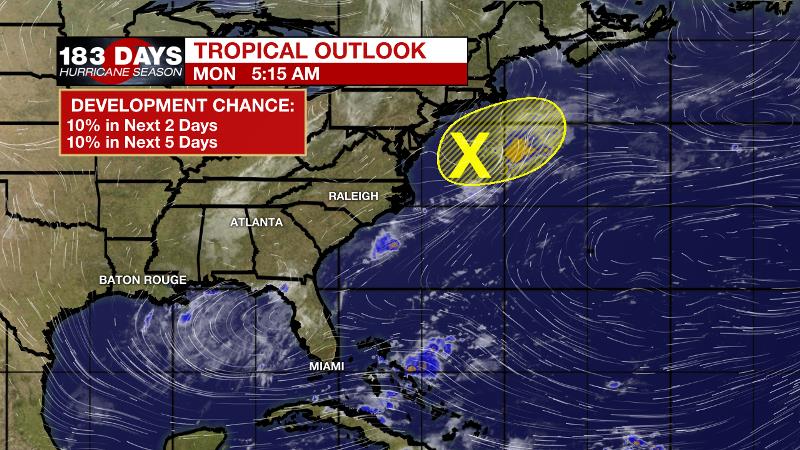 The Tropics: The Gulf of Mexico, Caribbean Sea and Atlantic Ocean are quiet. A weak disturbance east of New Jersey is given a 10 percent chance of development as it races out to sea. With no named storms since Barry on July 15, should nothing develop through Monday, it would be the first time that stretch of time has been named storm free since 1982, which was a historically quiet hurricane season.

Efficient rainfall rates with thunderstorms will be the main weather issue early this week. Gauged by “precipitable water” values, when these numbers are over 2 inches, atmospheric moisture is considered high. Monday’s precipitable water will check in around 2.5 inches.  Adding to the threat for heavy rain, these thunderstorms will be very slow moving. Fortunately, they will rain themselves out though. Either way, rainfall rates could cause a lot of water in a short time which could overwhelm some drainage systems. A storm producing rainfall at a rate of 3 inches per hour could lead to flooding of low lying and poor drainage areas. In sum, the total rain forecast will be for 2 to 4 inches with localized higher amounts possible—mainly near the coast. Scattered action could be heavy on Tuesday too, though the numbers of showers and thunderstorms should be lower. Some slightly drier air could keep coverage isolated Wednesday and Thursday. By the end of the week, a shortwave trough of low pressure will move southeast across the Great Lakes and Northeast. This will pull an inverted upper level trough to the north across the Gulf of Mexico. The combination of these two features should not have significant impacts to the forecast area, but will maintain a moist summer pattern with elevated rain chances through the period.