Crete, Greece struck by 6.5 magnitude earthquake; at least one person killed, others injured

CRETE, Greece- The Grecian island of Crete was rocked by an earthquake with a preliminary magnitude of 6.5 Monday, the European-Mediterranean Seismological Centre (EMSC) reported.

The earthquake had a depth of 2 kilometers (approximately 1.24 miles), according to the EMSC. 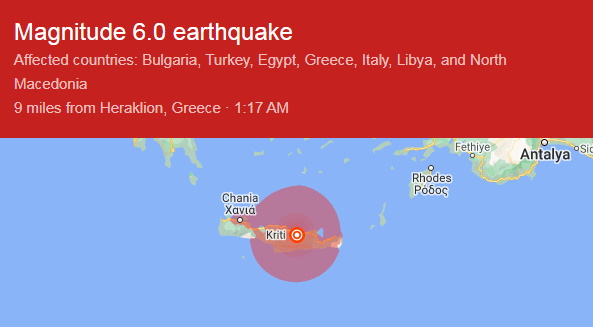 Some international news outlets are reporting that one person was killed when a church dome collapsed.

According to The Jerusalem Post, local police said it was a man died when the dome of a church in the town of Arkalochori caved in during renovation works.

Civil protection authorities additionally reported that nine people were injured in the quake, which damaged many buildings.

Crete, the largest and most populous of all the Greek Islands, has a population of more than 634,000 and is in one of the most earthquake-prone parts of the world.

Despite Crete's high occurrence of quakes, most of the events cause little damage and fatalities are rare.