Coronavirus continues to expand its reach in Asia

The coronavirus continues to expand its reach across the globe with Japan's health ministry confirming two additional cases Tuesday. This brings the total number of confirmed cases in Japan to six.

CNN reports that the sixth patient, a man in his 60's, has no history of visiting Wuhan, but is a bus driver who drove tour groups from the central Chinese city for nine days.

This is the first case of suspected human-to-human transmission in Japan from someone who did not travel to Wuhan.

On Sunday, China announced a ban on outbound group travel as part of measures to stop the spread of the Wuhan coronavirus.

There, the death toll from the outbreak topped 100, with more than 4,500 cases in the country's mainland.

Authorities in Hubei, the Chinese province at the center of the outbreak, said an additional 1,300 cases had been confirmed, which brings the total in the region to over 2,700. 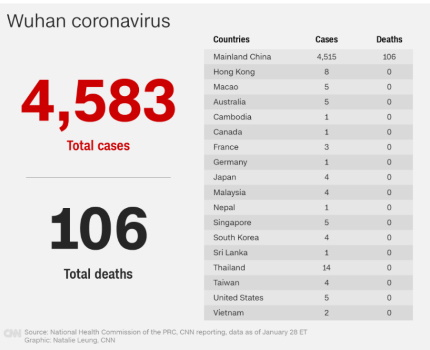 The majority of those infected are still in the hospital, with more than 125 in critical condition.

Between Sunday and Monday, there was a 65% jump in the number of reported cases in mainland China, from around 2,700 to over 4,500.

On Monday, the U.S. Centers for Disease Control (CDC) issued a maximum level alert, warning against "all nonessential travel to China."

In the U.S., the CDC reports five confirmed cases of the virus. An additional 73 people have been tested and are awaiting results.