Cool air for Christmas? Carl Rossby might be your Santa Claus

‘Twas the night before Christmas and all through the house, the air conditioner was running because we live in the south. That’s how it goes, right?

Last holiday season, the Baton Rouge Area was on a heater. The high temperature reached 78 degrees on Christmas Eve. Then, the thermometer did not dip below 62 degrees for the rest of the year which culminated in an 84 degree record high on New Year’s Eve. Now you remember last winter, right? It was the one that did not have a first freeze until January 2—the third latest on record.

With December 2022 off to a sweaty start, cool weather lovers are surely saying, “No! Not again!” So, will this warmth welcome Papa Noel into the bayou?

When it comes to answering a question about weather over ten days away, any skill in forecasting exact temperatures, rain chances and other conditions is lost. However, identifiable broad patterns and an understanding of the foundations of meteorology can help in forecasting trends and probabilities relative to average.

One of the building blocks of meteorology is understanding that the atmosphere is a fluid, just like the oceans. In rotating fluids such as the ocean and the atmosphere on Earth, there are naturally occurring planetary currents called Rossby waves.

The waves were named after meteorologist, Carl Rossby. Born in Sweden, Rossby came to the United States after extensive and groundbreaking studies in geophysics, meteorology and oceanography. After time at Massachusetts Institute of Technology (MIT), Rossby would become a citizen of the U.S. in 1939 and the Director of the U.S. Weather Bureau. One year later, he also became the chair of the Department of Meteorology at the University of Chicago. It was there he turned his attention to large-scale atmospheric motions and identified waves in the atmosphere. 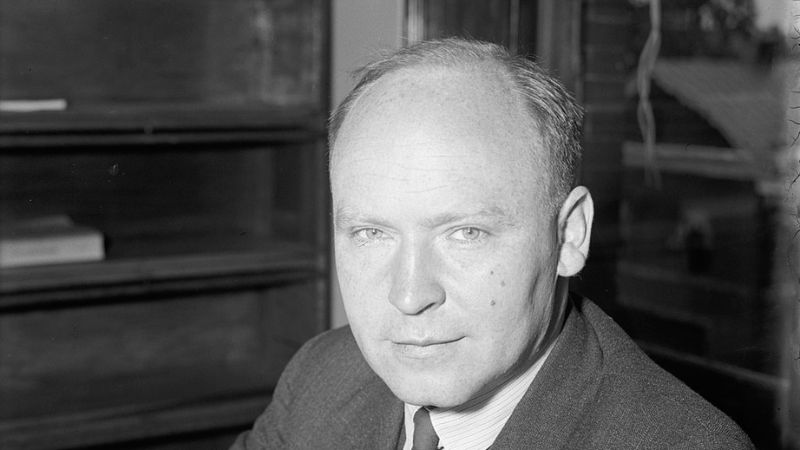 Rossby waves play a significant role in shaping weather and climate. Resulting from the rotation and geography of Earth, Rossby waves transfer heat back and forth between the equator and the poles in an attempt to return atmosphere to balance. The relatively slow motion of these waves often results in fairly long, persistent weather patterns. Rossby waves are known as longwaves which cause ridges and troughs which dictate big weather patterns around the planet.

--> Though a topic for another time, there are also shortwaves. These are little “disturbances” within longwaves that have less to do with weather patterns, but can still cause changing weather.

Rossby waves form because of terrain changes and differing temperatures around the planet. In both cases, air flow is disrupted creating imbalances in temperature across the surface and into the atmosphere. Winds respond to the changes in speed and direction—a sign of Earth seeking to regain temperature balance. 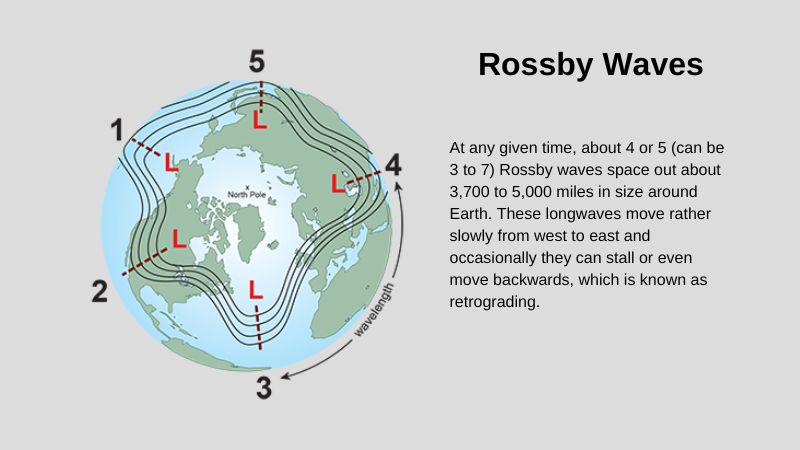 At any given time, about 4 or 5 (can be 3 to 7) Rossby waves space out about 3,700 to 5,000 miles in size around Earth. These longwaves move rather slowly from west to east and occasionally they can stall or even move backwards, which is known as retrograding. This large size and slow movement is why locations between the trough and ridge in the wave can experience long periods of cool, unsettled weather while areas under the ridge can remain warmer and drier.

So, you might be able to guess what part of the longwave has been over top of the Capital Area in early December. If you were thinking ridge, you are correct. An upper level ridge has caused persistent above average, and at times record setting, temperatures through the first week of the month. You might recall, November began with 11 days above average, followed by 12 days below average. The latest warm stretch began on December 2 and will last through December 14, a period of about 13 days. Should the subsequent cool spell last for a similar length of time, it could stick around for Christmas. 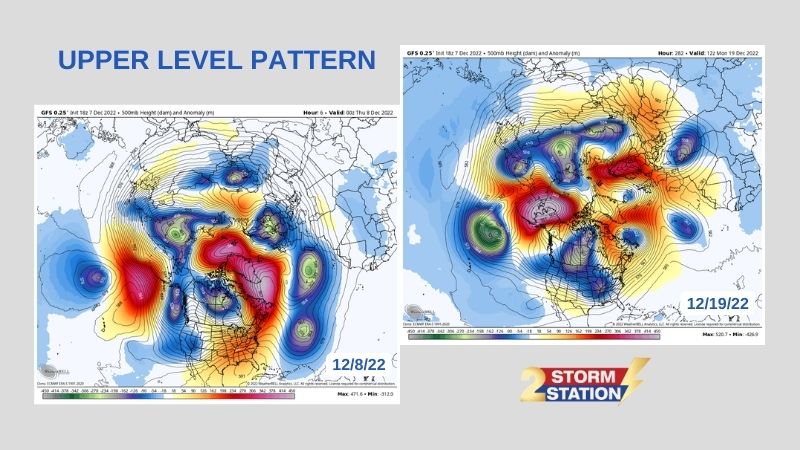 Forecast model guidance does show the ridge dominant in early December breaking away and being replaced by a trough toward the middle of the month. Temperatures are expected to dip below average following a strong cold front that will move across the United States between December 12 to 16. With a ridge developing near Alaska and another one weakening over the Gulf of Mexico, cooler air should continue to funnel into the Lower 48 during the second and third weeks of December. 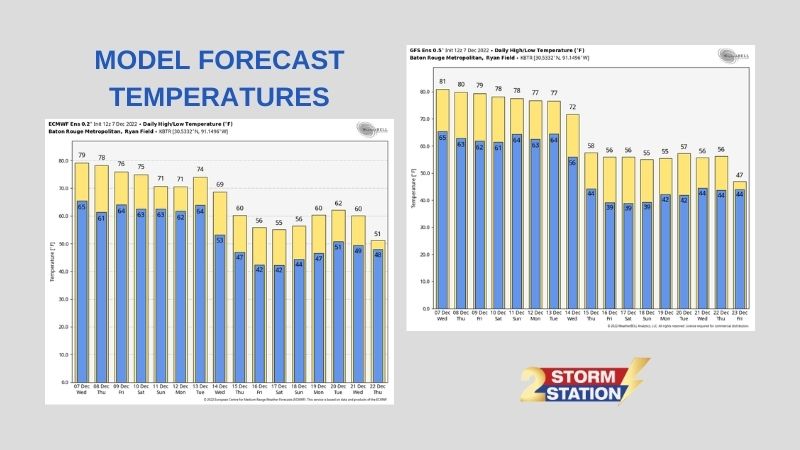 The means of several runs of models from both the American (GFS) and European (ECMWF) indicate a sharp drop in temperatures for the Baton Rouge Area around December 14. Both suggest temperatures below seasonal averages of highs in the mid 60s and lows in the mid 40s through the end of their forecast period on December 23. Keep in mind, the farther out in time those models go, the less reliable the information. However, agreement from both provides a better level of confidence in the trend.

As we move toward the holiday season, follow your weather with The Storm Station. WBRZ Weather is here for you, on every platform. Catch the latest updates can be found on News 2, wbrz.com, and the WBRZ WX App on your Apple or Android device. You can also follow WBRZ Weather on Facebook and Twitter for even more weather updates while you are on the go. Happy Holidays!