Cloudy and cooler day ahead, less action for the fourth

A storm system will move over Louisiana and Mississippi on Tuesday leading to a wetter and cooler day. That system will make it to Texas early Wednesday, but will leave moisture in its wake for continued rain chances through the week. Showers and thunderstorms held off a little longer than expected on Monday; however, the rain coverage forecast was very accurate. 60 percent of the forecast area received rain and most remained east of the Mississippi River. 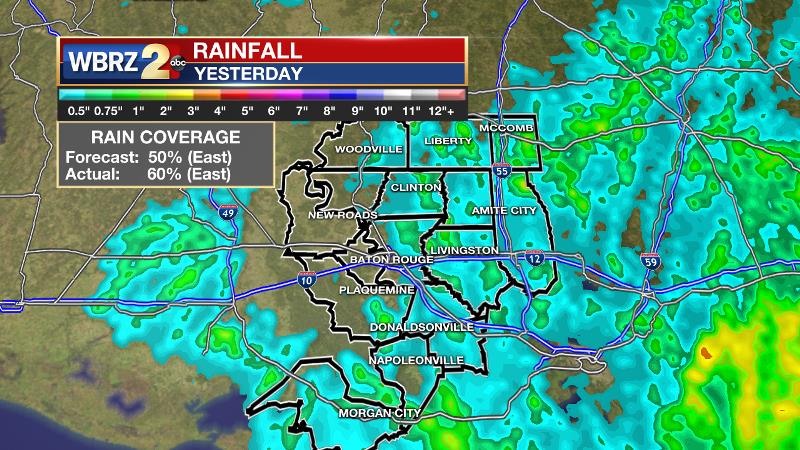 Today and Tonight: Widespread rain and thunderstorms can be expected for Tuesday. A constant rain is not expected and there will be breaks in the activity. Overall, the rain threat looks less impressive than it did yesterday. Generally, one inch is anticipated with locally higher amounts. Where the pockets of heaviest rain become established, a few inches could fall leading to nuisance flooding. Advisories or warnings may be issued where this occurs. Due to clouds and showers, temperatures will be limited to the low 80s. Showers and thunderstorms will taper overnight with lows in the low 70s.

Up Next: As the storm system moves west, showers and thunderstorms will decrease in coverage but still remain scattered for the latter half of the week. Independence Day will be warm with afternoon rumblers but showers and storms should begin to ease off during the early evening hours. Should things timeout as expected, drier conditions can be anticipated just in time for WBRZ’s Fireworks on the Mississippi. Of course, it will stay warm and muggy out there with temperatures in the low 80s. Scattered showers and thunderstorms will stay in the forecast for Thursday and perhaps Friday. Total rainfall amounts through the week could reach 1-3 inches in areas that receive the most action. 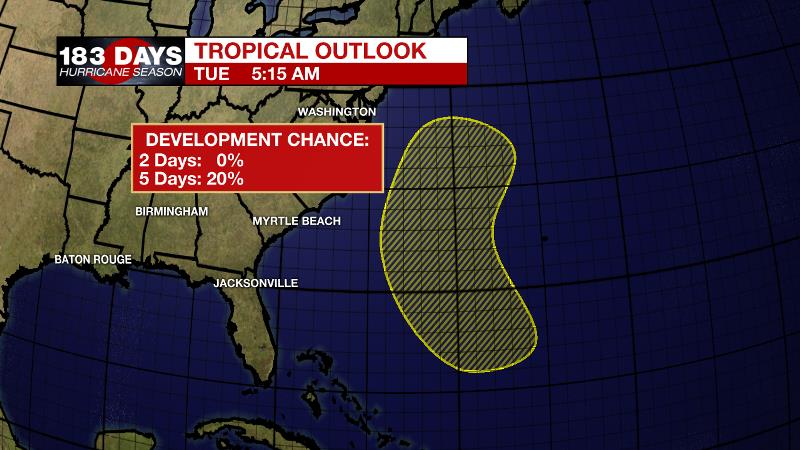 The Tropics: A westward moving area of low pressure several hundred miles east of Florida is producing some shower activity. Conditions will be unfavorable for development over the next few days but by the weekend, another non-tropical low pressure system may form between Bermuda and the eastern U.S. and gradually acquire some tropical characteristics. The National Hurricane Center assigns this area a 20 percent chance of development over the next 5 days as it lifts northeast away from the United States. 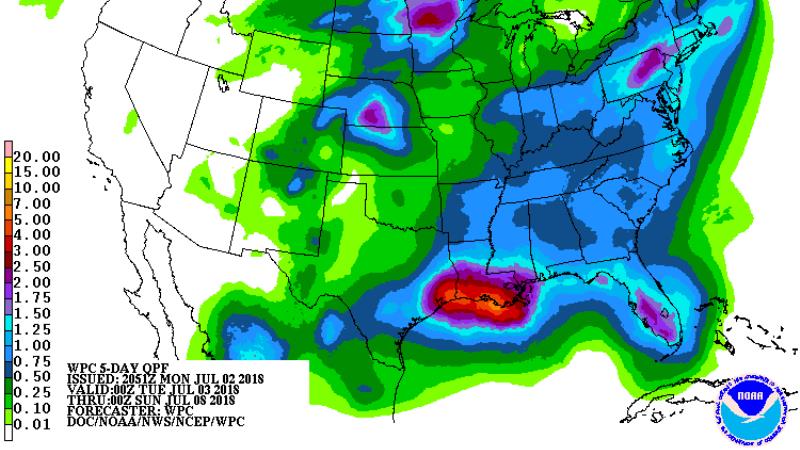 An upper level trough and associated area of surface low pressure near the central Gulf Coast will be the main weather maker this week. Centered over southeast Louisiana, these features will move westward to east Texas by Wednesday. Available moisture in the atmosphere will be near record levels on Tuesday afternoon and then drop back to average on Wednesday. For this reason, Tuesday is expected to be the most active day and any thunderstorms will be capable of leaving behind a couple of inches of rain. Some nuisance flooding issues could result. In addition to that, frequent lightning and gusty wind will also be possible. After the widespread showers and thunderstorms pull away to the west on Wednesday, scattered showers and thunderstorms will remain but the heavy rain threat will diminish. Another, weaker inverted trough will move across the Gulf Coast on Thursday, possibly necessitating increased rain coverage in the forecast once again. All told an additional 1-3 inches of rain is indicated by the Weather Prediction Center through Friday.  Forecast models diverge on the weekend weather with a third inverted trough shown, but on different days. Time should iron out these details and help determine rain coverage with more confidence.