Some slow changes will come into local weather over the next few days as the pleasant fall weather abates. Unfortunately, we have to look at the tropics yet again.

The Next 24 Hours: One more night in the 40s is ahead. A few clouds may sneak into skies. Those high clouds will stream over the area on Thursday and lead to some muted sunshine. High temperatures will get into the mid 70s, similar to Wednesday.

After That: Similar conditions are expected on Friday before some slight adjustments heading into the weekend. Persistent easterly winds will gradually move temperatures back above average. Enough moisture may come into the atmosphere that a weak disturbance could spark a few showers on Saturday. The day does not look like a washout but kind of gloomy and that will hold highs in the low 70s. This is probably the best chance and Sunday through Tuesday should bring partly cloudy skies and above average temperatures with highs in the low 80s and lows in the upper 60s. By the middle of next week, we will be watching Eta in the Eastern Gulf of Mexico. CLICK HERE to view your complete 7-Day Forecast. 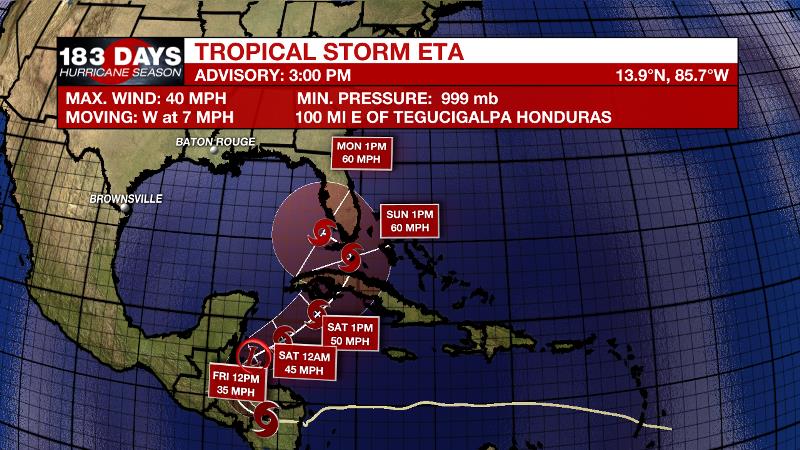 The Tropics: Eta is expected to weaken to a tropical depression over Honduras. Over the next few days, it will emerge in the northwestern Caribbean Sea and move near south Florida by early next week. There are now indications that it will then hook west into the Gulf. Upper level steering winds should hold it east of the local area but since this is many days away, uncertainty remains high.

The Explanation: Thanks to an advancing upper level trough of low pressure, some high clouds will be around on Thursday. While moisture will not be deep enough for precipitation, a steady increase in moisture will be underway and therefore conditions will change by the weekend. A portion of the upper level trough may cut off and slow over the local area providing enough instability for a few showers—especially Saturday. That upper level low is expected to be absorbed by the remnants of Tropical Storm Eta over the Florida Straits by the end of the weekend. Forecast models struggle on exactly how to handle Eta but the two major ones have the idea in play that this system will be in the Eastern Gulf early next week. While it is too early for certainties, we expect a lot of dry air over the western two-thirds of the Gulf and strong southwesterly winds both of which *should* keep the systems effects east of Louisiana. But we no better than to count on anything in 2020.