Clear skies in the morning, showers and storms in the afternoon

The rain starts this afternoon.

Today and Tonight: The morning hours today will start dry before scattered showers move through the area this afternoon. Everyone from Mississippi down to the coast can expect to see a shower or two today. Showers and storms will linger into the evening hours and die out overnight. High temperatures will be near 91 in the sunny spots and areas that see more rain will be in the mid to upper 80s. Overnight lows will be near 74 degrees.

Up Next: The rain is here to stay. Deep tropical moisture will be funneled into the Gulf of Mexico by a tropical wave. Each day will start with several hours of dry time. The heat and energy from the sun will help promote shower and storm activity every afternoon for the next 7 days. Some areas will likely see heavy rain a few days in a row. Street and poor drainage flooding will be a possibility and become more likely toward the middle of next week. High temperatures will be in the very low 90s and upper 80s.

We are monitoring the tropics closely. A wave just to the east of Florida is expected to enter the Gulf of Mexico and has a medium chance of formation. Several surface boundaries expected to move through south Louisiana suggest that the bulk of heavy rain will be east of Louisiana. The forecast is subject to change. Stay will the WBRZ weather team and we will bring you updates as soon as we have them.

Tropical Storms Paulette and Rene are still active in the open Atlantic and a new tropical depression is expected to form in the next few days off the western coast of Africa. Read more below. 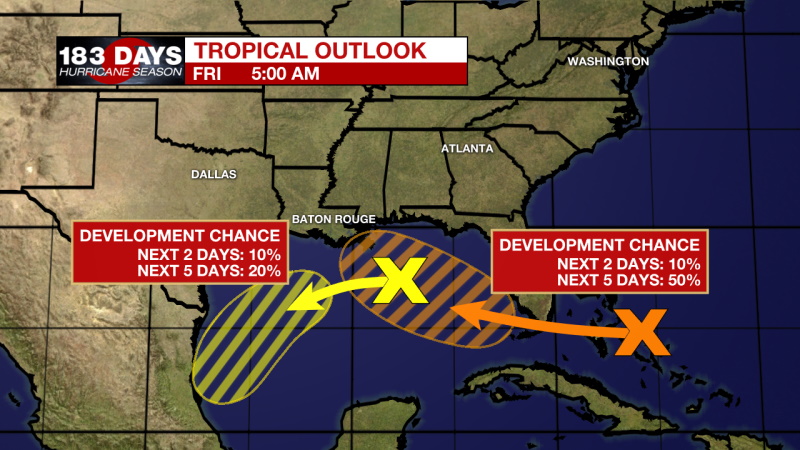 At 500 AM AST (0900 UTC), the center of Tropical Storm Paulette was located near latitude 23.1 North, longitude 51.7 West. Paulette is moving toward the west-northwest near 10 mph (17 km/h). A motion toward the northwest is expected for the next few days. On the forecast track, the center of Paulette should approach Bermuda Sunday night and Monday. Maximum sustained winds are near 65 mph (100 km/h) with higher gusts. Little change in strength is expected today. Gradual strengthening is expected to begin tonight or on Saturday, and Paulette is forecast to become a hurricane this weekend. Tropical-storm-force winds extend outward up to 205 miles (335 km) from the center.

At 500 AM AST (0900 UTC), the center of Tropical Storm Rene was located near latitude 19.7 North, longitude 38.5 West. Rene is moving toward the west-northwest near 10 mph (17 km/h). This general motion is expected to continue through Friday night, followed by a turn toward the northwest on Saturday. A north-northwestward and northward motion with a decrease in forward speed is forecast Sunday and Sunday night. Maximum sustained winds are near 45 mph (75 km/h) with higher gusts. Gradual strengthening is forecast during the next couple of days. Afterward, weakening is expected to begin by Sunday night. Tropical-storm-force winds extend outward up to 70 miles (110 km) from the center. The estimated minimum central pressure is 1002 mb (29.59 inches). 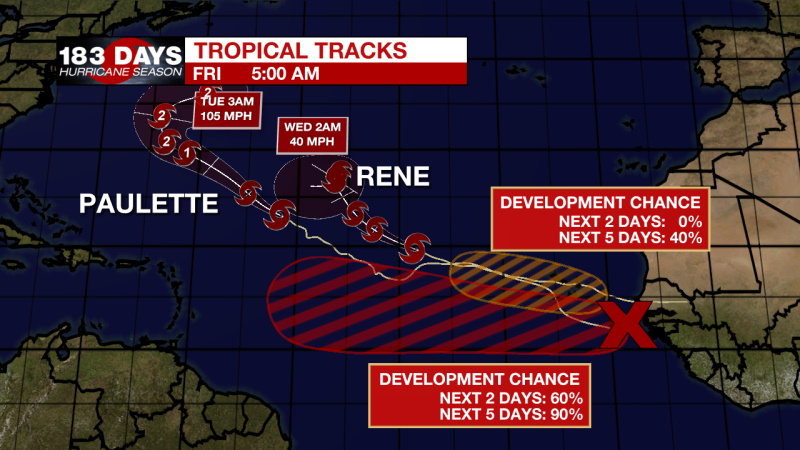 A large area of disorganized showers and thunderstorms extending from near the Central and Northwest Bahamas eastward over the western Atlantic for a few hundred miles is associated with a surface trough of low pressure. This system is forecast to move westward, crossing the Bahamas and Florida later today and moving into the eastern Gulf of Mexico over the weekend. Upper-level winds are expected to become conducive for development, and a tropical depression could form while this system moves slowly west-northwestward over the eastern Gulf of Mexico early next week. Regardless of development, this system is expected to produce locally heavy rainfall over portions of South Florida and the Keys during the next couple of days.

Another trough of low pressure is located over the north-central Gulf of Mexico. Although the associated shower and thunderstorm activity is currently minimal, some slow development of this system is possible while it moves westward and then southwestward over the northern and western Gulf of Mexico through early next week.

A tropical wave is located a few hundred miles south-southeast of the Cabo Verde Islands and is producing a large area of disorganized showers and thunderstorms. Gradual development of this system is forecast, and a tropical depression is expected to form within the next few days while the system moves generally westward across the eastern and central tropical Atlantic.

Another tropical wave is forecast to emerge off the west coast of Africa this weekend. Environmental conditions are expected to be conducive for development, and a tropical depression could form over the far eastern tropical Atlantic early next week while the system moves slowly westward.