Tonight and Tomorrow: A line of storms moving through the area will leave lingering light showers in its wake through this evening. Drier conditions will be the case as we approach midnight, but pockets of drizzle will also linger in the area. Clouds will break up slightly overnight, as temperatures drop near 71° with light winds out of the east. Another cloudy morning in store for your Monday, as scattered showers and isolated storms develop through the afternoon. Showers will be moving from southeast to northwest between 1 PM and 7 PM, with stronger storms possible between 3 PM and 6 PM. Moisture will dry up faster into the evening, as a mid-level ridge begins to build into Tuesday. Temperatures will be reaching into the 80s by 10 AM, on their way to a high of 88°. 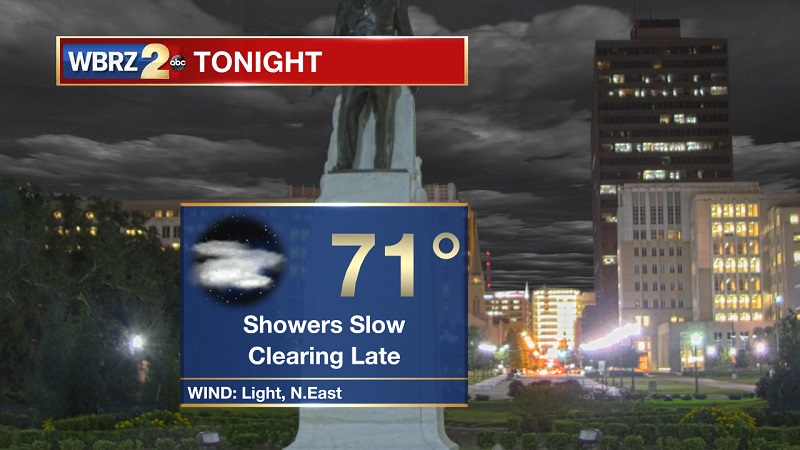 Up Next:  A changing weather pattern early in the week will bring less rainfall, but increased temperatures and dew points through much of the week. Temperatures will hover around 90°, but will drop slightly into the upper 80s as we approach the weekend.

The only named storm or tropical wave currently in the Atlantic, is Tropical Storm Leslie. She is currently located about 650 miles east of Bermuda, with sustained winds of 50 mph, and moving west-southwest at 6 mph. A slow southwestward motion is forecast during the next few days. Some gradual strengthening is also forecast during the next 72 hours, as Leslie is likely to gain category 1 hurricane status on Wednesday. She is expected to decrease intensity back to tropical storm status by Friday, as she meanders toward the northwest. 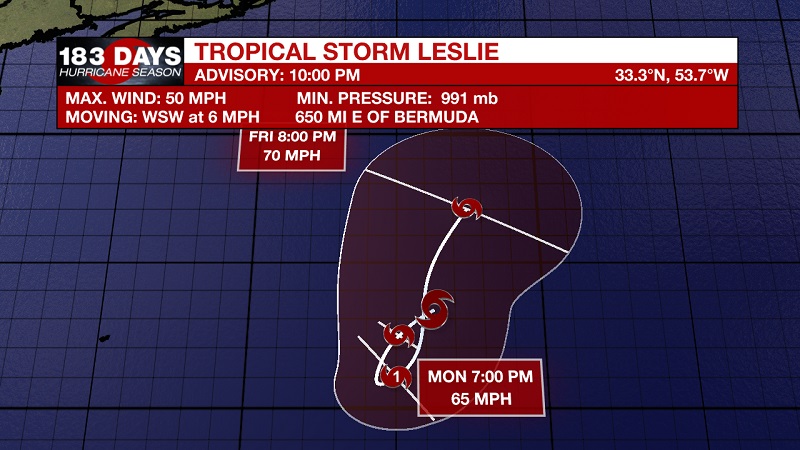 The stalled front camping just offshore is begin to wane and break up tonight and into tomorrow. We will not yet feel these affects until late Monday and early Tuesday, as an upper level high pressure in the Gulf is continuing to push moisture onshore from the southeast. A surface high pressure and mid-level ridge will build Tuesday, helping to drop afternoon rain chances and bring more sinking air and blue skies through the area during much of the week. The trade-off will be warming temperatures, as highs will be about 5 degrees above average and hover around 90° through Thursday. This ridge begins to travel east late in the week, increasing rain chances, but allowing for temperatures to drop and approach our average of 85°. *Cold Front Watch* Continuing to monitor long-range models for the first intact cold front of the season to reach the Gulf. A strong and persistent east Gulf high keeps breaking incoming fronts until the middle of October. The American (GFS) model is now forecasting a front to break through between the second and third week of October. Right now, the day is October 15th, but it is likely to change as we proceed through the beginning part of the month - So stay tuned.