Over the weekend, pop entertainer Britney Spears publicly expressed her feelings regarding her social media critics, her father, and even her younger sister via several Instagram posts, which went on to receive widespread support from fellow celebrities.

On Friday, the Princess of Pop posted: “There’s nothing worse than when the people closest to you who never showed up for you post things in regard to your situation whatever it may be and speak righteously for support."

This was followed by a more detailed post, in which Spears specifically named her younger sister, Jamie Lynn, as participating in a performance that Spears said 'hurt her deeply.'

Glamour, Yahoo, and other media outlets suspect Spears was referring to her sister's tribute performance during the 2017 Radio Disney Music Awards.

In any case, the 39-year-old singer said of her 30-year-old sibling, “I don't like that my sister showed up at an awards show and performed MY SONGS to remixes. My so-called support system hurt me deeply!!!!”

Spears' honesty didn't end with this.

She went on to mention the conservatorship, which has placed her under her father's authority for the past 13 years, saying it, "killed my dreams."

"All I have is hope and hope is the only thing in this world that is very hard to kill, yet people still try," wrote Spears. "I didn't like the way the documentaries bring up humiliating moments from the past... I'm way past all that and have been for a long time."

Spears went on to call out one or more unnamed individuals who she said weren't there for her over the years.

Several media outlets point out that many fans assume Spears was referring to her younger sister.

In the post, she said, “There’s nothing worse than when the people closest to you who never showed up for you post things in regard to your situation whatever it may be and speak righteously for support. There’s nothing worse than that. How dare the people you love the most say anything at all… did they even put a hand out to even lift me up at the TIME !!!??? How dare you make it public that NOW you CARE… did you put your hand out when I was drowning ????”

The lengthy caption came alongside a quote that read “Never forget who ignored you when you needed them and who helped you before you even had to ask."

On Saturday, Spears wrote a lengthy post in response to critics who apparently felt she should be performing in Las Vegas instead of dancing in clips that she's been uploading to social media.

She posted, "For those of you who choose to criticize my dancing videos... look I'm not gonna be performing on any stages anytime soon with my dad handling what I wear, say, do or think. I've done that for the past 13 years... I'd much rather share videos YES from my living room instead of onstage in Vegas. I'm not gonna put on heavy makeup and try try try on stage again and not be able to do the real deal with remixes of my songs for years and begging to put my new music in my show for MY fans. So I quit !!!!"

Actress Selma Blair wrote, "Perfectly said... I love you. And this. I love watching you on your terms."

Rosie O'Donnell also sid "I'm so proud of u for speaking up for urself — I love you."

"I'm with you darlin' I'll build the Legos," said singer Pink, in reference to Spears' Instagram photo that advised her critics to go, "step on Legos." 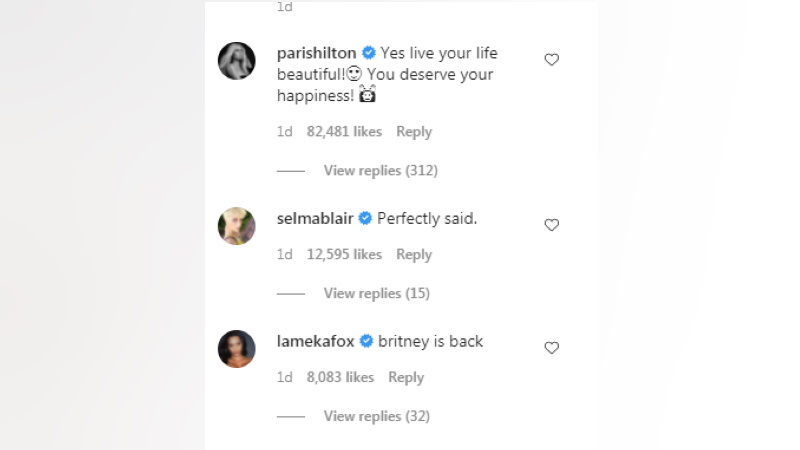 Interestingly, Spears' post appeared hours after her younger sister took to social media to announce that she is “stable” after her sister's allegations that her family and friends were only vocalizing their support to save face.

Click here for more on Spear's struggle to free herself from a conservatorship that she alleges has crippled her freedom and ability to enjoy life.