According to WWL-TV, the man stole the vehicle shortly after he was arrested, near a Pilot Gas Station on Airline Highway, around 5 a.m.

It all unfolded when deputies were sent to the gas station to check out a suspicious car.

Deputies say they discovered a man in the vehicle who appeared to be shooting up a substance that may have been heroin.

Authorities say when they tried to catch the man he drove away and crashed into a ditch where they were able to arrest him.

But once he was handcuffed and put into a patrol vehicle, deputies say the man somehow got behind the wheel of the patrol vehicle and drove away.

The ensuing chase became chaotic as deputies followed the suspect in their vehicles and one of the lawmen accidentally crashed into another vehicle near David Drive. 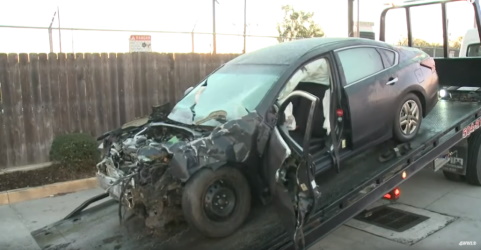 Louisiana State Police (LSP) are leading an investigation into this accident, and LSP spokesman, Monroe Dillion, told WWL-TV, "The other vehicle which was a black sedan, it was occupied by two to three occupants. Those occupants were transported to the hospital with minor injuries."

After the accident, deputies lost sight of the stolen police cruiser.

But only a few hours later, they were able to locate it in the 700 block of Toledano.

Authorities viewed footage from nearby security cameras and watched the man get out of the stolen SUV shortly after 6 a.m. and appear to wipe away his fingerprints before fleeing in the direction of a Walmart on Tchoupitoulas Street.

Investigators are asking anyone with information regarding this suspect to contact Detective Kevin Tennison with the St. Charles Parish Sheriff's Office at (985) 783-1135 or (985) 783-6807.