Well above average temperatures are expected for the remainder of the week with minimal rain shower activity. Hurricane Dorian continues a slow scrape northward along the Southeast U.S. Coast.

Today and Tonight: Mainly sunny skies will allow thermometers to shoot into the low 90s by midday. Expect a top out temperature near 95 degrees around 3pm. Winds will be light and northeasterly. Overnight, skies will stay clear with lows in the mid 70s.

Up Next: Dry and sunny conditions are expected for the rest of the week. This weather will be associated with a large upper level ridge of high pressure that will build across the Lower Midwest. This ridge's timing is perfect for us, protecting the Gulf Coast from Hurricane Dorian. The ridge will stay around through the remainder of the week into Saturday. Winds will be staying out of the north, which also means dry air. This dry air will help to keep dewpoints in the upper 60s to low 70s, but will also allow high temperatures to soar into the mid-to-upper 90s through Friday. One or two stations flirting with 100 degrees is possible. 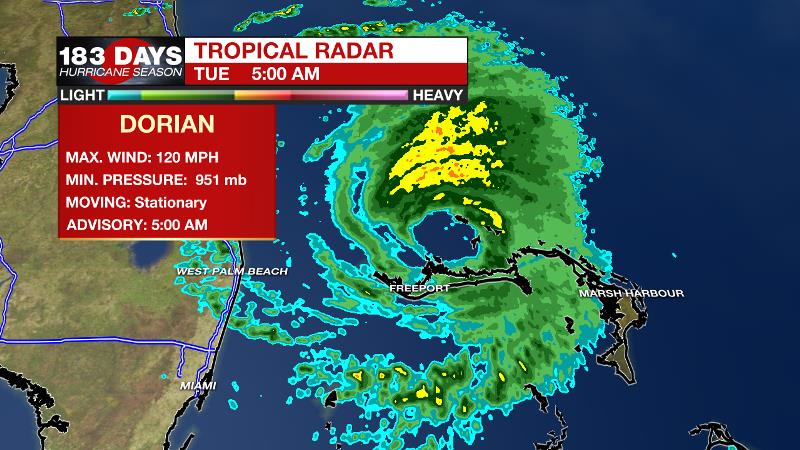 The Tropics: As of 5am Tuesday, Dorian had barely moved north from its position on Monday morning, located 40 miles north of Freeport in the Bahamas. Maximum sustained winds were at 120 with a minimum central pressure of 952mb. A gradual northwest motion is anticipated to begin on Tuesday. On the current forecast track, hurricane conditions will be very close to the coasts of Florida, Georgia and South Carolina but could remain just offshore. A storm surge of up to 7 feet is possible on portions of the north Florida coast with rain amounts of 3-6 inches in coastal communities from Florida north to North Carolina. Tropical Storm winds are possible there as well and a slight jog to the west by Dorian could result in much higher winds. 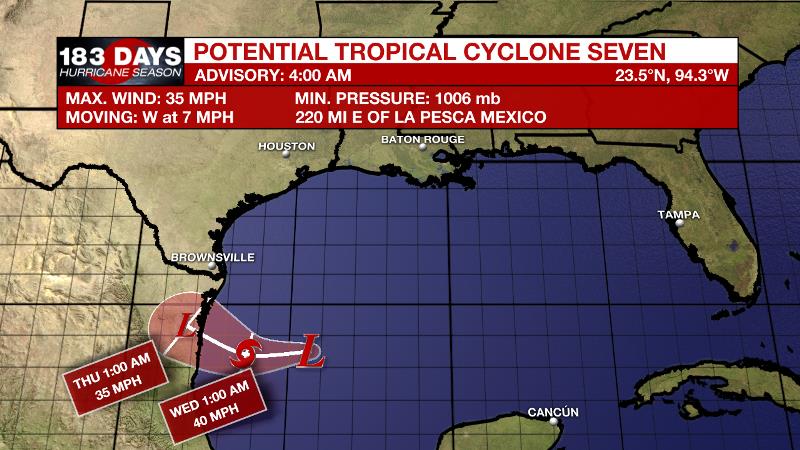 In the southern Gulf of Mexico, Potential Tropical Cyclone has been deemed by the National Hurricane Center. That term was created in recent years to advise coastal residents that a tropical storm will form, so preparations can begin. In this case, the storm will be named Fernand and be short-lived. Winds will top out around 45mph before the storm drift westward into Mexico and causes heavy rain. As we near the climatological peak of hurricane season, the Atlantic Basin is characteristically busy with several other areas being monitored for development. A wave in the central Atlantic, south of Bermuda has a low chance of development as it drifts northward. A second wave near the Cabo Verde Islands is also likely to become a tropical storm by the middle of the week on a track northwestward into the central Atlantic. Lastly, the next wave coming off the African Coast ha sa medium chance of formation as well. For the latest on the tropics, check in with wbrz.com/weather, WBRZ Weather on Facebook and Twitter.

A strong ridge of high pressure between Hurricane Dorian and a developing tropical system in the southern Gulf will maintain dry, hot conditions through the end of the week. Hurricane Dorian is positioned on the western side of another upper level ridge of high pressure over Bermuda. The relatively lower pressure found between these two systems will allow short wave trough of low pressure to dip out of Canada and scoop Dorian northward.  Therefore, locally, heat will build and feels-like temperatures will be in the 108-110 range Wednesday into the weekend. Heat advisories may be issued by the National Weather Service. A backdoor cold front induced by Hurricane Dorian may stir up a shower or two on Friday, but other than that, rain chances are quite low. That front will fall apart over the weekend and hot temperatures will continue.