As warmer temps return, so will showers and thunderstorms

Milder air will begin to infiltrate the region Wednesday afternoon. A few storm systems will need to be monitored through early next week.

Today and Tonight: Surface high pressure sliding across the area will maintain mostly clear skies for one more day as a moderating temperature trend begins. Expect highs in the low to mid 60s with light, east winds. Overnight, those winds will shift southeasterly and lows will be considerably warmer, likely stopping in the low 50s. Skies will be mostly cloudy with some fog possible late.

Up Next: With a warmer starting point and continued southeasterly winds, Thursday afternoon temperatures will climb into the 70s ahead of a frontal system. Skies will be mostly cloudy with spotty showers possible. That frontal system will cause mild air and moisture to pool across the central Gulf Coast Friday and into Saturday, and this will be sufficient to churn up showers and thunderstorms. While the greatest threat for severe weather will likely stay north of the local area, parameters could still be in place for some action locally, so stay in touch with the forecast. Another strong storm system is likely to follow on Monday.

While a warming trend is found on the @WBRZweather 7-Day forecast, model guidance points to another cool down just beyond. A few storm systems will affect the area before that, here is more: https://t.co/tQC5lrBodV pic.twitter.com/5Hy0ah81B1

Thanks to a surface high pushing east through Mississippi, the area will remain calm and mostly clear on Wednesday with high temperatures moderating into the low 60s. Thursday through late week, the aforementioned surface high continues east, allowing steady on-shore return flow to develop. Resulting moisture will keep overnight lows much warmer and allow some advection fog to develop. Into Thursday, the increased low-level warm, moist air will help to develop spotty showers across the region. The general environment will continue through Friday, as the next storm system begins to develop across the Western Plains. During the late Friday into Saturday morning period, forecast model guidance shows a negatively tilted trough moving across the Mid-Mississippi River Valley, which would create a strong surface low pressure over Missouri or Arkansas. At this time, the position of the surface low well north of the local area would mean more favorable wind profiles for severe weather are likely to remain north as well. Of course, it is too early to lay out specific details and a risk for strong to severe thunderstorms still exists, especially if the low tracks farther south or activity sparks a bit sooner while the upper levels are more favorable. 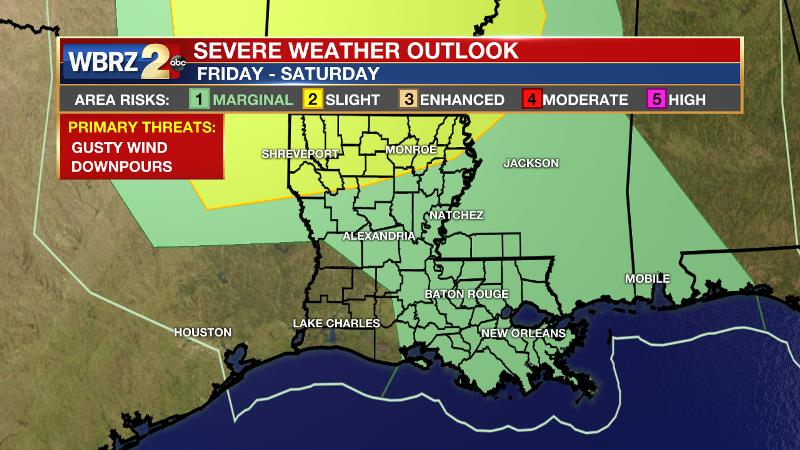 Currently, the Storm Prediction Center highlights the greatest chance for severe weather just north of the Baton Rouge area. However, the entire local area has been placed in a 1/5 “marginal risk” for severe weather, telling us that one or two storms could be strong with damaging winds being the main threat. After this system, there will be a brief break prior to another trough and surface low cutting across the Mid-South. The latest model guidance moves this system a little farther south, which could heighten the possibility of severe weather on that second one early next week.