As expected, Gordon impact much lower on west side

There are no longer any alerts in effect related to Tropical Storm Gordon. The WBRZ Weather Team expected lower impacts from the storm across the Baton Rouge area, with scattered showers and a bit of breeze, at most. If anything, impacts have been even less than that.

Though bands of rain are beginning to wrap around the center, much of #Gordon's "punch" is on the eastern side and should remain this way through landfall. pic.twitter.com/xbDSgzJEXo

So suffice it to say Louisiana “dodged the bullet” as flash flooding and surge occurred in Florida, Alabama and Mississippi. Sadly, even one death was reported near Pensacola. Approximately 50 percent of the 13 Parish, 3 County forecast area received rain on Tuesday, pretty close to the forecast. Amounts were not overly impressive with only a few spots going over an inch. 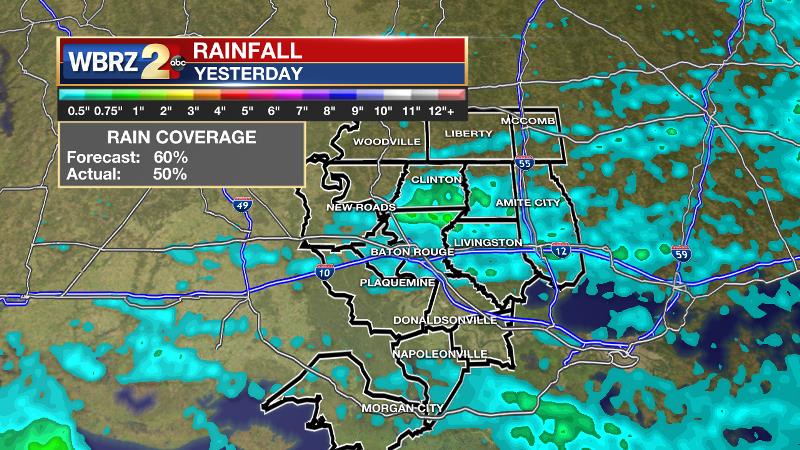 The Tropics: Tropical Storm Gordon made landfall around 10:15pm just west of the Alabama-Mississippi border with estimated maximum sustained winds of 70 mph. The storm will continue to pull away to the northwest at 15mph, eventually slowing down as it weakens into a tropical depression through Wednesday. Feeder bands on the eastern side of the storm will continue to produce heavy rainfall over parts of Florida, Alabama and Mississippi. By Thursday, a feed of moisture from the Gulf to Gordon’s remnants in Arkansas may help to activate scattered showers and thunderstorms across the local area. Elsewhere, Hurricane Florence has become quite powerful in the central Atlantic with 105mph maximum winds and it is moving northwest into warmer water. Bermuda and the eastern United States will need to keep an eye on this storm. Finally, another wave just off the African Coast is likely to become Tropical Storm Helene within the next week as we near the typical peak of hurricane season.

Today and Tonight: Wednesday will be mostly cloudy with just a few showers around. Actually, it is looking far less active for today than previously thought. Highs will reach the upper 80s. Winds will be southwest at 5mph. Nighttime lows will be in the low 70s with mostly cloudy skies and a stray shower or two. 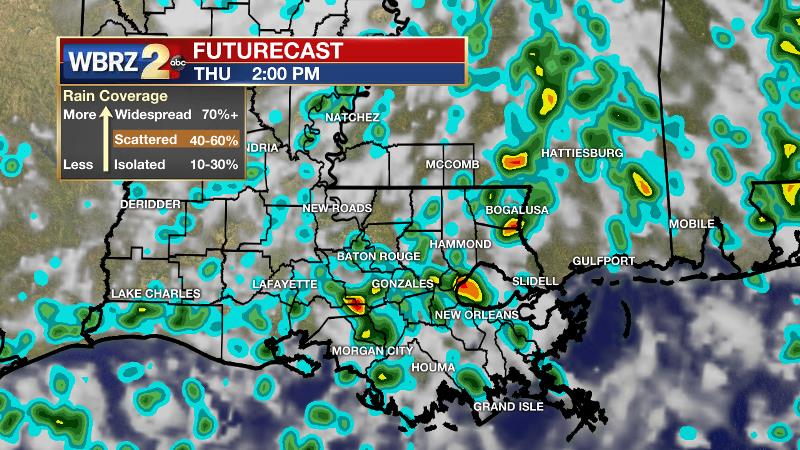 Up Next: Thursday and Friday should be a bit more active. Daytime heating, marine breezes and lingering tropical moisture in the atmosphere from Gordon will all work to produce scattered showers and thunderstorms. Highs will be in the upper 80s with lows in the low 70s. Over the weekend, there should be a tick down in rain coverage with only isolated afternoon showers. Therefore, highs will go a little warmer into the low 90s. A front may approach the area next week but will stall and maintain high rain chances rather than change temps. 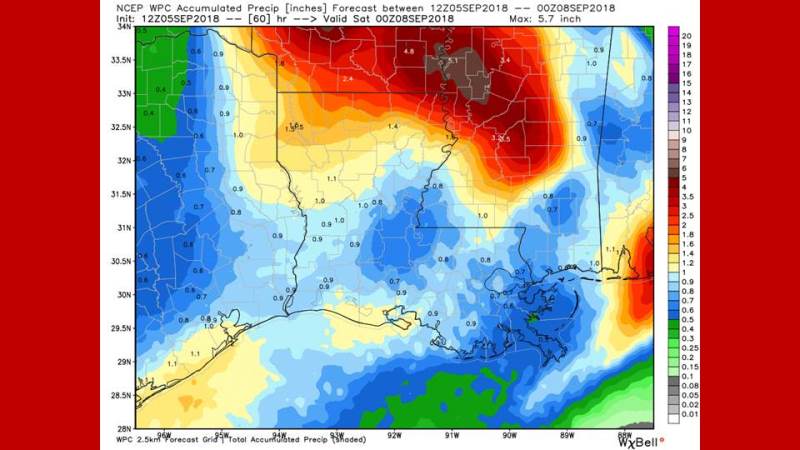 Water vapor imagery distinctly shows dry air wrapping into the center of Tropical Storm Gordon, which will lead to the continued decay of the system. Since that dry air entrainment is occurring through our area, rain coverage should be limited and the forecast has been adjusted drier to account for that. Feeder bands producing tropical downpours and flooding over Florida and Alabama should trend westward with Gordon as the remnants push into Arkansas. The feeder bands will slowly become less organized and eventually detach from the storm but may have just enough organization to enhance rainfall in the local area on Thursday. Still, rain should not be heavy or persistent enough to warrant any bulletins and the flash flood watch was canceled by the National Weather Service. An additional inch or so is possible. Once Gordon runs its course, the weather pattern will transition back to regular onshore flow with marine breezes triggering scattered showers and thunderstorms each day. An elongated frontal zone will settle into the Lower Mississippi Valley early next week but is not likely to reach the local area with any temperature changes. However, it could serve as a better focus for enhanced rainfall next week.