A pair of fronts set to reinforce fall conditions

Reaching 50 degrees on Wednesday morning marked the lowest temperature since April 17 when Metro Airport thermometers settled at 49 degrees. While that will likely be the coolest reading of the 7-Day Forecast, below average temperatures will continue.

The Next 24 Hours: Skies will stay clear tonight with slightly milder low temperatures in the mid 50s. Winds will turn westerly ahead of an approaching weak cold front on Thursday. Note that the atmosphere will remain very dry and therefore little more than a few clouds may develop. It is common for temperatures to spike just ahead of a cold front and therefore we expect readings a little higher than the last few days reaching the mid 80s.

After That: The frontal passage will restore highs and lows in the 70s and 50s respectively right through the weekend. Another front will pass Sunday night to keep the fall feel going. Beyond that, a gradual warming trend will begin and the long-term outlook suggests we will end up back above average by the middle of next week. There is no significant chance for rain through the 7-Day Forecast. 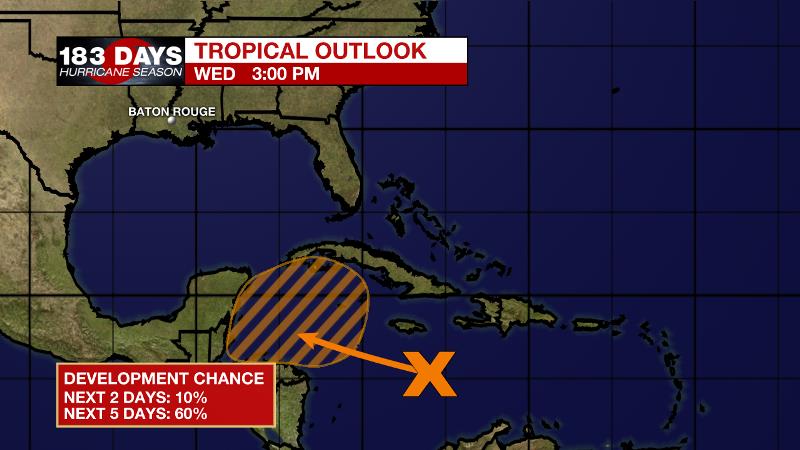 The Tropics: A tropical wave located over the west-central Caribbean Sea is expected to move westward over the next couple of days, and produce a broad area of low pressure over the western Caribbean Sea by Friday. Environmental conditions are then forecast to be conducive for some development and there is a 60 percent chance that a tropical depression forms late this week or this weekend.

?? #October does not mean that hurricane season is over. Just two years ago, Hurricane Michael devastated Mexico Beach, Florida on the 10th. @DrJoshWX has Louisiana's late season storm history. pic.twitter.com/qtgdR7ObMM

The Explanation: On Thursday, a broad trough will remain over the Eastern U.S. and another axis will cross the local area in conjunction with a reinforcing front at the surface. A few cirrus clouds may pass but there will not be enough moisture for any precipitation. Well below average temperatures and sunshine will set up for the weekend. Yet another perturbation will pivot through the Eastern U.S. trough on Sunday resulting in a third, reinforcing frontal passage. Around this time, a tropical depression may be developing near the Yucatan Peninsula in the western Caribbean. A deep moisture feed will be funneled north ahead of yet another cold front Sunday. However, a strong upper level ridge of high pressure to the west will cut off the southern end of the front and cause any showers along the front to diminish. That ridge will advance further east, over the local area by the middle of next week, which should keep any tropical activity away from the local area. Additionally, the ridge will cause gradual warming with above average temperatures and dry conditions from the middle to end of next week. Any fall flowers or healthy lawns will need watered.