Baton Rouge area weather has gone from a hot streak to a wet period to a taste of lower humidity. The latter is unusual for early April but a reality for the next 36 hours!

Next 24 Hours: It may not feel like August overnight. Beneath mostly clear skies and with light north winds, low temperatures will sneak into the upper 60s along and north of I-12. This will be made possible by the dew point temperatures dropping into the low 60s. Thursday morning will feel quite comfortable for the time of year. Even with plenty of sunshine and high temperatures reaching the low 90s by early afternoon, unseasonably low humidity will make for a pleasant summer day.

Up Next: Even Friday morning could start off on the cool side of average in the low 70s. A partly sunny day is ahead and as some moisture returns to the air, spotty afternoon showers and thunderstorms could pop. Standard summer fare is ahead Saturday into early next week. Expect hot and humid conditions with highs in the low 90s and lows in the mid 70s. While each day will start with plenty of sunshine, isolated showers and thunderstorms will be around to dodge in the afternoons. CLICK HERE for your full 7-Day Forecast. 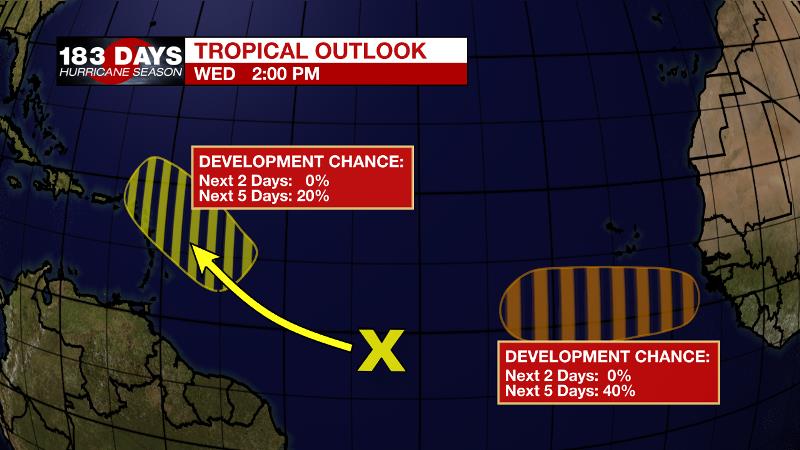 The Tropics: A tropical wave located over the central tropical Atlantic is producing a broad area of disorganized showers and thunderstorms. Environmental conditions east of the Lesser Antilles allow a 20 percent chance of development by early next week while the disturbance moves west-northwestward at 10 to 15 mph.

Another tropical wave is forecast to move off the west coast of Africa by late Thursday. Environmental conditions there give a 40 percent chance of gradual development over the far eastern tropical Atlantic while the system moves generally westward at about 15 mph.

These particular waves are more than a week away from being any concern to the United States. However, it is now the time of year when we need to start to monitor the deep tropics. For the latest tropical forecasts and information, visit the WBRZ Hurricane Center as we navigate all 183 Days of Hurricane Season.

The Explanation: On the other side of a dissipated cold front the near the Louisiana Coast, dew points will continue to drop and allow low temperatures to drop a few degrees below average Thursday and Friday mornings. Readings will range from the mid 70s along the coast to the upper 60s in southwest Mississippi. With the front all but dissipated and the associated upper level trough pulling away to the northeast, both afternoons should be rather quiet. A weaker and faster upper level trough will cut across the southern third of the country toward the end of the week. As the axis of this trough crosses our area, there will be a 24-hour period late Friday into Saturday afternoon where an uptick in showers and thunderstorms is possible. Sunday into early next week, more typical summer weather will return with highs and lows close to average and isolated, afternoon showers and thunderstorms.