A cold front is on track to cross the area over the next 24 to 36 hours. Not only will this front result in some cooler temperatures, but humid will be swiped away by dry and comfortable air. A tranquil, pleasant stretch of weather will then carry straight through the weekend.

Today and Tonight: Tuesday will bring partly sunny skies with high temperature sin the upper 80s. Light southerly winds will mean a bit more humidity than Monday or the weekend, and perhaps provide just enough fuel for isolated showers and thunderstorms. There will be a slightly better chance for passing showers and thunderstorms overnight as a cold front comes into the region. Low temperatures will drop into the upper 60s as winds begin to shift northwesterly. 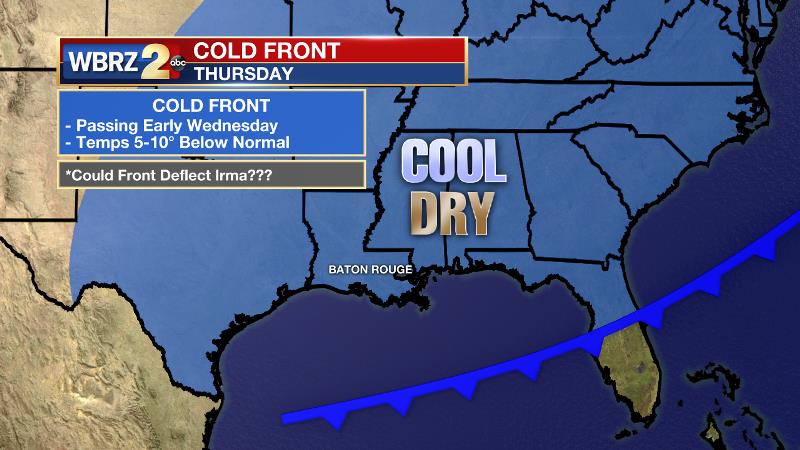 Up Next: A cold front will slowly cross the area on Wednesday. Showers and thunderstorms will end from north to south during the morning hours with dry air replacing any humidity through the day. By Thursday morning, many locations will wake up in the low 60s with some upper 50s possible north of I-12. Through the weekend, mainly clear skies will persist with high temperatures in the low 80s with low temperatures in the low 60s. Not too many "first LSU tailgates" in memory come with little or no sweat and a morning light jacket, but maybe this year!

BEAST, BRUTE, BUZZSAW... call it what you want, #Irma is a monster posing serious threats to land. Latest on #2uneIn @WBRZ pic.twitter.com/pNS7zMVggr

The Tropics: Hurricane Irma has a minimum central pressure of 929mb, with maximum sustained winds of 175mph and is moving west at 14mph. It remains too far away to be exactly sure where this powerful storm will end up. The forecast continues to trend more west, which is not good news for the United States and a landfall appears possible. Forecast models continue to indicate a hard right turn near Florida, which means threat to the Baton Rouge area is still very low. Still, it is never a bad idea to pick up supplies and keep a hurricane readiness kit fresh, especially as we enter the peak of the season. And as always, the WBRZ Weather Team is here for you, on every platform. Your weather updates can be found on News 2, wbrz.com, Facebook, Twitter and the WBRZ WX App. on Apple and Android devices. 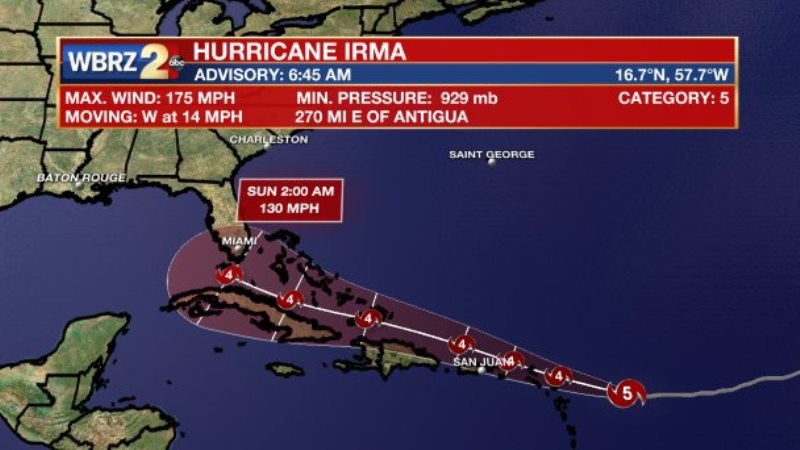 What factors might influence this turn? An upper level ridge of high pressure continues to push Irma westward through the south Atlantic. Eventually though, a cold front and associated upper level trough of low pressure is expected to snag Irma, and begin to steer the system north. Exactly where this occurs is still unknown, but trends over the last few days have suggested the shift happening near South Florida. 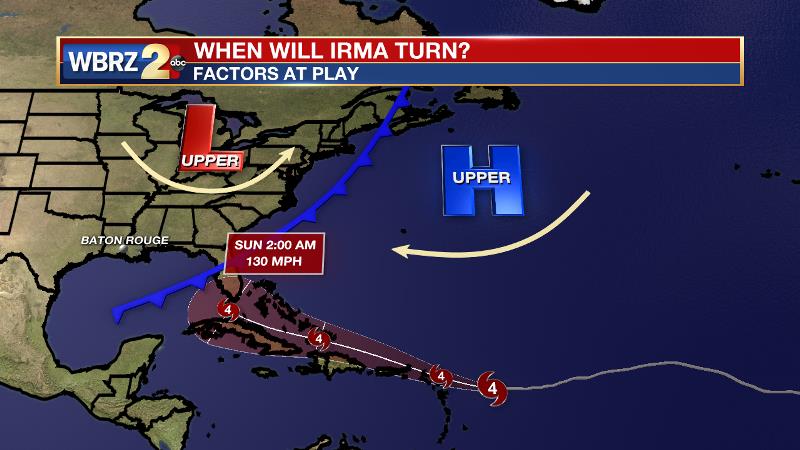 Elsewhere in the tropics, two other clusters of showers and thunderstorms have a medium chance of development over the next 5 days. One is trailing Hurricane Irma in the central Atlantic, another is in the southern Gulf of Mexico. At this time, neither poses a serious threat to the United States. Jose and Katia are the next two names on the list.

A cold front will approach the area on Tuesday night. Southerly flow ahead of that front will provide just enough moisture to allow the development of a few showers and thunderstorms, but frontal forcing appears to be weak and northerly winds are expected to outrun the boundary. All of this will lead to less than favorable conditions for widespread showers and thunderstorms. Still, given the time of year and strength of the front, it is possible that a gusty thunderstorm or two could develop. Strong cold and dry air advection will begin on the other side of the cold front. Due to the pressure fields around a high in the Midwest and Hurricane Irma in the Atlantic Ocean, northerly winds will continue for many days leading to an unusual extended stretch of pleasant weather for early September. As for Irma, a deep trough pushing across the northern tier of the country, the same responsible for shoving a cold front through the local area, will be crucial to the storm track. Whereas models initially showed that trough snagging Irma and pulling it north, the trough seems to be a bit more shallow and fast moving that initially though. This could lead to a further western track of Irma and therefore a United States impact. It is still early to jump to any conclusions on exact track, but now there is enough evidence that precautions should be taken—especially along the East Coast. Another trough could dig into the Southeastern U.S. next week, which could also deflect Irma from the Gulf. So, there is still much to find out about the eventual track. In addition, that second trough could maintain cooler and drier conditions even longer in the Baton Rouge area. The Climate Prediction Center maintains a forecast of below average temperatures over the next 14 days.