Next 24 Hours: A few high clouds may stay in the mix tonight but these will have no affect on the sensible weather. Morning low temperatures will bottom out near 59 degrees. Tuesday will be mostly sunny with light, east winds. The trend of gradually warming high temperatures will continue with afternoon thermometers in the mid 80s.

Up Next: Skies will remain mainly clear for the majority of the week. With no major features to alter the weather, high and low temperatures will gain a degree or two each day. By the end of the week, lows will be in the mid 60s and highs will be in the upper 80s. One or two spots could hit 90 degrees on Thursday or Friday. A cold front will sag south through the area on Saturday morning. That system is likely to pass without rain; and it will be followed by a sunny and mild afternoon. Overnight temperatures will return to the 50s Saturday and Sunday nights. CLICK HERE for your detailed 7-Day Forecast. 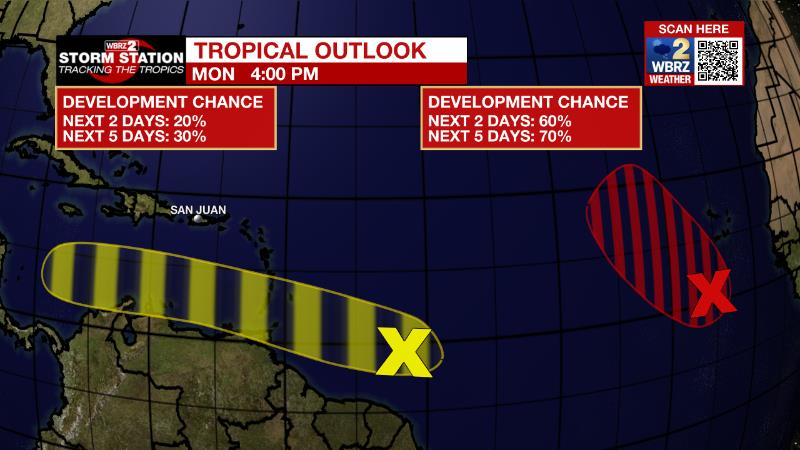 The Tropics: Showers and thunderstorms have increased today in association with an area of low pressure located a few hundred miles south-southwest of the Cabo Verde Islands. Environmental conditions are conducive for gradual development, and there is a seventy percent chance that a tropical depression forms in a day or two. Further development will become less likely late this week due to increasing upper-level winds. The system is forecast to move west northwestward and then turn northwestward by mid-week over the eastern tropical Atlantic.

Showers and thunderstorms associated with a tropical wave located several hundred miles east of the southern Windward Islands have changed little in organization during the last several hours. There is a thirty percent chance of slow development during the next several days while the wave moves generally westward at 15 to 20 mph, reaching the Windward Islands and the eastern Caribbean Sea by midweek. Interests in the Windward Islands should monitor the progress of the system.

The Explanation: A very dry air mass continues to reside over the region. Overall, the pattern will not change much through the short term period. With essentially zonal (west to east) flow in the upper levels, benign weather will continue. Occasional pockets of mid to upper level moisture could result in some passing cirrus clouds. During the middle and end of the week, the upper levels may warm just a bit translating to slightly higher afternoon temperatures. An upper level trough deepening over the Northeast U.S. will send a weak cold front into the Southeast at the start of the weekend. Without quality moisture due to lack of a low level return flow, the frontal passage should remain dry. As for temperatures, ahead of the front again temperatures look to remain in the middle and upper 80s during the day, however, overnight lows should begin to drop into the 50s again by next weekend.