Wednesday PM Forecast: rain stays in forecast but no washouts on tap

There will be a good chance of rain across the viewing are for the near future. However, no single day looks like a total washout and plenty of dry time is expected.

Next 24 Hours: Like previous nights, little more than a starry shower is expected. Mostly cloudy skies and muggy dew point temperatures will hold low temperatures in the mid 70s. Unfortunately, the rain timing for Thursday is not clear-cut. A batch of showers and thunderstorms is expected but multiple, longer lasting rounds like the previous two days are unlikely. With a break or two of sun, high temperatures will have no problem finding the mid 80s.

Up Next: There are no signs of big change Friday through the middle of next week. Each day will bring a round of showers and thunderstorms, any capable of a quick dump of rain. Saturday and beyond should begin to follow the more traditional rhythm of some early sun and warmth followed by scattered showers and thunderstorms in response. High temperatures will be flirting with 90 degrees. Low temperatures will be around 73 degrees. In general, additional 7-Day rainfall totals will range from two to four inches. This is very manageable but isolated pockets in excess of six inches are possible and these would be the “bullseye” or point locations most susceptible to nuisance flooding. CLICK HERE for your detailed 7-Day Forecast.

The Tickfaw River at Liverpool, Montpelier and Holden and the Tangipahoa River at Robert will all crest just over minor flood stage in the next few days.

In general, rain and runoff should gradually ease over the next few days so not to worsen these levels. #LaWX pic.twitter.com/FHu3xAmQuO

Area rivers have been on the rise due to the recent rainfall. Other than the Tangipahoa at Robert, none are expected to crest above flood stage.

The Tropics: A tropical wave a few hundred miles east-southeast of the Windward Islands continues to produce disorganized showers and thunderstorms. There is a twenty percent chance that environmental conditions become more conducive for slow development of this system after it crosses the Windward Islands into early next week.

The next tropical wave is forecast to move off the west coast of Africa in a day or so. There is a twenty percent chance that environmental conditions could support some slow development of this system late this week or over the weekend while it moves westward at 10 to 15 mph . 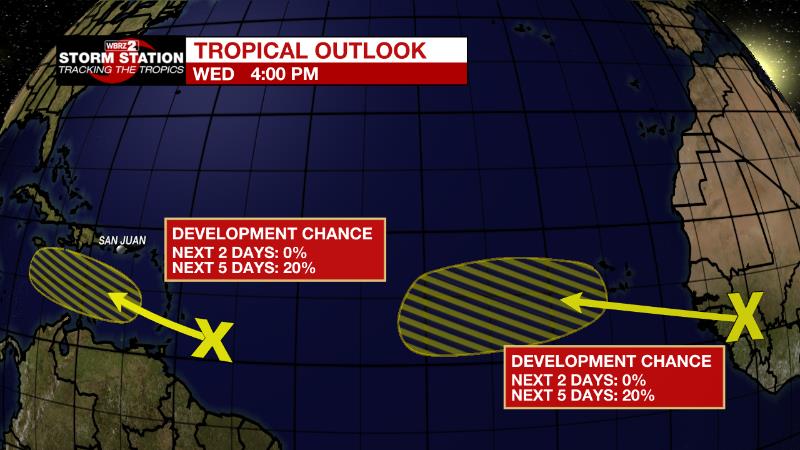 The Explanation: A weak surface low and front will remain stalled across the central Gulf Coast through Thursday. Aloft there will be ample instability and moisture so that another round of showers and thunderstorms may be expected. The timing is a little less clear than previous days, but we can say it is not likely to be an all-day rain and most locations should get wet at least once. This will be the case for Friday as well. Although the surface low and residual front should be gone by then, instability and moisture will still be in place. In this case, some daytime warming will be needed to spark convection. There are no big changes to the surface or upper level setup through Sunday and so scattered action is expected each day over the weekend. Early next week, a bit of drying in the column could cut down on the areal coverage in showers and thunderstorms but calling for a dry day anywhere is just grasping for straws.