BATON ROUGE- Dropping in by helicopter, LSU Football Coach Ed Orgeron made his first public appearance in a while to inspire some recent high school grads.

Orgeron was among the voices congratulating East Baton Rouge's graduating seniors at a tailgating event sponsored by the EBR Mayor's Office, EBR Sheriff's Office, and the Louisiana Leadership Institute.

"I was so happy to be here," Orgeron said. "This is the first time I've been out of the office in eight weeks."

'O' was the commencement speaker at the Louisiana Leadership Institute's graduation ceremony, a group of academically talented teens from schools across the parish.

"I want to encourage you to chase your dream, that's your dream. God put that in your heart, he put it in your mind. That's for you. That's your path. We don't really know where our path is gonna be, but if we follow it and we follow God and we do the right thing, it's gonna happen to you," Coach O said.

His speech was short, but the message was timeless.

"Go chase your dream. Everybody has a dream. I achieved my dream job at LSU because I got my education. Education is the number one factor in all our lives."

And for those who could not attend or did not get a chance to walk across a stage, he offered this extra bit of advice.

After his speech, Coach O helped hand out diplomas to the seniors, taking photos with the graduates as he proudly wore an LSU face mask.

In total, 64 graduates crossed the stage. Each of them received a $1,000 scholarship to spend on technology for next year.

After the commencement ceremony, Coach O told WBRZ he misses his Tiger Football team and looks forward to the upcoming season as he believes they will be in good shape.

Coach O on how he's doing and what he's expecting this fall. @WBRZ pic.twitter.com/thMZEkd8Nt 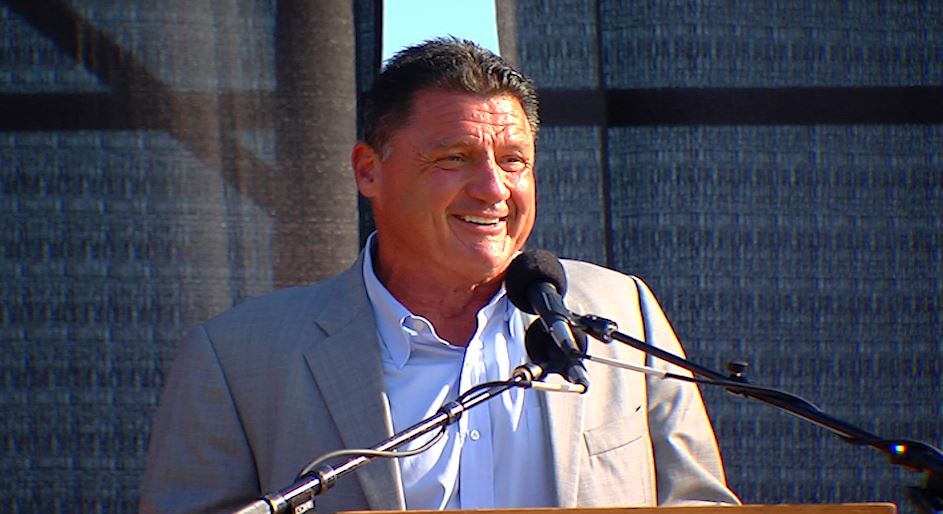