The threat for street and poor drainage flooding will end Tuesday evening as a weak cold front continues to crawl south across the viewing area. This front will not make any major changes, though drier afternoons and slightly less humid mornings are in store Wednesday and Thursday.

Next 24 Hours: Lingering showers and thunderstorms will slowly end from north to south through the evening hours. The radar may not be empty until after midnight. Some clearing is expected by daybreak as lows dip into the low to mid 70s. A light, northeast breeze will usher in some drier air, by August standards, on Wednesday afternoon. The result of this change will be fewer showers and thunderstorms. Really, anything that can develop should be confined to the coast. No break from the heat—highs will hit 90 degrees.

Up Next: We always use dew points as a better gauge for humidity than the relative humidity because the latter is, well, relative. Around here, dew points remain in the 70s for much of summer so when they dip lower, we feel some drier air. That will happen Wednesday night through Friday morning. Some areas north of the highways may even dip into the upper 60s at night! However, it is still August, so despite a drier and mostly sunny afternoon, Thursday afternoon will still clip 90 degrees. The next upper level disturbance will swing by with more showers and thunderstorms Friday and Saturday as humidity slowly climbs again. CLICK HERE for your full 7-Day Forecast. 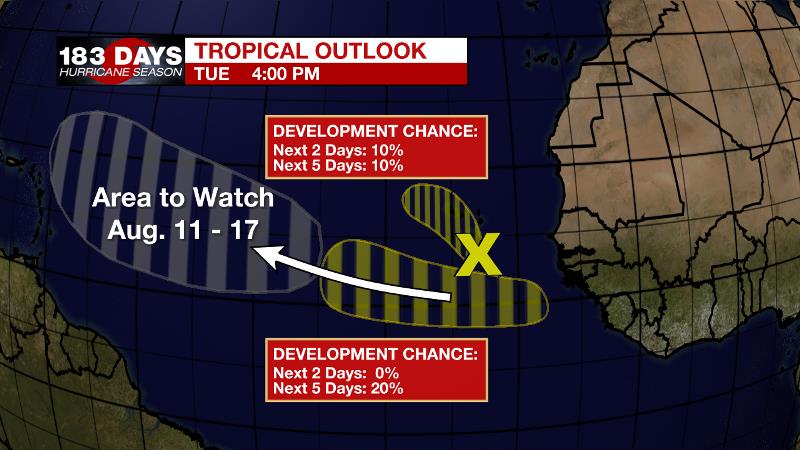 The Tropics: A small area of low pressure about 100 miles south of Praia in the Cabo Verde Islands only has a 10 percent chance of development before it moves northward over cooler water. Another tropical wave is forecast to move off the west coast of Africa by late Thursday. This system has a 20 percent chance of development over the far eastern Atlantic through the weekend while it moves westward. The Climate Prediction Center also highlights an area west of the National Hurricane Center 5-Day Forecast that could be favored for tropical development in the second week of August. These particular waves are weeks away from being any concern to the United States. However, it is now the time of year when we need to start to monitor the deep tropics. For the latest tropical forecasts and information, visit the WBRZ Hurricane Center as we navigate all 183 Days of Hurricane Season.

The Explanation: An upper level trough currently encompasses the eastern half of the country with an associated remnant front draped across the local area. Overnight, the front will sag south and continue a slow decay between the Louisiana Coast and I-10. Dew points will drop a little as the front passes and this could allow low temperatures to drop a few degrees below average Wednesday through Friday mornings. Readings will range from the mid 70s along the coast to the upper 60s in southwest Mississippi. With the front all but dissipated and the associated upper level trough pulling away to the northeast, Wednesday into early Friday should be rather quiet. What is left of the front on Wednesday could support isolated showers and thunderstorms near the coast, but inland sections should stay mainly dry due to a drop in the atmospheric moisture. A second, smaller and faster upper level trough will cut across the southern third of the country toward the end of the week. As the axis of this trough crosses our area, there will be a 24-hour period late Friday into Saturday afternoon where an uptick in showers and thunderstorms is anticipated. Sunday into early next week, more typical summer weather will return with highs and lows close to average and isolated, afternoon showers and thunderstorms.