The coolest temperatures since late May are anticipated tonight. Pleasant, early fall weather is in the forecast through Saturday.

Next 24 Hours: Beneath clear skies, low temperatures will slip into the low to mid 60s tonight. Friday will start nice and comfortable. With abundant sunshine, high temperatures will warm into the mid 80s without any pesky humidity. Winds will be out of the north at 5-10mph.

Up Next: For a second straight morning, Saturday will start with low temperatures in the low to mid 60s. The subsequent afternoon will be sunny and warm in the upper 80s, but not humid. Both LSU and Southern will have beautiful conditions for the home opening weekend of football and tailgating. By Sunday, winds will shift back to the south returning a little mugginess and enough moisture to put afternoon showers and thunderstorms back on the board into next week. Some tropical moisture may surge north to increase activity Monday through Wednesday. CLICK HERE for your full 7-Day Forecast.

The Tropics: Tropical Depression Mindy has moved over the southwestern Atlantic. Heavy rain may continue across portions of Georgia and Florida through Thursday evening as the system pulls away to the east-northeast. Gradual weakening is expected and this system will become a remnant low by Friday.

Hurricane Larry is expected to cause dangerous swells and rip currents from Bermuda and across the Eastern Seaboard through the end of the week. With maximum sustained winds of 90mph, gradual weakening is expected over the next few days as Larry accelerates north at 15-20mph. 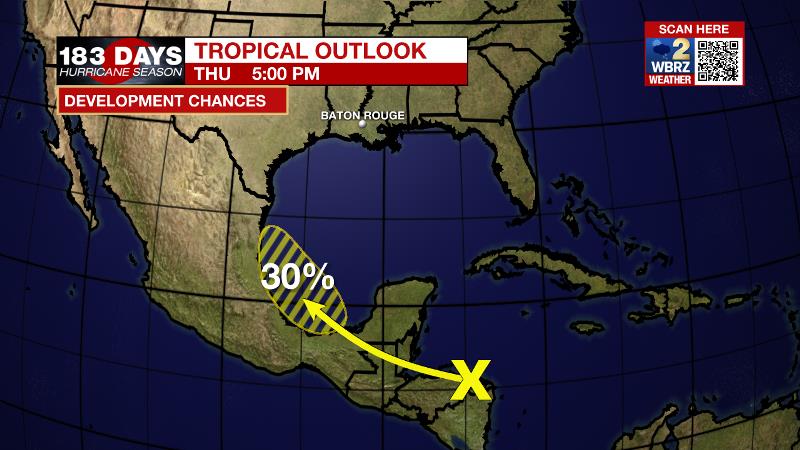 A tropical wave is producing disorganized showers and thunderstorms over northeastern Honduras and the western Caribbean Sea.  This system is forecast to emerge over the southern Bay of Campeche on Saturday.  Environmental conditions support a 30 percent chance of gradual development before the disturbance moves over mainland Mexico early next week.

A strong tropical wave is expected to emerge off the west coast of Africa Saturday. Environmental conditions are forecast to be conducive for development thereafter, and there is a 60 percent chance that a tropical depression forms late this weekend or early next week as it moves west-northwestward over the far eastern Atlantic.

The Explanation A cold front has pushed through the area into the northern Gulf of Mexico and delivered a slightly cooler and much less humid air mass. Dew point temperatures will fall out of the oppressive low 70s and into the dry and comfortable upper 50s. Since these readings set a basement for overnight low temperatures, much more cooling potential is on the table. Thursday through Saturday will feel quite pleasant by early September standards, as a result. Expect low temperatures in the low to mid 60s with high temperatures in the mid to upper 80s. Additionally, the drier air will make convection (showers) unlikely. If any storms develop, they will be mainly near the coast where slightly more moisture is available. After the short stint of comfort, onshore flow from the Gulf will quickly send moisture and stickiness inland across the area on Sunday. Since it will take some time to saturate in full, only isolated showers and thunderstorms are expected Sunday afternoon, mainly south of I-10. Due to a weak tropical disturbance along the Texas Coast, atmospheric moisture will be above average on Monday and Tuesday. Scattered to widespread showers and thunderstorms are expected and a few of them could cause street and poor drainage flooding. 2-4 inches of rain is expected early next week, with the highest amounts most likely south and west of Baton Rouge. A weak cold front will stall in the area by the middle of next week to maintain rain chances. Temperatures will be near average for the time of year.