Environmental factors have significantly diminished Tropical Storm Marco. Outer rainbands are struggling to hold together and all the watches and warnings have been removed from the Baton Rouge Metro area. The largest impacts will be isolated to the coast in the form of storm surge and strong winds. Isolated showers could be strong over the Baton Rouge area today, and the main threat is the possibility of isolated tornados. There will be periods of sunshine today between showers and storms.

?? #BatonRouge: Marco is a DUD, not a bad day at all ??, relatively speaking. Important to note that we could still have some gusty showers and coastal areas could still have wind and surge but apart from that, impacts will be minor. pic.twitter.com/Ae4H2ueCuW

As of 10 AM Monday, with 50 mph winds, Tropical Storm Marco was about 55 miles southeast of the Mouth of the Mississippi River, moving northwest at 8 mph. Marco is expected to move along the Louisiana coastline as a strong tropical storm with 40mph winds on Monday midday. Rapid weakening is expected once the storm starts to interact with land. A summary of bulletins and expected impacts follows.

A TROPICAL STORM WARNING Has been issued for Assumption, St. James, and St. Mary parishes.

A FLASH FLOOD WATCH has been issued for Assumption, St.James Parish, and St. Mary parishes from 1 am Monday through 3 am Tuesday morning.

As of 10 AM Monday, with 65mph winds, Tropical Storm Laura was 65 east-southeast of Cayo Largo, Cuba moving west-northwest at 20 mph. As Laura continues west-northwest over the next few days it will interact with Cuba, perhaps limiting significant strengthening. However, Laura will emerge in the eastern Gulf of Mexico to highly favorable conditions for strengthening early next week. While the forecast of the system has also undergone a number of changes over the last few days, Laura is currently expected to make landfall near Vermilion Bay, Louisiana as a category 2 hurricane. Any rain, wind and surge impacts could be amplified simply due to the short time between Laura and Marco.

*Remember, please be responsible in consuming and sharing information on social media during hurricane season!* 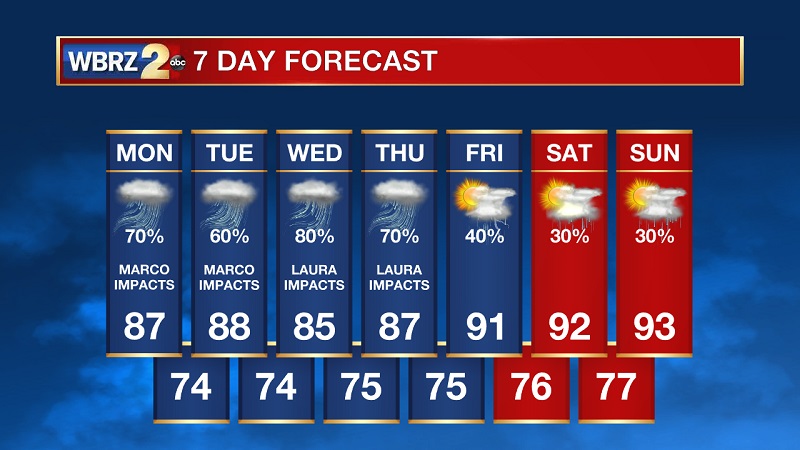 Up Next: Tuesday may continue to bring some tropical showers to the area, but serve as a lull in active weather as we await the ultimate track of Laura. At this time it appears as though Laura could begin spreading some rain northward into the region as early as Wednesday morning. With the current forecast track, the Baton Rouge area could experience heavy rain, strong winds and isolated tornadoes Wednesday and Thursday. Surge could still be a significant problem on the coast. The pattern should finally ease toward normal as we move into next weekend.