Through the first half of the week, standard summer weather is expected. Eyes will be on the tropics as a disturbance could bring a spell of rain by next weekend.

Next 24 Hours: Any isolated showers and thunderstorms are expected to diminish early this evening. The rest of the night will be mostly clear with lows in the mid 70s. Tuesday will be partly sunny with highs in the low 90s. Feels-like temperatures will top out in the 100-105 range during the heat of the day. Isolated showers and thunderstorms should pop in the afternoon, especially along and south of the interstates.

Up Next: Wednesday and Thursday should be mainly dry with highs in the mid 90s and lows in the mid 70s. All eyes turn to the south by Friday. Regardless of an officially named storm, a plume of tropical moisture will move over the area. A period of wet weather is expected Friday afternoon through Sunday morning. As is the nature of tropical rainfall, it could be torrential at times. The current expectation is for about 5 inches of rain, but isolated amounts up to 10 inches could be possible. Of course, as a system has yet to develop, forecast confidence is lower at this time but will increase through the week. If you live in the Baton Rouge area, it will be important to get weather updates through the week. CLICK HERE for your full 7-Day Forecast. 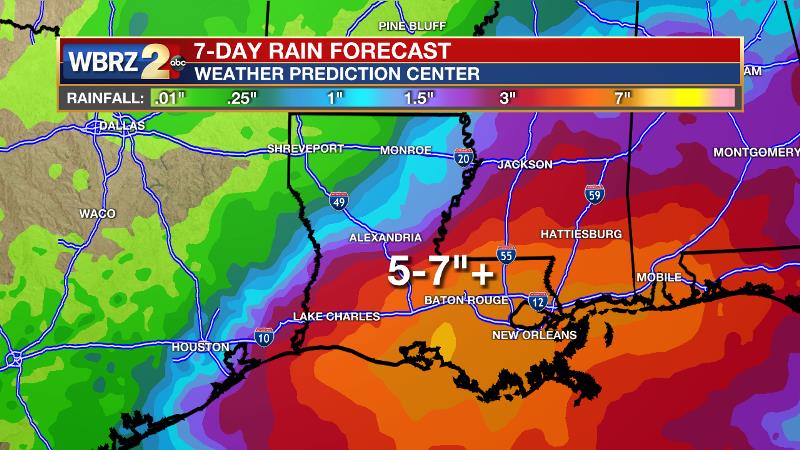 The Tropics: Showers and thunderstorms have continued over the Bay of Campeche in association with a broad area of low pressure. Gradual development of this disturbance is possible during the next couple of days while it meanders near the coast of Mexico.  The system should begin to move northward by midweek, and there is a 70 percent chance that a tropical depression forms late in the week when the low moves across the central or northwestern Gulf of Mexico.

Tropical Storm Bill formed on Monday evening off of the coast of North Carolina. A depression first formed earlier in the day. The storm will not harm land while accelerating away from the United States and then dissipating Wednesday. 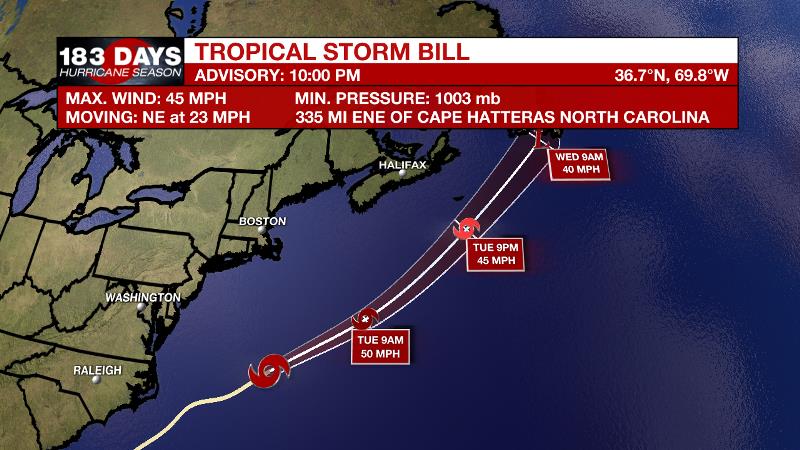 A strong tropical wave located several hundred miles south- southeast of the Cabo Verde Islands is maintaining a large but disorganized area of shower and thunderstorm activity. There is a 20 percent chance of some development of this system before a combination of dry air aloft and strong upper-level winds limit any chance of formation while the wave is over the central tropical Atlantic Ocean late this week.

The Explanation: The middle of the week will be warm and mostly dry as the eastern perimeter of an upper level ridge nudges overhead. This ridge will increase sinking air processes, which contribute to warming temperatures and work against convective development. Additionally, sitting on the eastern fringes of the ridge, upper level winds will be out of the north and drier. While this too works to suppress showers and thunderstorms, any updrafts that can form in the warm air mass could tap into this dry air to create gusty wind in thunderstorms. Therefore, while Tuesday through Thursday will not be completely dry, most locations will miss rain—especially Wednesday. Into Friday, all forecast focus will be on the tropics. Confidence is low in the eventual development, track or strength of a tropical system. However, confidence is higher that the eventual evolution of this system will lead to increasing moisture in the atmosphere over the local area, which will lead to a period of wet weather. By Friday, showers and thunderstorms will develop across the area in response to increased moisture and lift in the environment on the northern fringes of the tropical disturbance. Even if it is a messy, poorly organized system, it is expected to be slow moving enough to allow periods of rain to stay in the forecast through at least Sunday morning. With near record moisture content in the atmosphere, rain could be very heavy at times and forecast models are pointing to 5 inches on the conservative end and 10 inches on the aggressive side. That alone should indicate that the local area should pay attention to the progress of this system and continue to get updates from our weather team.