Once showers and strong thunderstorms push east, a period of quiet weather is ahead. Finally, a mainly dry weekend is expected! As of Thursday morning, several hail reports have come in around the Capital Area including Livonia, Maringouin, Denham Springs and Livingston. Wind damage occurred in Zachary and a significant tornado appears to have rolled over northern Pike County. 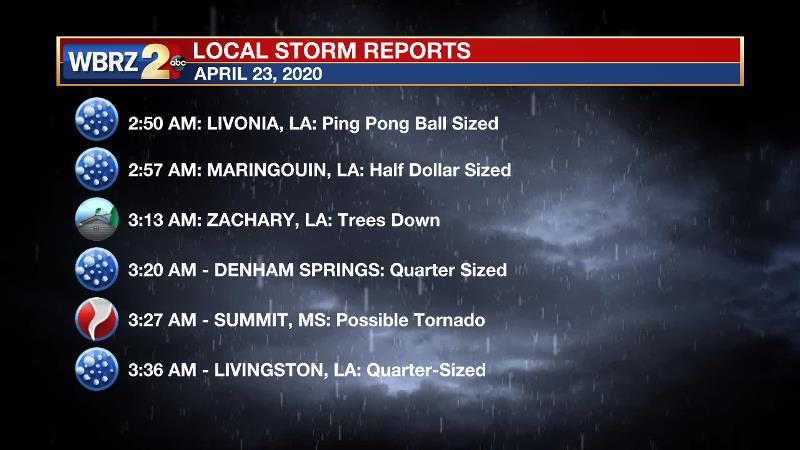 Today and Tonight: After an active night of weather, a cold front west of the Baton Rouge area may still trigger scattered showers and thunderstorms through early afternoon. While the atmosphere was well worked over by the overnight storms, daytime warming could lead to some destabilization so that one or two storms could still be strong. Some sun could peek out late Thursday with highs in the low 80s. Overnight, clouds will continue to break with lows sneaking into the upper 50s.

Up Next: Much drier and mild conditions are then expected to last Friday through the weekend. Friday will remain rather warm but a weak cold front will come by at night. This front could stir up a stray shower but that seems to be it as far as precipitation is concerned over the weekend. Average temperatures for the time of year are highs in the low 80s and lows in the low 60s. Forecast numbers are close to that.

The Mississippi River: At Baton Rouge, major flood stage continues with a level of 43’ as of Thursday morning. The river is expected to fall very slowly through the next two weeks. The high water is primarily an issue for river traffic and river islands, although some inundation will continue for a few spots north and south of Baton Rouge that are not protected by levees. Unprotected low-lying areas will be flooded and agricultural operations will be impacted on the west side of the river. The grounds of the older part of Louisiana State University's campus become soggy. This includes the area around the Veterinary Medicine building, the Veterinary Medicine Annex, the stadium and ball fields. The city of Baton Rouge and the main LSU campus are protected by levees at this level. The level is also high in New Orleans and the U.S. Army Corps of Engineers has opened the Bonnet Carre Spillway.

An upper level trough of low pressure and associated cold front will move through the region this morning. One more batch of showers and thunderstorms is expected to develop later this morning. Whereas most of the strong storms were north of I-10 overnight, that should shift to southern and coastal areas later today. Despite the overnight action, enough daytime warming will occur to add instability back into the atmosphere to work with the lifting generated by an approaching cold front. Therefore, the Storm Prediction Center maintains a 2/5 “slight risk” for severe weather, mainly south and east of Baton Rouge. Activity will wane into the evening hours. Drier and slightly cooler air is expected to filter in the wake of the front Thursday night, however Friday is expected to be a bit warmer due to the drier air in place and fewer clouds. Another reinforcing cold front is expected to move through the forecast area Friday night into Saturday morning. This system will be moisture starved but could feasibly stir up a shower overnight. The frontal passage will usher in quite pleasant conditions for Saturday including sunshine, low humidity and comfortable warmth. Temperatures will likely be coolest and possibly slightly below normal Sunday into early Monday before warming Tuesday into Wednesday. Another spring system will get started just to the west bringing the possibility of strong to severe thunderstorms once again by the middle of next week.