Unsettled weather has returned to the WBRZ Weather Forecast area. While showers are a possibility each day through Monday, no washouts are expected.

Today and Tonight: Showers and thunderstorms will push through the area on Friday—especially during the first half of the day. There is an outside shot that one or two thunderstorms could be strong, but overall, ingredients for severe weather are minimal. Despite clouds and rain, highs should still be able to climb into the mid 70s. Mostly cloudy skies will persist overnight with spotty showers and lows in the mid 60s.

Up Next: Saturday brings a tricky forecast. Many forecast models suggest similarly to Friday that widespread showers and thunderstorms will develop. However, there does not seem to be any organized mechanism out there to cause such action. There will be a dissipated cold front in the region, so with some daytime warmth, scattered showers may breakout into the afternoon hours. Sunday seems to bring a better chance of rain and storms as the next cold front dives into the area. This one will be supported by a few more ingredients for severe storms, so we will need to keep an eye on that. A third front will finally kick through the region late Monday, effectively ending the unsettled stretch. Weekend highs will be in the 80s with lows in the 60s. By the middle of next week, temperatures will be closer to average. 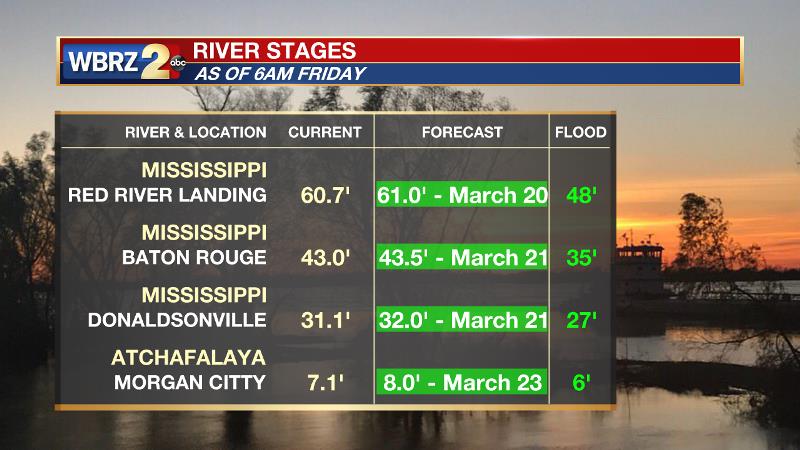 The Mississippi River is expected to crest within the next week, around March 21. Given the current forecast, impact outside of the levees is expected to be minimal with the exception of soppy land around the Angola farms and by the LSU veterinary complex. River island inundation will continue as well. The prolonged period with water running high could result in additional seepage and boils around the levees as well. On the river, traffic and industrial operations will be restricted. Levees protect highly populated areas around the river, including Baton Rouge. In Morgan City, the Atchafalaya River will also crest near the end of next week. Give the projected level of 8 feet, some water may make it into buildings at the foot of Ann Street and in Berwick on the river side of the flood walls. Backwater flooding could occur in Stephensville as well.