Today and Tonight: Showers and storms are likely mostly in the afternoon hours. A few morning showers are not out of the question. Though most will see some rain today, it will not be constant rain. Showers and storms that do pop up could be capable of dropping a quarter to half an inch of rain on areas that already have seen several inches in the last 24 hours. The Flash Flood Watch remains in effect until 7 pm for that reason. Between the showers, temperatures will heat to near 85 degrees. Some rain will linger into the overnight hours but will largely wrap up by 11 pm. Overnight lows will be near 73. 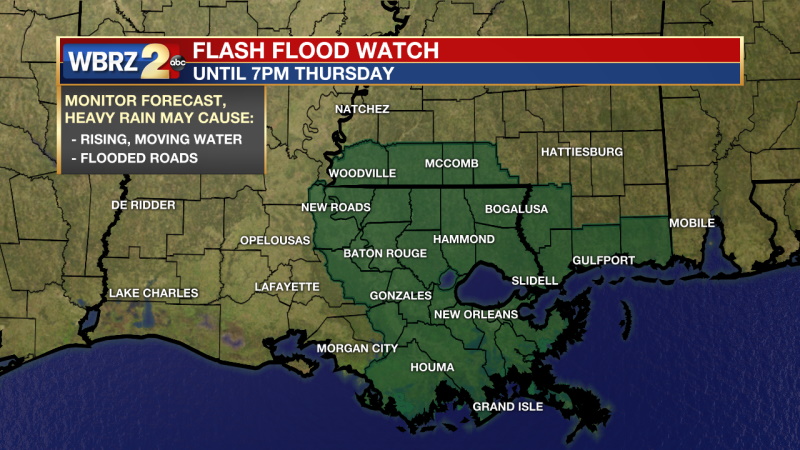 Up Next: Beginning Friday, rain chances will be concentrated in the afternoon hours. Besides a few showers, we will have plenty of sun on Friday allowing us to heat into the low 90s. Saturday will be a similar story, but we can expect larger rain coverage throughout the day, about 40%. Sunday, Monday, and Tuesday all have a 30% chance for afternoon rain, and temperatures will be in the upper 80s and low 90s. When it’s not raining, it will be muggy and overnight lows (or not so lows) will be near 74 degrees.

The Tropics: No active advisories.

Southern Louisiana remains at the base of a longwave trough axis. A vorticity max over Texas will move over Southern Louisiana this afternoon. This will act as a lifting mechanism and paired with 2-inch precipitable water amounts, afternoon showers and storms are likely. Locally heavy rainfall is a possibility and the Flash Flood Watch remains in effect for that reason. Drier air is expected to move in tonight into tomorrow morning allowing for a drier pattern for the weekend.