Heat and steam round out a week of above average temperatures. Rain coverage will be minimal once again, but that will change by early next week. On Thursday, the area once again struggled to find showers with less than 10 percent of the 13 Parish, 3 County forecast area recording measurable rainfall. 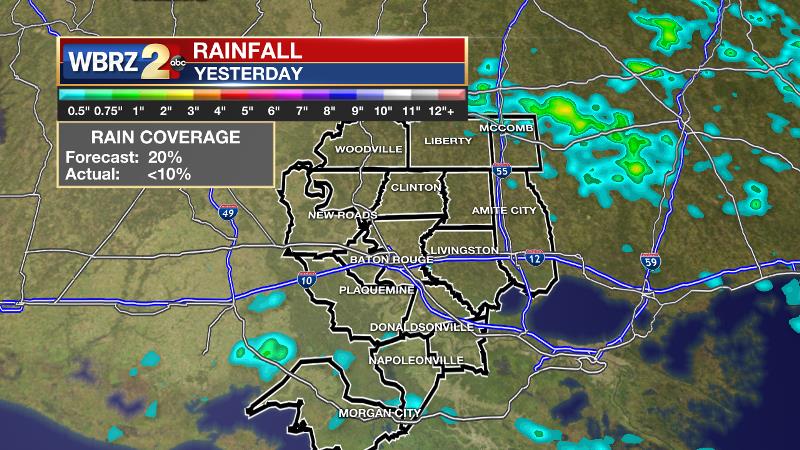 Therefore, it was not a problem for temperatures to hit 90 degrees in the Baton Rouge area for the 46th time this year—a record through the first half of any year since 1892.

This is the HIGHEST NUMBER OF 90° DAYS #BatonRouge has ever recorded through the first half of the year. #LaWX (@BTRairport data since 1930, other area data since 1892) pic.twitter.com/Wj2C6EJdGA

Today and Tonight: A fast climb on thermometers will show temperatures in the 90s by lunchtime. The top out reading will again reach 95 degrees in many locations beneath mostly sunny skies. High humidity will lead to feels like temperatures between 100-105 degrees during the afternoon. Friday will also bring the lowest rain coverage of the week. There is some bust potential on this aspect of the forecast as a morning cluster of thunderstorms was observed drifting southwest through Mississippi. While this cluster is expected to fall apart, any lingering outflow boundary from this could feasibly develop showers and storms later Friday; we will keep an eye on this and keep you updated on social media. A muggy overnight will follow with lows barely slipping out of the 80s.

Up Next: Saturday will be transitional with showers and thunderstorms increasing in coverage by the back half of the weekend. Added rain around the region will cause high temperatures to come down by a few degrees. Scattered, mainly afternoon activity is in the forecast Sunday through Tuesday. At this time, Monday and Tuesday look like the most active period due to an upper level disturbance moving across the Gulf Coast.

Morning water vapor imagery showed a decaying squall line drifting southwest through Mississippi. Meanwhile, a surface trough stalled along the eastern Gulf Coast. Either of these features could trigger convective development during the day; however, both are expected to remain just outside of the forecast area. As close as they are positioned though, there is some bust potential on the rain coverage forecast. An upper level ridge axis will move overhead on Friday leading to more hot conditions and the lowest rain chances of the 7-Day forecast. Once that ridge settles northeast of the region, slightly more convection will be firing over the following days. Scattered, mainly afternoon showers and thunderstorms will develop Sunday through at least early next week. Due to the added cloud cover and precipitation, most locations will see high temperatures reduced by a few degrees, below average but still near 90. Forecast models continue to hint at an inverted trough and upper level disturbance being driven across the Gulf Coast due to the parked ridge in the Northeast. Should this occur, a day or two of widespread rain could be the outcome in the Monday or Tuesday timeframe. The Weather Prediction Center is indicating that a general 1 -2 inches of rain could occur between Sunday and Tuesday. The trough then looks to flatten out by the end of next week, somewhat reducing rain chances.