Significant forecast changes mean we now expect a continuation of the hot, mainly dry weather pattern. A developing tropical disturbance is expected to remain closer to Florida with no impact to the local area.

Today and Tonight: Your Friday will be hot and humid with mostly sunny skies guiding high temperatures into the mid 90s. Like Thursday, a stray shower is possible during the afternoon hours. Overnight will be mostly clear with low temperatures in the mid 70s. Generally, light winds are expected.

Up Next: Only slight day-to-day variations are expected in the weather through the middle of next week. Some moisture streaming west from a tropical wave in the central Gulf will continue to hold the possibility of one or two afternoon showers on Saturday. Fortunately, for LSU and Southern football, Saturday just looks like a standard, steamy, late summer afternoon and neither game should have worse than a brief thunderstorm. While it previously looked as though a tropical disturbance would increase rain chances late weekend into early next week, it now appears as though our weather will see very little impact from the system. A weakening cold front will limp into the region and depending on its southern progress; this could provide a small enhancement to shower development on Sunday. Otherwise, status quo weather is carried well into next week. 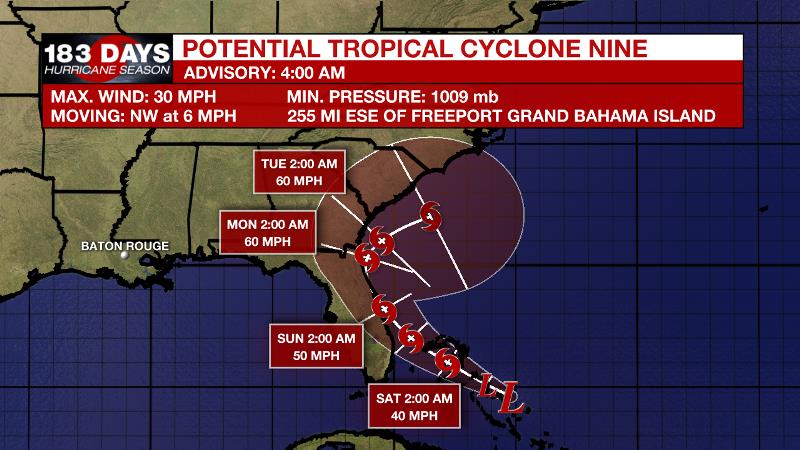 *The "potential tropical cyclone" designation was created two years ago allowing the government forecasters to issue tropical storm and hurricane bulletins before a storm has actually formed.

The Tropics: Potential Tropical Cyclone 9 will likely become a tropical depression or Humberto as it moves across the northwestern Bahamas and near eastern Florida this weekend. Model guidance is in agreement that entry into the Gulf of Mexico is unlikely and the local area will experience no impact from this system. Rain and tropical storm force winds are possible in the Bahamas and coastal Florida this weekend and early next week. Additionally, two tropical waves near the Cabo Verde Islands are being monitored for development next week. 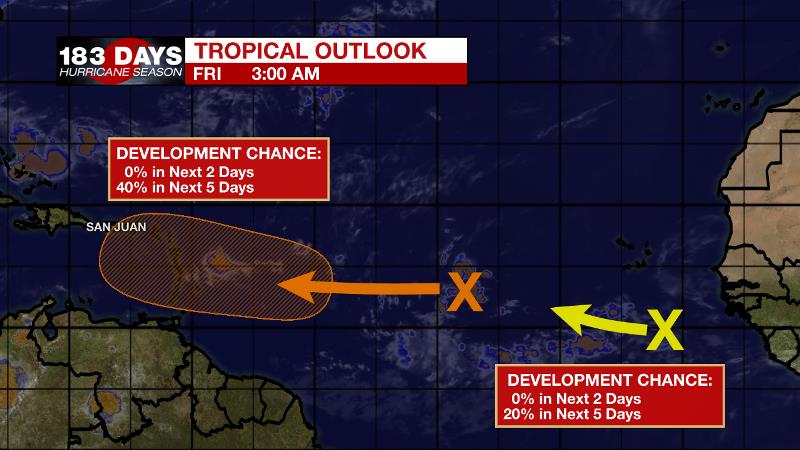 An upper level ridge will broaden over the region this weekend. This will help keep dry air over the area and therefore hot, mainly sunny days. There is a chance that a few showers could form any day but coverage will not exceed 10-20%.