In January 2004, Mars Rovers Spirit and Opportunity bounced onto opposite sides of the Red Planet for a mission that was only supposed to last 3 months. Over 14 years later, Opportunity is still answering questions by researching the surface of Mars, but that could have all ended the morning of June 12th. That morning was the last contact that mission control had with the rover, as a massive dust storm raged around “Oppy”. 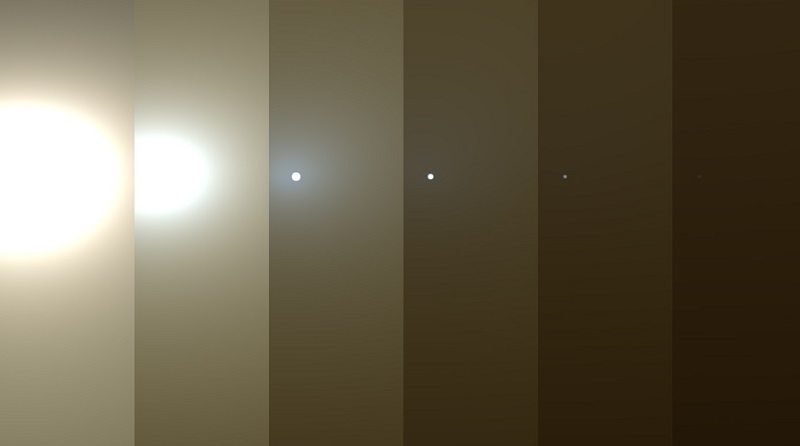 This series of images shows simulated views of a darkening Martian sky blotting out the Sun from NASA’s Opportunity rover’s point of view, with the right side simulating Opportunity’s current view in the global dust storm. Photo Credit: NASA/JPL-Caltech/MSSS.

These two views from NASA’s Curiosity rover, acquired specifically to measure the amount of dust inside Gale Crater, show that dust has increased over three days from a major Martian dust storm. Photo credit: NASA/JPL-Caltech/MSSS.

Researchers are expecting that the rover entered an automatic low-power hibernation mode, due to the lack of solar power – its power source. On June 3rd, it was only absorbing 22 watt-hours from its panels, which is less than four percent of the normal energy it generates. Unlike the newer, nuclear-powered Curiosity, Spirit and Opportunity are solar powered rovers, which both had to temporarily shut down in 2007 during a similar global dust storm. 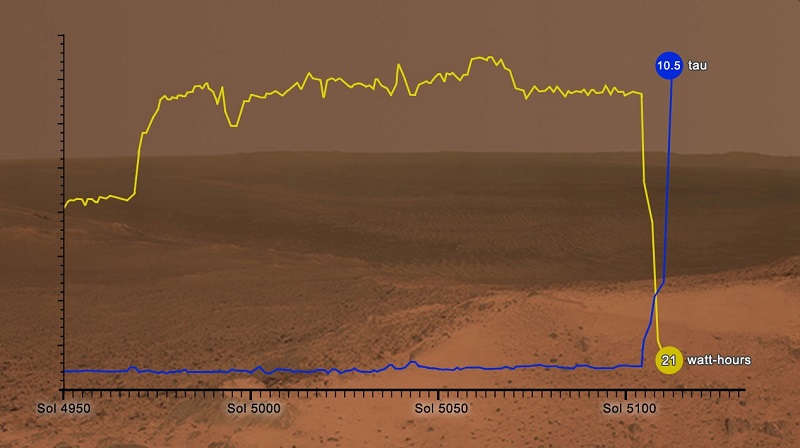 This graphic shows how much energy available to NASA’s Opportunity rover on Mars (in watt-hours) depends on how clear or opaque the atmosphere is (measured in a value called tau). When the tau value (blue) is high, the rover’s power levels (yellow) drop. Figure credit: NASA/JPL-Caltech/New Mexico Museum of Natural History.

The red planet is infamous for intense dust storms, sometimes kicking enough dust up to be seen by telescopes here on Earth. Beyond the large annual storms on the surface of Mars, there are massive, global storms that occur once every three Mars years – or around 5.5 Earth years. The wind speeds of these storms are not that high, topping out at about 60 miles per hour, but that is a little misleading. The atmosphere on Mars is about 1 percent as dense as Earth, which means that the wind would have to blow much faster than it would on Earth to get a kite to fly. 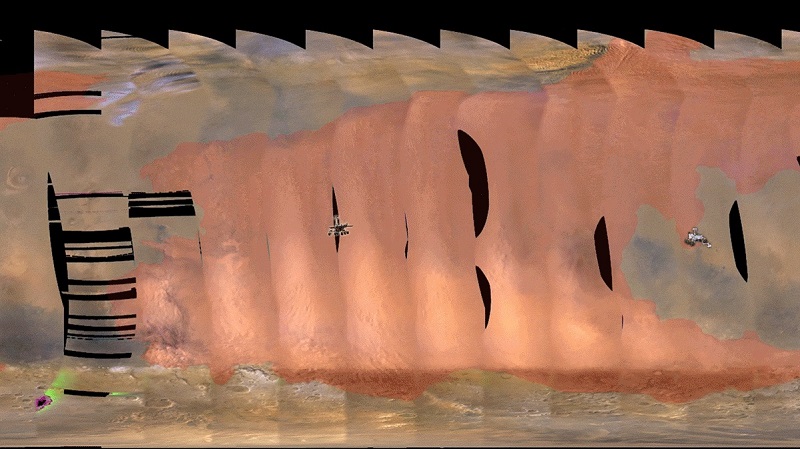 This image is from NASA’s Mars Reconnaissance Orbiter that shows a fierce dust storm (brighter red color) that is kicking up on Mars, with active rovers (Opportunity and Curiosity) on the surface indicated as icons. Photo credit: NASA, JPC-Caltech, and MSSS.

NASA is confident that Opportunity will be able to ride out the storm. At NASA’s press conference on Wednesday, the project manager for the NASA Mars Exploration Rovers, John Callas, said, “We’re concerned, but we’re hopeful that the storm will clear and the rover will communicate to us.” The concern is that it could meet the same demise as its twin, Spirit. After the 2007 global sandstorm that lasted over a month, Spirit never really got back in all six wheels. It took over a year for the rover to clean its solar arrays from the dust of the storm, but the subsequent wind also shifted the top of the Martian surface. This led to Spirit being stuck in a cache of iron sulfate that was hidden under a shallow area of normal-looking soil. Iron sulfate has very little cohesion, and since iron sulfate molecules do not like to stick together, that means that the soil is very soft – almost like quicksand. After several attempts to free itself for over a year, Spirit’s body met the iron sulfate on the ground surface, effectively ending its journey across Mars. It continued as a stationary research platform for over a year, before its internal temperatures dropped under -55°C from the combination of dirty solar panels and the lack of sunshine at its permanent location. 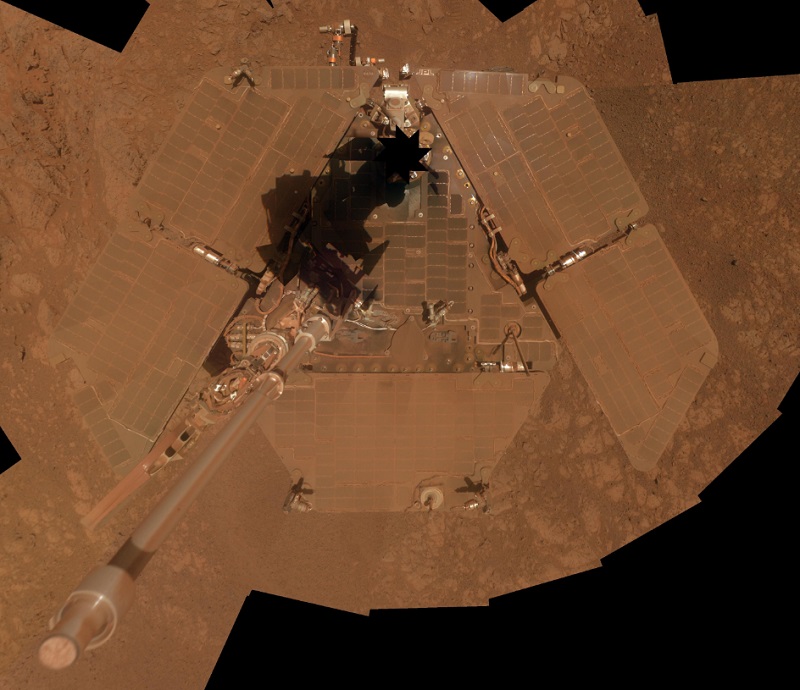 A dust storm on Mars in 2008 temporarily cuts the amount of sunlight reaching the solar array on NASA’s Mars Exploration Rover Spirit, leaving the rover in a vulnerable state. Photo credit: NASA, JPL-Caltech, and Cornell.

Color panorama from “Troy” embedding location of the Mars rover, Spirit. At the bottom of the image, the area of Iron Sulfate can been seen which the rover’s wheels are stuck in. Photo credit: NASA, JPL-Caltech, and Cornell.

Only time will tell if Opportunity will wake up. Dust storms on Mars can last from a week to up to several months. NASA is staying positive on the likelihood of the rover coming back to life in the near future. “As long as the rover stays somewhat electrically alive through the storm, it’s not going to be easy, but I’m optimistic that the team will recover the rover and pick up right where they left off,” states Mike Seibert, Opportunity’s former senior driver. Depending on how long the global dust storm lasts, reestablishing contact with the rover may take weeks to months after the dust settles. This may be the toughest battle Opportunity is up against in its 14 and a half year mission on Mars, but against all odds, it has continued on its objective of learning about the Martian planet. 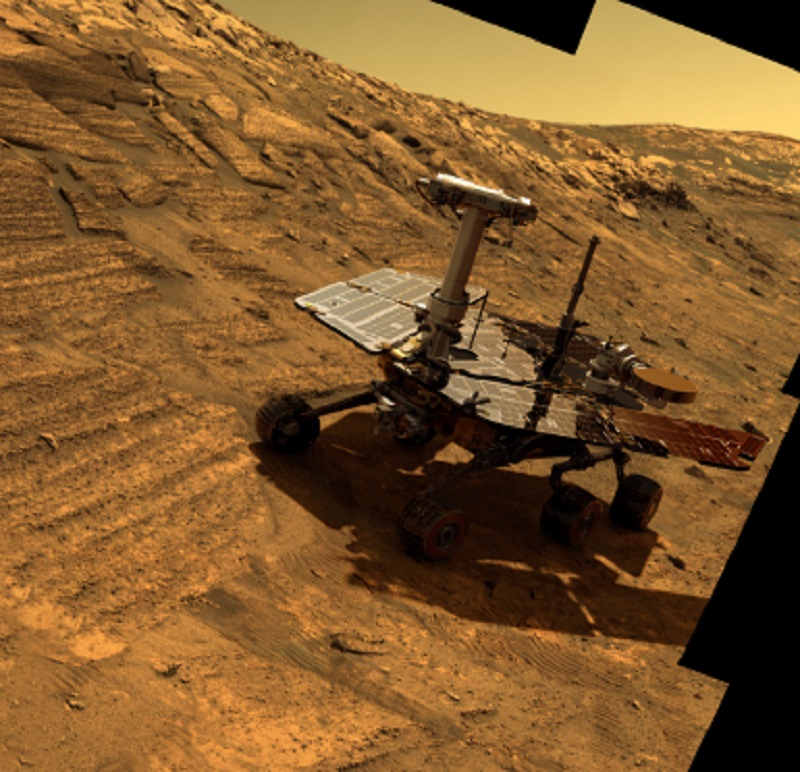 A synthetic image of NASA’s Opportunity rover inside Endurance Crater viewing “Burns Cliff”. It was created as a composite of 46 different images and a photorealistic model of the rover. Photo credit: NASA, JPL-Caltech, and Cornell.