Next bout of rain before the weekend

We have one more round of showers to get through until being welcomed by a quiet weekend of weather. Some gradual warming will occur into next week.

Today and Tonight: The local area will be between systems again on Thursday. Highs will top out around 60 degrees. Any early sun will slowly give way to thickening clouds from the west, as another low pressure will approach from south Texas late in the day. This one should be slightly stronger than its predecessor in but due to a track across the north, central Gulf of Mexico, it will still only produce showers beginning on Thursday night. Lows will stop in the upper 40s.

Up Next: Clouds and showers will continue on Friday and this will tamp down considerable warming. Temperatures will be in the mid to upper 50s for most of the day. Showers will begin to end from northwest to southeast during the afternoon hours with some clearing overnight. The most recent model guidance suggests clouds may stick around for a little while on Saturday. This will have to be monitored for temperature trends. A pair of quiet afternoons will follow with high temperatures in the low 60s Saturday and upper 60s on Sunday. More sun is expected for the second half of the weekend. Monday will be a little warmer and has a chance at reaching 70 degrees as clouds increase in advance of the next storm system, which could then linger for a few days.

The jet stream continues to be oriented from west to east with a short wave pattern across the southern third of the United States. The result of this setup is an active, but low impact weather pattern. Longer wavelengths tend more pronounced temperatures swings and therefore a greater clash in air masses and stronger storm systems. So, the positive tradeoff for dealing with rain every few days is not well above average warmth or cold and no severe weather. The next surface low will develop near the south Texas coast Thursday night and track northeastward into the central Gulf of Mexico by Friday morning. This system will generate another round of showers with a rain totals gradient from north to south across the region—the higher amounts will be closer to the coast. Regardless, this will be a manageable system for the area with most locations receiving well under an inch. 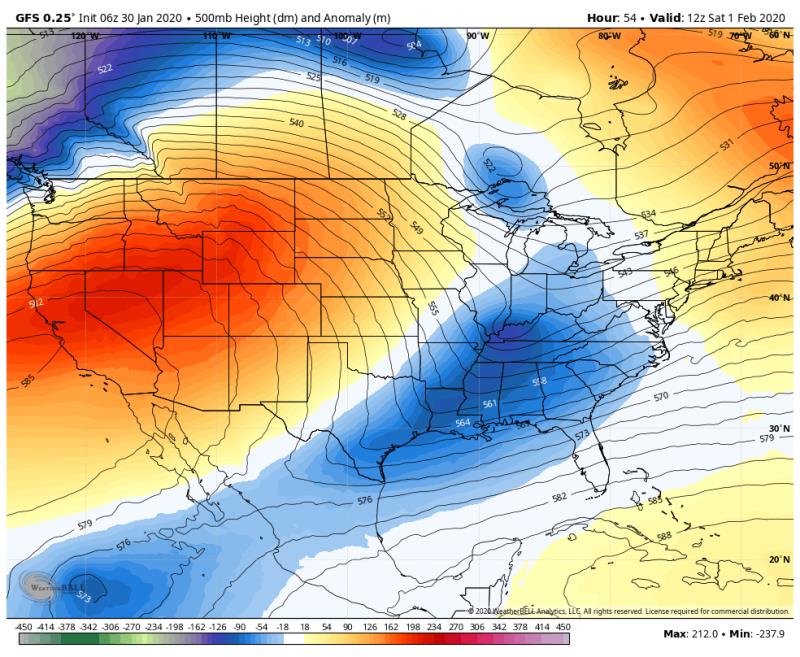 The trailing upper level trough may hold clouds over the area into the early part of the weekend. Much more sun should break out on Sunday. A deeper upper level trough and stronger associated cold front will move into the area by Monday night. Expect enough energy for some thunderstorms to develop with that one. The jet stream will stall and that may lock the area into a cloudy and showery pattern for the days that follow.