BATON ROUGE - Top brass at Louisiana State Police discussed how to reduce the agency's liability as public opinion wavered in the wake of a controversial in-custody death.

Emails obtained by the WBRZ Investigative Unit Friday show 18 months after Ronald Greene's death, agency leaders and attorneys were emailing about plans to reduce its accountability.

In May 2019, Greene had a violent encounter with State Troopers from Troop F after a high speed chase. All of it was captured on body camera footage.

State Police claimed Greene died as a result of a crash at the end of the chase.  Although, an image of the wreck showed his vehicle sustained only minor damage.

Body camera video later showed Greene was speaking with troopers after the crash.  Video from troopers' body cameras was not released by State Police for two years and only after a clip was leaked and shown on the news.

Earlier, though, sources leaked audio to WBRZ of a trooper explaining Greene didn't die in a crash, but hat he was "choked" and "beat."

In October 2020, WBRZ reported on the audio clip:

"I beat the ever living f*** out of him, choked him and everything else to get him out of control," Trooper Chris Hollingsworth said. "We finally got him in handcuffs when a third man got there and the son of b**** was still fighting and still wrestling with him trying to hold him down he was spitting blood everywhere, and all of a sudden he went limp."

In the aftermath, Troop F Commander John Peters emailed lead agency attorney Faye Morrison.  He offered an idea: Peters said reconstructionists pulled data from Greene's car and claimed he died of an aortic rupture caused by 19g's of force. In his email he claims detectives proved troopers did not cause Greene's death. 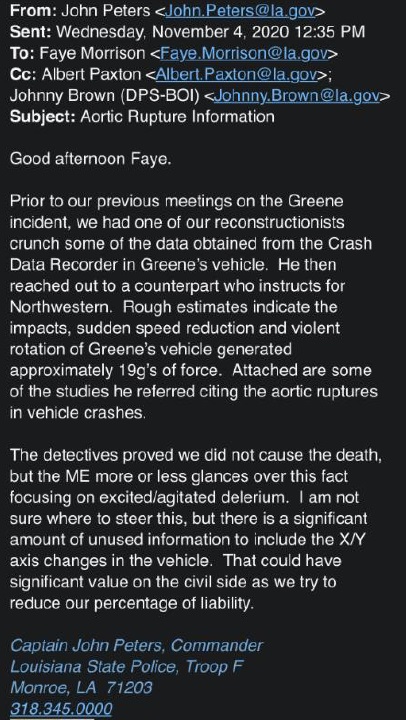 But, the body camera eventually released of the incident showed Greene alive after the wreck.

"I'm sorry," Greene is heard saying on one of the troopers' body cameras. "I'm scared."

In the email thread, Morrison responded to Peters.  She said he should save his research because it will be helpful "to provide to our attorneys for defense of department and department personnel." 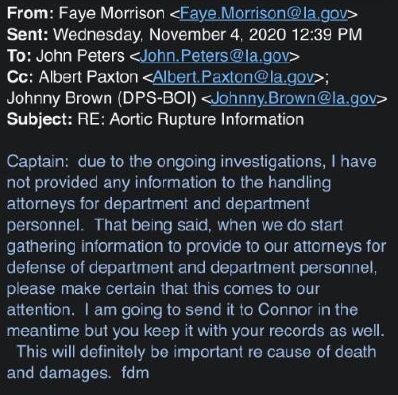 Colonel Kevin Reeves left State Police amid various scandals last year, including Greene's death. State Police told WBRZ Friday, several Troop F supervisors were disciplined related to the body camera videos but the process has not been finalized. Captain John Peters is no longer the Commander at Troop F.  Instead, he is now assigned to the Weight Enforcement Unit which oversees trucking.

A separate story seen on WBRZ this week showed Morrison, the State Police attorney, insinuating troopers can't be accused of excessive force if the people they arrest plead guilty to resisting. Multiple legal experts said her interpretation is wrong.

"You could be guilty of resisting, but it doesn't give police carte blanche to beat the hell out of you," Defense lawyer Beau Brock said.