Through the middle of the week, very warm afternoon temperatures can be expected. By Thursday, and especially Friday, some midday showers and thunderstorms should return to tamp down the duration of the 90s.

Next 24 Hours: Skies will be mainly clear overnight with low temperatures in the low 70s. Winds will be out of the south at 5mph. Tuesday will play out similar to Monday with mostly sunny skies sending high temperatures into the low 90s. There is just a slim chance for a shower or thunderstorm.

Up Next: Wednesday and Thursday will be the hottest two days of the week with high temperatures reaching the middle 90s and feels-like temperatures sliding over 100 degrees. Fortunately, humidity will not reach the highest levels we can experience on the Gulf Coast, so while an advisory may not be issued, you should take it easy and stay hydrated with some of the warmest temperatures felt so far this season. On Thursday afternoon, a stray shower is possible. However, Friday and Saturday will offer much better chances for afternoon showers and thunderstorms. In turn, this will keep temperatures from climbing higher than the low 90s and will result in cooler evenings after any showers and clouds.  CLICK HERE for your detailed 7-Day Forecast. 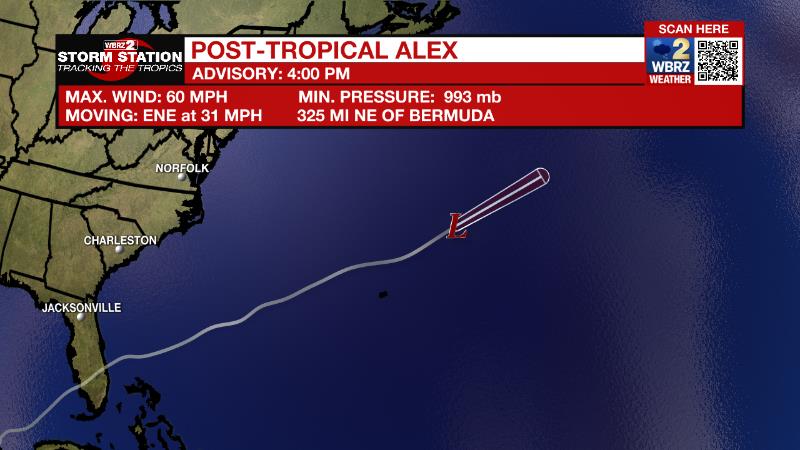 The Tropics: Tropical Storm Alex has become post-tropical over the north central Atlantic Ocean. In the final advisory from the National Hurricane Center, the still packed 60mph winds, but it will weaken while racing out to sea at 30mph over the next few days. The rest of the basin is quiet.

The Explanation: Tuesday through Thursday, an upper level ridge of high pressure will center over the central and western Gulf Coast. Associated warm temperature profiles and sinking air will make it very difficult for showers to pop. Coverage may not be at zero, but very few locations will pick up measurable rain. With these factors taken into consideration, high temperatures may reach their warmest levels so far this season with thermometers topping out between 94 and 96 degrees. Dew point temperatures in the low 70s will cause feels-like temperatures in the low 100s, but not likely high enough to warrant a heat advisory. On Friday, an upper level trough of low pressure will dig into the eastern part of the country forcing the ridge back to the west. Northwest winds aloft will send a series of weak disturbances through the region. As moisture reaches levels above average for the time of year, isolated to scattered showers and thunderstorms will be possible, especially during the afternoon hours. This pattern will continue through Saturday and possibly into Sunday before the ridge builds again.