A cold front has pushed through the area but it will stall nearby and play a role in the forecast for the next few days. Temperatures will be up and down through the week.

Next 24 Hours: As a cold front stalls in the northern Gulf of Mexico, clouds will increase overnight with some showers developing closer to daybreak. Behind that front, northerly winds will guide low temperatures into the low 50s. Tuesday will look and feel a lot different from previous afternoons. Thanks to clouds and northeast winds, high temperatures will just make it back into the mid 60s. While the day will not be a washout, a few showers and rumbles of thunder will be around with increasing activity late.

Up Next: A disturbance will cross the area Tuesday night into Wednesday causing a period of rain and thunder. As this system exits to the east, a bit of drying is expected later Wednesday. Some returning sun on Thursday will allow high temperatures to return to the 70s. Then, a strong cold front will press into the region on Friday. This system will bring scattered showers and thunderstorms. By the end of the week, an inch or two of rain will have fallen in most area. Much colder air will follow this front. Thermometers will sink into the 30s by Saturday morning and fail to leave the 50s in the afternoon. Another freeze, several weeks past the average last freeze date, is possible on Sunday morning. CLICK HERE for your detailed 7-Day Forecast. 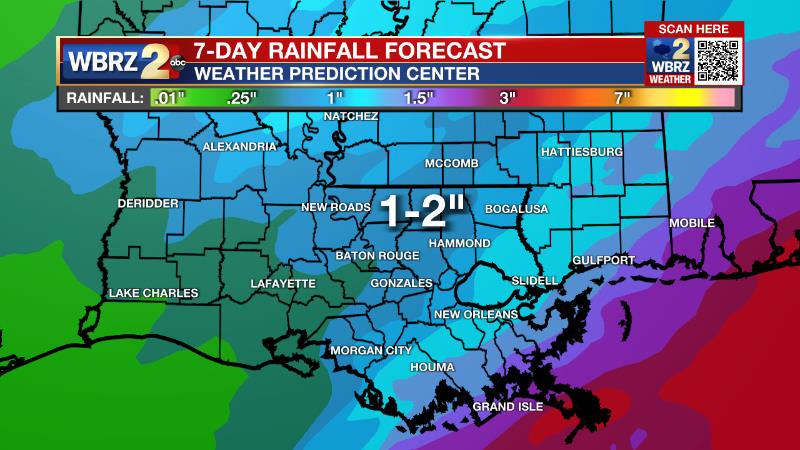 The Explanation: An upper level trough of low pressure will move well northwest of the local area later Tuesday but will cause a weak surface low pressure system to develop along a stalled cold front in the northern Gulf of Mexico. Southwest winds aloft will create a scenario where moisture is forced to rise over the front and clouds and showers will overspread the region later Tuesday as a result. As the center of the upper level trough moves northeast of the area on Wednesday night, it will send the front farther south and allow for some drying, especially away from the coast. Between Tuesday and Wednesday though, there is potential for (a helpful) inch or two of rain. Temperatures will be cooler in the wake of the front and with persistent cloud cover, expect a small range in high and low temperatures from lows near 50 and highs near 65. Thursday will bring a brief lull in precipitation with the cold front much farther south into the Gulf of Mexico, lending to a mostly dry day for inland area and warmer thanks to added sunshine. A stronger, longwave trough of low pressure will barrel across the country Thursday into Friday sending the next storm system with it. A stronger cold front will move into the area on the final day of the workweek. With that front, severe weather potential looks to be low but the clash in air masses should be enough to produce scattered showers and thunderstorms. Strong surface high pressure will build in from the north behind the front with stiff northerly winds causing a 20 degree or more drop in temperatures. After starting the day off in the 30s, highs will have a tough time getting warmer than the mid 50s on Saturday. Even though we are past the average last freeze date, such temperatures will be possible Saturday night into Sunday, which could necessitate the need for freeze warnings since growing, has begun. As the upper level trough quickly departs, thermometers will rebound later Sunday and Monday.