As seasonably hot conditions continue, previously higher rain chances for the week ahead have been bumped lower in our latest forecast. The tropics remain largely quiet.

Next 24 Hours: Another sultry night is ahead as low temperatures struggle to move lower than the mid to upper 70s. Skies will be mostly clear.  The National Weather Service will continue the *HEAT ADVISORY* for Tuesday as high temperatures are expected to reach 93 degrees with humidity sending feels-like temperatures to between 105 and 108 degrees. Just remember to keep hydrated. Plenty of sun is expected early but isolated showers and thunderstorms will popcorn around the 13 Parish, 3 County forecast area during the afternoon.

Up Next: Wednesday through Friday, a weak upper level disturbance in the western Gulf of Mexico from may slightly increase the coverage of showers and thunderstorms but this will be a nuanced aspect of the forecast. In the last 24 hours, the forecast has trended a bit drier for this period. Overall, no washouts are expected and rain coverage in the viewing area should be between 30 and 50 percent any given day. By next weekend, conditions could turn even drier and hotter with some highs potentially reaching 95 degrees. CLICK HERE for your full 7-Day Forecast. 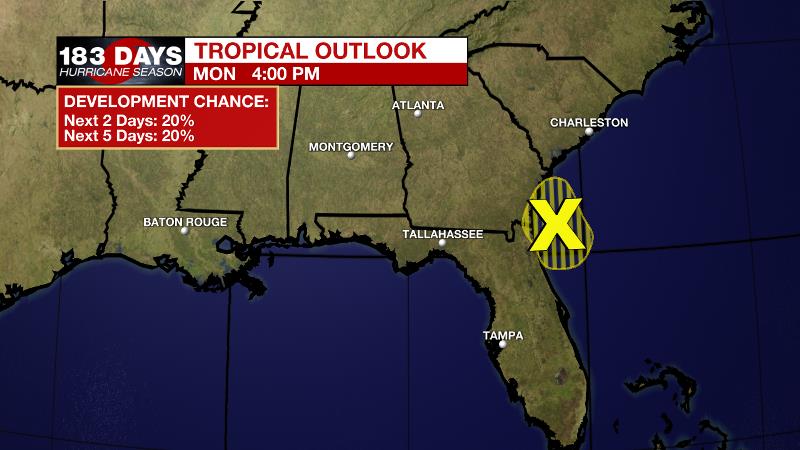 The Tropics: Satellite images and radar data indicate that shower and thunderstorm activity associated with a weak low pressure system located a short distance east of the southeastern Georgia coast remains disorganized and limited in coverage. Development of this system is no longer likely before the low moves inland over the Georgia coast later today or tonight.  Locally heavy rainfall is possible over portions of the northeastern Florida and Georgia coasts through tonight. For the latest tropical forecasts and information, visit the WBRZ Hurricane Center as we navigate all 183 Days of Hurricane Season.

The Explanation: On Tuesday, a weak upper level trough will be pushing across the Gulf of Mexico as moisture fills in across the area. Standard 30 to 50 percent coverage in showers and thunderstorms is expected during the afternoon hours. The forecast becomes a bit trickier by the middle of the week as forecast models have backed away from the upper level trough and now show the axis of an upper level ridge of high pressure building over the area from the Midwest. This would result in lower daily rain coverage than previously expected, perhaps around 20 to 40 percent. On the southern edge of this ridge, a weak impulse may ride over the area in the late Wednesday to early Thursday period to provide a slight enhancement in showers and thunderstorms. However, by Saturday and Sunday, atmospheric moisture is expected to be at or even below average for the time of year while the upper level ridge centers over the Gulf Coast. Not only will the associated sinking air push rain coverage back down to very isolated but it will also raise temperatures. Next weekend could feature highs that easily achieve the mid 90s, or higher.