So much for that cold front that was pegged to arrive at the end of this week. Two new storms have been named in the Atlantic Basin.

The Next 24 Hours: One more somewhat comfortable night is ahead. Low temperatures will dip into the low 70s beneath mainly clear skies. On Tuesday, mostly sunny skies will guide highs into the low 90s. By afternoon, a southeasterly wind switch will begin a subtle return of humidity and perhaps provide enough moisture for a stray shower or thunderstorm.

After That: The atmosphere will become much more favorable for showers and thunderstorms through next weekend. With highs in the low 90s, lows in the mid 70s and plenty of late summer humidity, the lake and sea breeze will kick out isolated to scattered showers and thunderstorms each afternoon. The activity may be enhanced by the approach of a cold front on Friday and Saturday. This same front previously thought to be the impetus for our first taste of fall temperatures. Instead, it now looks as though it will stall and allow the steam to continue in addition to creating unsettled weather. 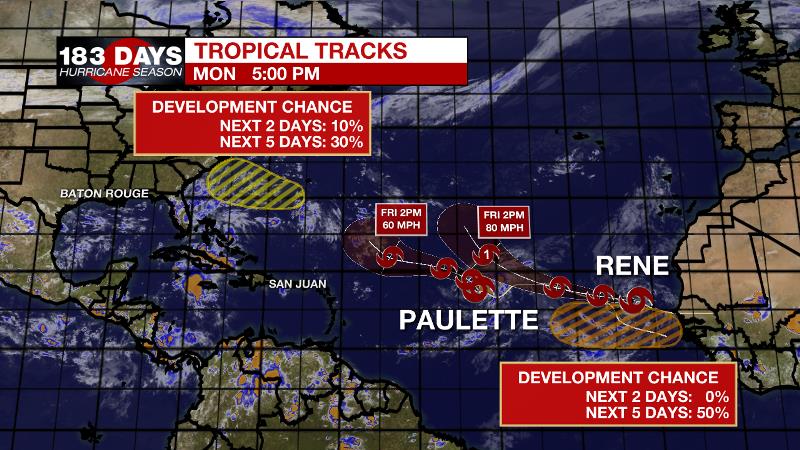 The Tropics: Tropical Storm Paulette was drifting northwest of the central Atlant5ic with 40mph winds. The storm will strengthen a bit will accelerating westward over the next few days. Also with 40mph winds, Tropical Storm Rene will bring stormy weather to the Cabo Verde Islands on Tuesday. Rene will likely become a hurricane over the next few days will moving to the northwest across the east Atlantic. Neither of these systems poses a threat to the Gulf Coast.

The Explanation: As winds turn southeasterly, humidity (higher dew points) will be reinstated across the forecast area over eh next several days. By Wednesday, this will aide an increase in atmospheric moisture to above average levels, thereby allowing afternoon showers and thunderstorms to turn on once again. Coverage may be a little greater south of I-10 and closer to marine influences. Meanwhile, a deep area of upper level low pressure will slowly advance northeast through the end of the week. This low will help to amplify an upper level ridge across the eastern U.S. The ridge will cause that upper low to ride much farther north, into the Great Lakes region. As a result, the associated cold front will buckle on approach to the Southeast. However, the vigorous trough will cut into the deep ridge and decrease any subsidence in the atmosphere. That, along with a stalling and decaying front coming into the area will cause scattered showers and thunderstorms through at least Sunday. Therefore, not only will the front not arrive in the area to create a cool down, but also lead humid and, at times, stormy conditions this weekend. Great.