Ahead of a reinforcing front, Thursday afternoon temperatures bounded back to average in the mid 80s. However, 5-10 degree below average readings will be restored Friday through the weekend.

The Next 24 Hours: Beneath a clear sky, returning northerly winds will guide low temperatures down into the mid 50s. Bountiful sunshine will result in a beautiful finish to the workweek with comfortable high temperatures in the mid 70s.

After That: A weak frontal passage will restore highs and lows in the 70s and 50s respectively right through the weekend. Another front will pass Sunday night to keep the fall feel going. Beyond that, a gradual warming trend will begin and the long-term outlook suggests we will end up back above average by the middle of next week. There is no significant chance for rain through the 7-Day Forecast. Even a few tropical systems in the western Caribbean Sea will not deliver precipitation as upper level steering winds and cold fronts should keep them south. Good. 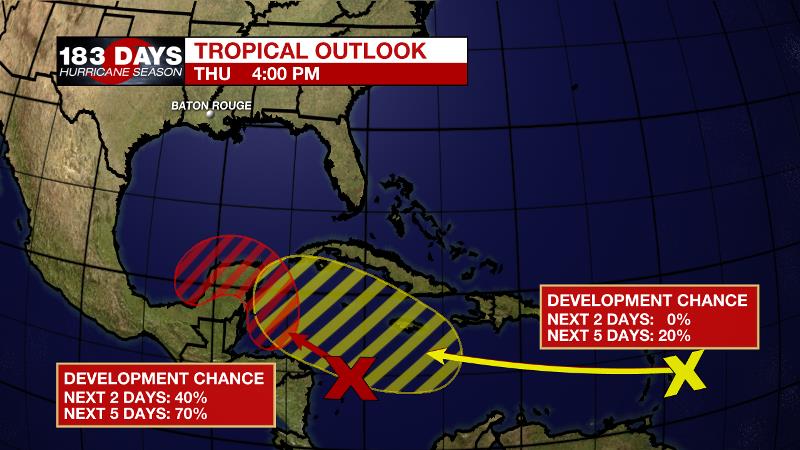 The Explanation: Well below average temperatures and sunshine will set up for the weekend. Within a broad upper level trough over the Eastern U.S., another perturbation will pivot through on Sunday resulting in a third, reinforcing frontal passage. Around this time, a tropical depression may be developing near the Yucatan Peninsula in the western Caribbean. A deep moisture feed will be funneled north ahead of yet another cold front Sunday. However, a strong upper level ridge of high pressure to the west will cut off the southern end of the front and cause any showers along the front to diminish. That ridge will advance further east, over the local area by the middle of next week, which should keep any tropical activity away from the local area. Additionally, the ridge will cause gradual warming with above average temperatures and dry conditions from the middle to end of next week. Any fall flowers or healthy lawns will need watered.