Since September 10, only one day registered a trace of rain at Metro Airport in Baton Rouge. The dry stretch will continue next week.

Next 24 Hours: If you have been enjoying the cool nights in the 50s, another one is ahead. Morning low temperatures will be near 53 degrees thanks to clear skies and light, north winds. Saturday will be sunny and seasonable with high temperatures near 82 degrees. Expect a north breeze of 5-10mph.

Up Next: The second half of the weekend will mimic the first with high and low temperatures just a degree or two higher than the previous day. Next week, morning low temperatures will moderate from the upper 50s on Monday morning to near average in the mid 60s by the end of the week. As for high temperatures, mid to upper 80s can be expected each afternoon which is at or above average. The atmosphere will stay relatively dry but contain just enough moisture for a cloud or two to form. Still, no rain chances are currently advertised through the end of next week, even as a weak cold front approaches Friday. CLICK HERE for your detailed 7-Day Forecast.

The Tropics: Hurricane Ian made a second landfall around 2:05 ET near Georgetown, South Carolina with maximum sustained winds of 85mph. Rapid weakening is expected as Ian turns northwest at 15mph and moves across the Carolinas Friday night and Saturday. Surge of 4-7 feet is expected along the South Carolina coast. Hurricane force winds are expected near the coast with tropical storm force winds inland. Rainfall could exceed 4 to 8 inches in some portions of the Carolinas leading to major flash and river flooding. 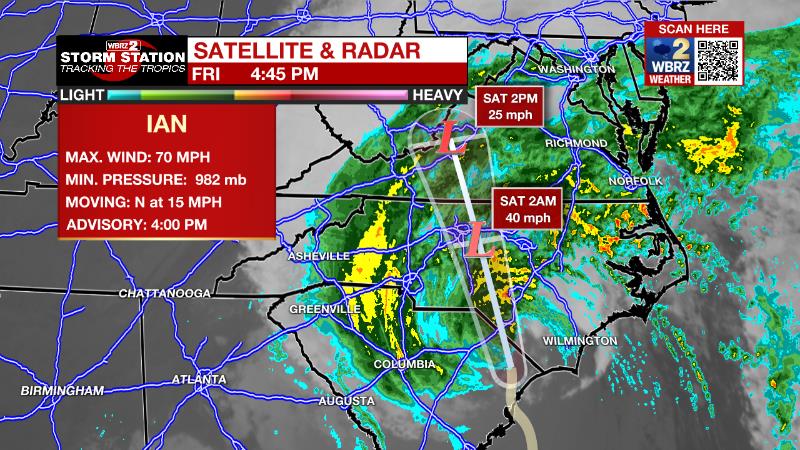 The Explanation: The local area sits between an upper level ridge of high pressure to the west and the upper low pressure associated with Ian to the east. This is bringing cool and dry north winds to the area The fall like weather will continue with cool night time temperatures and afternoon highs near normal, in the mid-80s. The sky will be clear and humidity will continue to be very low, giving us essentially no chance for rain.